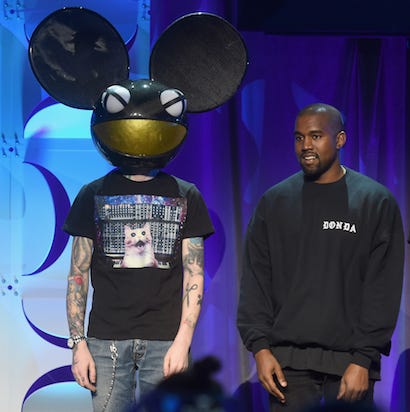 So I blogged this morning about Kanye allegedly downloading software on The Pirate Bay and how deadmau5 came at him on Twitter because deadmau5 one of the people that made the software. And I said it was only a matter of time before Yeezy struck back. And he did this afternoon.

Now listen, I like Kanye. TLOP isn’t on the level of his first few albums in my opinion, but it’s a good album. I hated Yeezus but love that Kanye has become this celebrity that just speaks his mind and shits all over people 140 characters at a time. But I think I am out on his Twitter beefs now. Beefing with rappers about how you fucked their baby mamas and #fingersinthebootyhoe hashtags are fun. Mocking a weirdo that wears a mouse head is just boring. I reserve the right to change my mind if/when Kanye starts going at bigger fish in the Twitter sea. But he has to do better than how having the name deadmau5 and wearing a mouse head is weird. Everyone agrees, Ye. That’s low hanging fruit and I don’t like fruit unless it’s absolutely drenched in chocolate. However I will say (potentially) downloading someone’s software and then mocking them on Twitter is a pretty hilarious move. If Kanye makes deadmau5 lick white dog poop, I am back in.

Update: Apparently deadmau5 isn’t a pushover on Twitter, so this may actually get fun. Still skeptical, though.