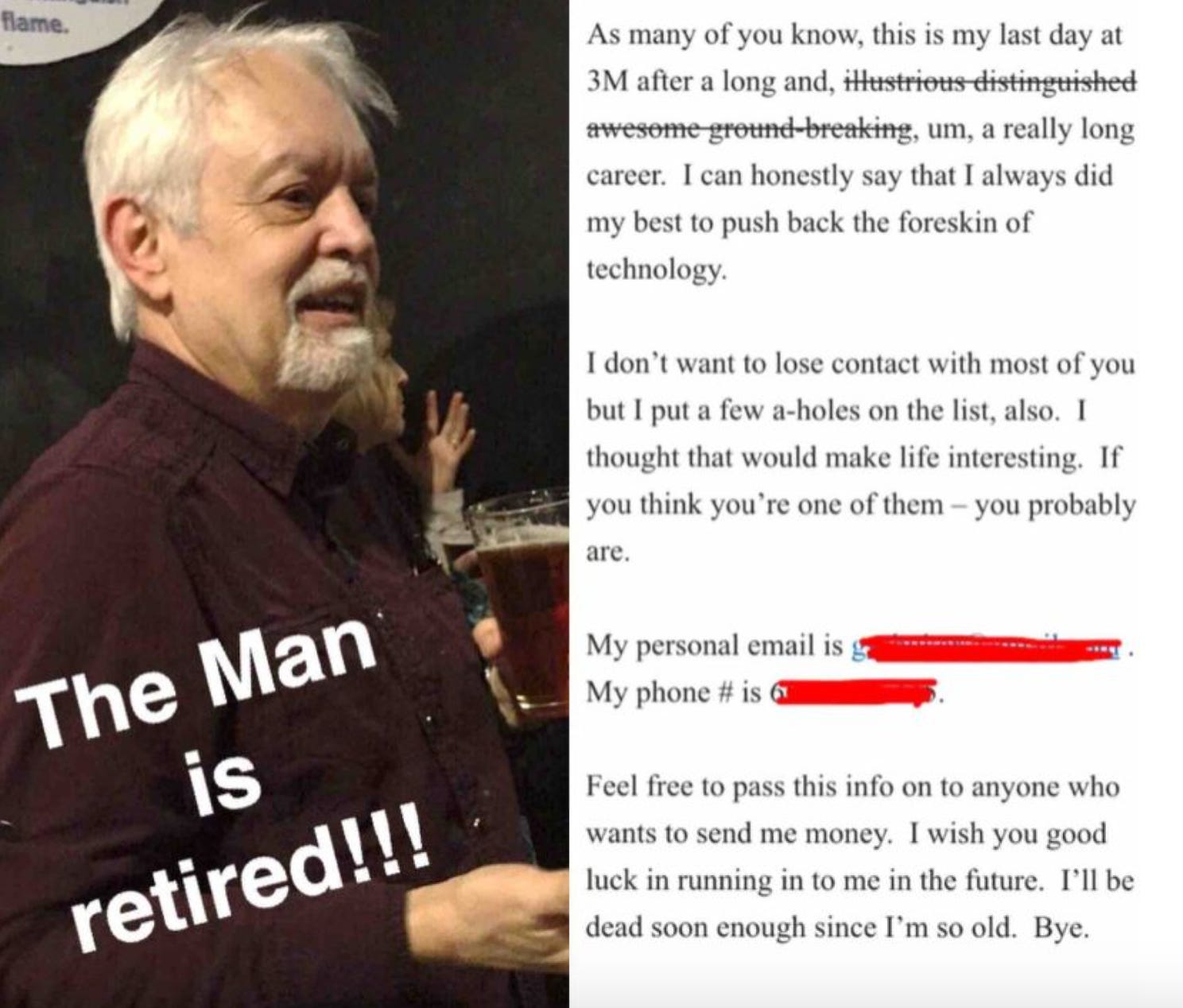 Yahoo!- One man’s retirement email is going viral after he laced the farewell with the ascorbic wit we imagine he employed throughout his long career. The email was posted to the website Reddit by user danibrin under caption: “My dad and his touching retirement email…” It was posted just 10 hours ago and has already been viewed more than a million times. It would appear that danibrin is armed with the same sarcastic sense of humour as his father, because the email is less touching and more bitingly sarcastic. Dad starts off well enough: “As many of you know, this is my last day at 3M after a long and, illustrious distinguished awesome ground-breaking , um, a really long career.” But then he gets into into the suggestive metaphors: “I can honestly say that I always did my best to push back the foreskin of technology.” Thanks for the visual, dad. Then he gets into workplace politics, by pointing out that not everyone in the office was a friend: “I don’t want to lose contact with most of you but I put a few a-holes on the list, also. I thought that would make life more interesting. If you think you are one of them — you probably are.” A sweet touch.

Just classic dad joke humor through and through. I love it. Firing off a humorous e-mail as a sendoff into retirement. Calling a few co-workers assholes but not saying exactly who they are.  Talking about how he’s gonna die soon and how they should send him money and how people would be lucky to run into him. All good stuff.  This old guy was for sure the person in the office who thought he was super funny but was only kind of funny and that’s just fine. Every office needs that guy. The guy whose sense of humor is so corny that you can’t help but chuckle. I do have one question. What the hell does pushing back the foreskin of technology mean? Is that an inside joke that sailed right over my head? I hope so. Everything else in that e-mail seemed to follow the same theme of dad humor and then he threw that monkey wrench in there. Fucking gross dude. If he weren’t already leaving they’d have to report him to human resources.

PS- If I had continued working the job I had before Barstool for the rest of my life, my retirement would go something like this. Hated that fucking place.