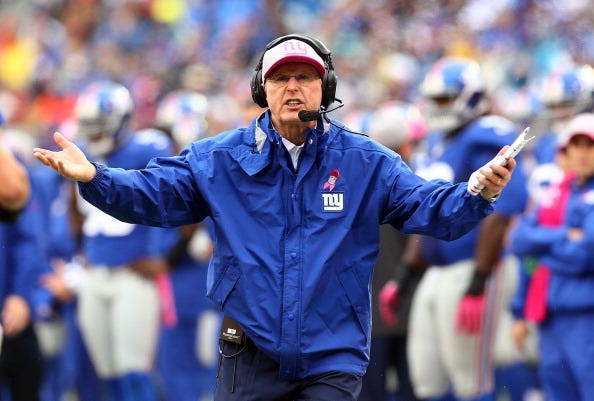 NY Daily News-  Tom Coughlin’s “resignation” as Giants head coach wasn’t really his decision after all.  In an interview with the Jay Mohr Show on Fox Sports Radio, Coughlin insinuated what many speculated at the time: the Giants pushed Coughlin out the door.

“Hey, do I agree with the move? Of course not,” Coughlin said. “It hurts. It hurts. Former is not a good word. I don’t like the word but that’s the way it is.”  Coughlin also addressed his snub of owner John Mara after the press conference, which made airwaves across social media.  “I did not snub Mr. Mara if that’s what you’re insinuating,” Coughlin told Mohr. “That’s the way I leave press conferences. Why should I hang around to answer on more less-than-glamourous question?”

Coughlin, 69, still has a desire to coach and mentioned his talks with the Eagles about becoming their head coach.  “It did not materialize,” Coughlin said. “I enjoyed going down to talk to the Eagles and Jeffrey Lurie, their owner, but soon after it just felt it wasn’t going to work.”

Thus ends the worst kept secret in the history of sports.  General Coughlin is the epitome of a guy that was going to go down with his ship no matter what.  If you told me he was the bandleader on the Titanic in his previous life, I would believe you.  So him resigning never made any sense. You would have to fire him or else he would show up five minutes early to every meeting, be the first guy in the building, the last guy out, and allow frost bite to run rampant on his face in Green Bay instead of wearing some sort of mask.  The man played his starters with nothing to gain during the last game of the 2007 regular season for Christ sake. The man has no quit in his body and is probably T.J. Lavin’s idol.

And honestly, what are the Maras going to do?  Coughlin is Big Blue football royalty.  Now you have an old man that is upset and knows you can’t really say anything back to him without looking like an asshole.  And while I wouldn’t expect it from a guy that always talked about Giants Pride, I would love to see Coughlin just air his grievances in the media like a drunk grandpa at Thanksgiving.  That was my favorite part of the flirting with the Eagles.  I don’t know if Coughlin would ever have actually coached in Philly, but I love that the Giants ownership at least had to squirm at the possible thought of it happening.

And I can’t lie, losing a guy that can get an emotion like this out of our robot quarterback can’t be a good thing.

Oh yeah and this was 100000% a snub of John Mara. Okay I don’t truly believe that, but choosing Reese over Coughlin is just as ridiculous today as it was in January.