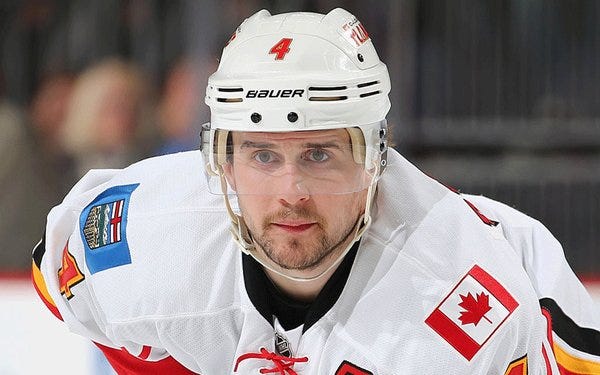 You see that guy right there? That’s Kris Russell. Looks like a nice enough guy, right? Well guess what…hockey internet HATES him. And not just because he spells his name like an idiot (sorry Kris Bryant).

That’s just small sample of probably hundreds if not thousands of tweets and blogs written with snarky comments about Kris Russell. Hockey twitter hates him because his advanced metrics, like Corsi and Fenwick, say he stinks. Now, if you’re reading this site you probably know how I feel about hockey twitter. In general hockey twitter people are a bunch of self-righteous assholes who think they are better and smarter than everyone. Naturally, they would gravitate to a “fancy stats” so they can pat themselves on the back for being an intellectual in a sport filled with meatheads. I have always liked Kris Russell. I liked him going all the way back to his days in Columbus. I didn’t have any data to back up these feelings, I just liked what I saw when I watched him. A tough little sonofabitch who could skate pretty well, blocked shots, and made a good first pass. Hockey twitter would say that makes me dumb. That using my eyes to judge a hockey player is antiquated. Welll… 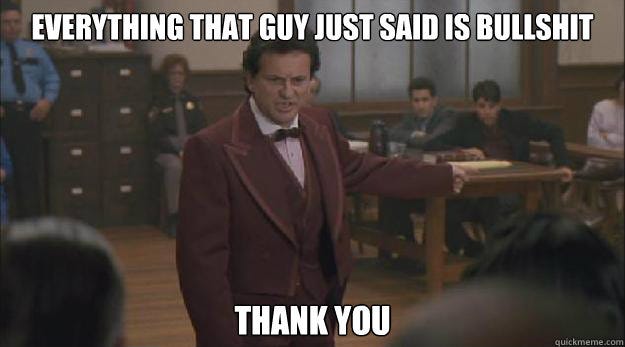 Now, hockey twitter people who like to hear themselves talk about analytics go to the same the same sites that are available to everyone. war-on-ice.com, behindthenet.ca, own the puck, etc. Yet, even though the data is compiled for them, they see themselves like this…

Now, I want to make something very clear. I LOVE data. I hate math, but I do love looking at data. I like data and patterns about anything, and I especially love data about things I’m interested in, like hockey. The people at those sites I mentioned do terrific work. They do a tremendous job of programming, tracking, and making data readily available and easily comprehensible for the masses.

When Money Ball became mainstream in the mid-2000s, people in hockey began looking for a similar tools to evaluate players in hockey. “Plus/minus” had been the standard stat used to measure a player’s overall effectiveness. Goals scored vs goals against. Hey not bad. Except…there’s at best like 6 goals scored in a hockey game. So +/- is an extremely small sample size. And one that can be corrupted by an element of luck. People began to look for a bigger sample size and they settled on shots. Much better. There are hundreds of shot attempts per game. Bigger sample size of events in a game is definitely better.

Hockey went so long without any type of analytics that corsi and fenwick(which measure the shot attempts for/against) were better than anything. The problem is that people now treat corsi and fenwick like they are everything. As I said, I like data, I look at corsi and fenwick all the time. However, hockey analytics are in their infancy. My biggest problem with judging a player based on Corsi/fenwick is that all shots are created equal. A shot from the slot is worth the same as a shot from out the blueline. How does that make sense? And there’s an old cliche in hockey that “there’s no such thing as a bad shot on goal” umm that’s a fallacy. THAT’S the thinking that’s antiquated. Most of the time a shot on goal results in lost possession. I’d rather work the puck for the right shot than settle for a one-timer from the half wall. Yet, every shot taken is a positive in Corsi/Fenwick.

Moneyball works so much more easily in baseball than it does in hockey. In baseball there are far fewer variables. Baseball is static. It’s the pitcher vs the batter and the results are easily quantifiable. Corsi, while a useful tool, is trying to cram a round hockey peg into a square baseball hole. Which brings us back to Kris Russell. There was a huge debate about him because the internet has decided that Kris Russell sucks, yet Stars GM Jim Nill said that he preferred Russell to Hamhuis. People lost their minds about that because of their reflex to look at corsi and only corsi 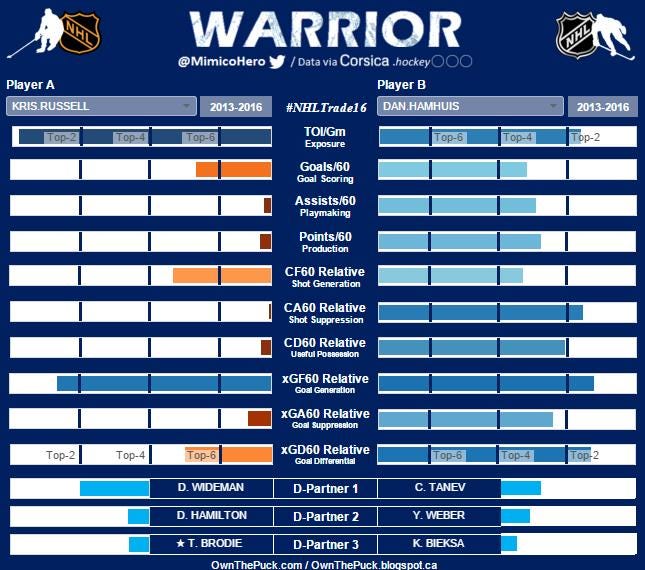 There it is, clear as day. Charts and everything. According to this site Dan Hamhuis is the far superior player. I guess the internet wins this round, but just for kicks, let’s plug in two other guys and see what we get. Duncan Keith vs Keith Yandle 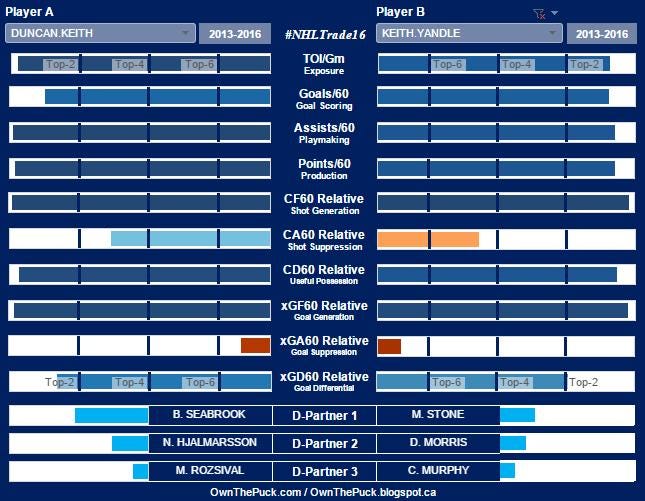 According to these metrics, Keith Yandle is just about as good and as valuable as Duncan Keith. That makes ZERO sense. That’s like adding 1+1 and having it equaling negative oranges. Anyone with eyes and a brain knows that Duncan Keith is the far superior player. Hell, Keith Yandle could barely crack the lineup in New York until recently. Yandle is a good player, not a great player. However, this chart would tell you otherwise. How can you trust a statistic that says definitively that Hamhuis>Russell, while also saying Yandle=Keith? You can’t

Elliotte Friedman had nice insight into this debate yesterday:

Marco Rubio vs Donald Trump did not have the passion of the Dan Hamhuis/Kris Russell debate. Analytic acolytes could not believe Nill preferred Russell over Hamhuis. I’ve got no dog in this fight, either guy could play for me anytime, but searched for reasons why Nill might feel this way. I’ve mentioned this season I’m down on analytics, moving toward a preference for player tracking, although one advanced stat proponent I respect warns me to discount Corsi for defencemen at my own peril.

Several teams have said they put great focus on the bluelines — how they exit their own zones and enter the opponents’. So that’s what I do. According to sportlogiq data, Russell is excellent at getting out of his own zone. If you count all of his outlet passes, stretch passes and carry-outs from there, he’s in the top 30 of all NHL defenders. His issues are offensive. He’s nowhere near as involved in that zone. Since TJ Brodie and Mark Giordano faced the toughest competition, that makes Russell’s numbers look worse. An offensively potent club could be a great fit. Time will tell. But, Nill’s earned enough capital in Detroit and Dallas to say, in the hockey battle of Jim Nill versus the Internet, I’ll go with Nill.

According to Elliotte Friedmann citing of Sportlogiq, Kris Russell is in the top 30 of ALL defensemen when it comes to actually playing defense in his own zone. He blocks shots, retrieves it, and gets it out of the zone. That’s something that should have tremendous value, but yet it is COMPLETELY overlooked by the snarky hockey twitter crowd who only value corsi.

More information is always better, and I certainly believe that Corsi/Fenwick have their place in the hockey analytics landscape. Those stats just shouldn’t be the only thing. It’s like when Aristotle came around. Started using logic, math, and studying the natural universe. He was one of the most influential minds in human history. He also thought that the Earth was the center of the Universe. Galileo comes along and says, “hey guys, I was looking at some other shit with my telescope. I think the Earth revolves around the Sun, actually”. And for that the hockey twitter of the 1500s threw Galileo in jail and called him a heretic. Hockey is in the “Aristotle era” of metrics. We are looking at things differently and that’s cool, but what is out there now isn’t the best solution. I’m waiting for stats that take into account player movement, “who touched the puck after player x touched it”, possession in the zone, shots created in dangerous areas, etc. Now, I’m a lowly blogger. I’ll leave it to the nerds to actually come up with the formulas that properly quantify player value. What I do know is that the stats everyone uses now are not good enough to definitively say  Hamhuis is better than Kris Russell.

PS: I think Stan Bowman already has found a way to quantify player value and that’s part of the reason the Blackhawks are so much better than everyone else.