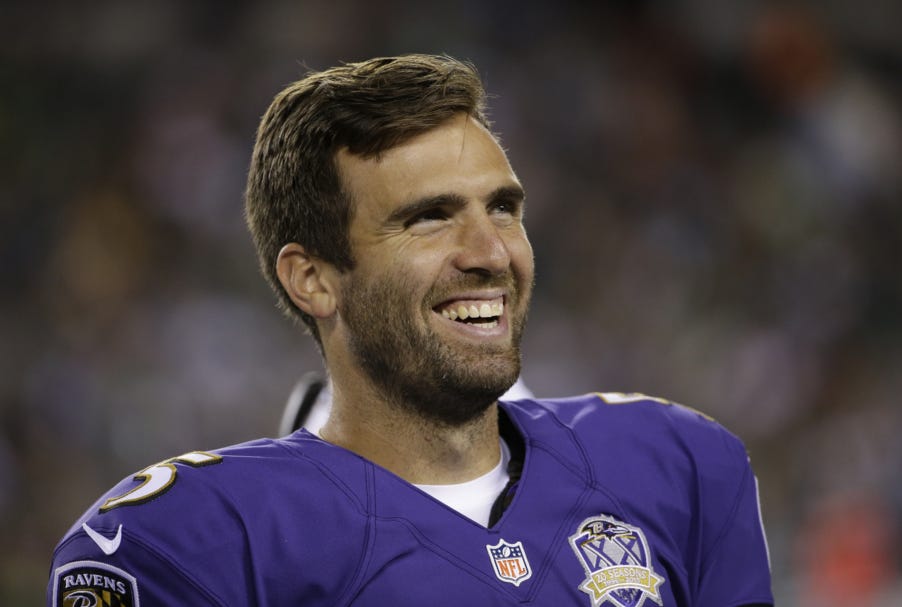 Big news coming out of 1 Winning Drive this morning as Bisciotti and Oz locked up their franchise QB for an extra 3 years. More importantly, they cleared up some much needed cap space as Flacco’s salary was set to jump to $28.5M in 2016 (and $31.2M in 2017), a number that was deemed untenable even when the contract was signed back in 2013. That “6 year, $120 million” contract that so many people bashed is basically no more. In hindsight, the Ravens just got 3 years out of Flacco for a total of $36.15 million. Not too shabby for a QB coming off the greatest playoff run in the history of football.

Herein lies the rub though. Even I can admit those 3 years from Joe weren’t outstanding. The Ravens have missed the playoffs 2 out of 3 years, and Flacco is now recovering from 2 ligament tears in his knee. What was his biggest asset, his durability, is now in question for the first time in his career. Outside of the transformation into having the finest hair in football, his value is lower across the board than it was in 2013. So the question is, will that be reflected in this contract when the long-term figures come out? Or will this contract just be a glorified restructuring of the original deal in place? Will we have to do this all over again in 2019?

Obviously the hope is this is a deal that will stand tall through 2021. It’s encouraging that negotiations went as smoothly as they did. It really shows a commitment to continuing a winning tradition in Baltimore. Flacco and his agent, Joe Linta, had all the leverage in the world. They had us by the balls. We’re talking about a franchise that was extremely QB-starved before Joe and a league where the position has never been valued more highly. If Joe wanted to be a prick and sit back and collect his checks, he very well could have. But he didn’t. He’s said all the right things leading up to these negotiations, and he’s shown his commitment to the Ravens by restructuring and agreeing to stick around into his late 30’s. And they got it done quickly and it sounds like negotiations were painless. When your franchise QB and ownership are on the same page, that’s a great thing.

That $6M in cap room will go a long way in 2016. I strongly believe that with a couple of acquisitions (secondary especially) and a year of good health, the Ravens can be right back in the mix of contending in the AFC. They have a good O-line with or without Kelechi Osemele (who I think they’ll be able to retain with this cap space which is great because the dude is a fucking bully), a great front 7 when Suggs and Dumervil are both out there, and some young talent for Joe to throw to. Throw in two top 40 draft picks and this team will be rejuvenated with enough young talent to avoid a full-blown rebuild in the near future. This deal had to happen before we could proceed with the offseason and that got done today. Now let’s go have an offseason.