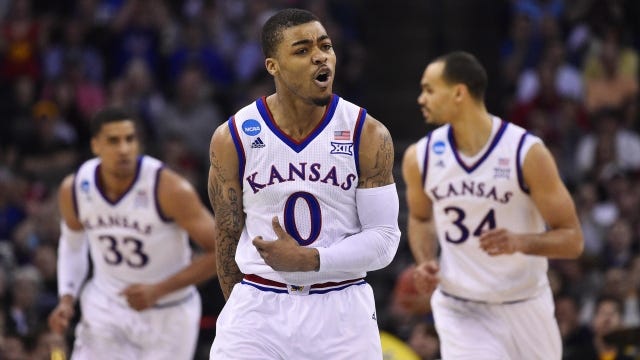 A lot of talk come March is always who is on the bubble. People feel outraged that a certain school didn’t make the NCAA Tournament while typically a school in a major conference gets the benefit of the doubt for the last spot.

Well, we’re not going to talk about that at all today. Simply because we have a 10-team race for four No. 1 seeds. We’ll take a look at what 10 teams are still alive for a No. 1 seed and their path to get that coveted top line.

A lot of people will say a No. 1 seed doesn’t matter this year because of how open college basketball has been. That’s completely false. You’re still getting the easier path to the Final Four along with first dibs into pods, which results in less travel and more likely a homecourt advantage. So what 10 teams are fighting for those spots?

Kansas – The Jayhawks have all but wrapped up one of the No. 1 seeds, really it’s just a matter if they are the overall No. 1 seed or not. They won the Big 12 – one of the few conferences where the regular season title matters because of round robin play and are considered the best team in college basketball right now. The only way they fall out from a No. 1 seed is to lose to Iowa State on Saturday and then in the quarterfinals of the Big 12 Tournament with things happening in other conference tournaments. Kansas should all but prepare to be a No. 1 seed playing in Des Moines.

Oklahoma – The Sooners looked like a lock for a No. 1 seed in mid-February before losing three games. There’s still a shot for Oklahoma to get to the top line and it’s really not that tough. They need to take care of business at TCU on Saturday and then win the Big 12 Tournament. That alone would give them the nod thanks to likely wins over Texas, West Virginia and Kansas. That coupled with no losses outside the top-50 and 13 top-50 wins (assuming they beat three teams playing to seed) would make it hard to leave them outside of a No. 1 spot. They can also get in if they lose to Kansas in the Big 12 Finals and Xavier/Villanova don’t win the Big East Tournament, opening up a spot for a second team from the same conference to get a No. 1 seed.

West Virginia – West Virginia is one of the teams flying under the radar, but they are currently second in the Big 12 – the best conference in America. Note, it’s worth looking at the Big 12 regular season more than some other conferences due to the round robin play and giving a true measuring stick during conference play. The Mountaineers don’t have a bad loss – the worst loss being at No. 45 Florida. They do have two chances to pick up quality wins over the season playing Texas Tech and traveling to Baylor. If they win those they are the No. 2 seed in the Big 12 Tournament. Same rules apply for them as it does to Oklahoma. If they win the Big 12 Tournament, they are a No. 1 seed. If they make the finals, they need help elsewhere.

Villanova – Everyone will dismiss Villanova as a No. 1 seed because of the last two NCAA Tournaments. Again, you can’t do that with seeding as it’s a different team each year. Nova won the Big East regular season – a conference where the regular season matters. A loss against Georgetown on Saturday doesn’t hurt them as long as they win the Big East Tournament. That’s really all it is for Nova. Win in New York and you’re back in Brooklyn as a No. 1 seed come March 17/18.

Xavier – Just like Villanova, win the Big East Tournament and you’re a No. 1 seed. The Muskies set themselves up with a perfect nonconference schedule, with quality wins. They didn’t get great wins, but they did beat Michigan, Alabama, USC, Dayton and Cincinnati before getting into conference play. During the Big East Tournament, Xavier can pick up another quality win against Seton Hall. A 26-4 regular season record is nothing to talk bad about.

Virginia – The Cavaliers looked lost when they started ACC play losing at Virginia Tech, Georgia Tech and Florida State. Then the Wake Forest game happened. When UVa looked dead, Wake Forest did what Wake Forest does. They missed FT’s and absolutely choked the game away to where the Cavs could steal a game-winning banked three. It turned the season around as Virginia won its next four. A win against Louisville on Saturday and a loss by Miami to Notre Dame or Virginia Tech and UNC losing at Duke makes it a 3-way tie for the ACC title.

Miami – A team like West Virginia in the sense people don’t realize how good Miami is. If you erase the one-point loss to Northeastern, Miami had a perfect nonconference schedule with wins against Utah, Butler and Florida. People will look at the one game against UNC and automatically dismiss Miami. Let’s not forget they have wins over Virginia, Louisville, Duke and Notre Dame in ACC play. A regular season conference title, puts them in decent shape for a No. 1 seed, as long as they make the ACC Finals.

UNC – Perhaps a team a lot of people have penciled in for a No. 1 seed already is UNC. However, if they lose to Duke they’ll need a lot of work. The lost to Duke means UNC would be 5-5 in the last 10 games heading into the ACC Tournament. The only way the Tar Heels would be a No. 1 seed would be to win the ACC Tournament – which has a little more weight than just the regular season. The downside to UNC’s resume? Only two quality wins in nonconference play.

Michigan State – This is considered the second best team in the country right now and that’s hard to argue with. The Spartans are 24-5 overall and 11-5 in Big 10 play – good enough for second in the conference. There’s plenty of quality wins including ones over Kansas, Providence, Louisville and Florida in the nonconference. Wins against Rutgers and Ohio State to close the year leaves Michigan State at 26-5 and the No. 2 seed in the Big 10 Tournament. Winning the Big 10 Tournament guarantees a spot, getting to the finals and losing to a team not named Indiana probably keeps them as a No. 1 seed too.

Indiana – Well, here we are Hoosiers fans. You took advantage of the Big 10 scheduling, beating teams that you were supposed to. The resume isn’t great, with losses to UNLV , Wake Forest and Penn State, but the road win against Iowa solidifies it a little bit. Beating Maryland on Sunday helps more than even winning the Big 10 regular season due to the unbalanced schedule. However, because of the bad losses and lack of great wins Indiana needs to win the Big 10 Tournament to get a No. 1 seed. If they win out, it’s hard to imagine they don’t get the top seed after beating Maryland, Wisconsin/Purdue and likely Michigan State/Maryland again.