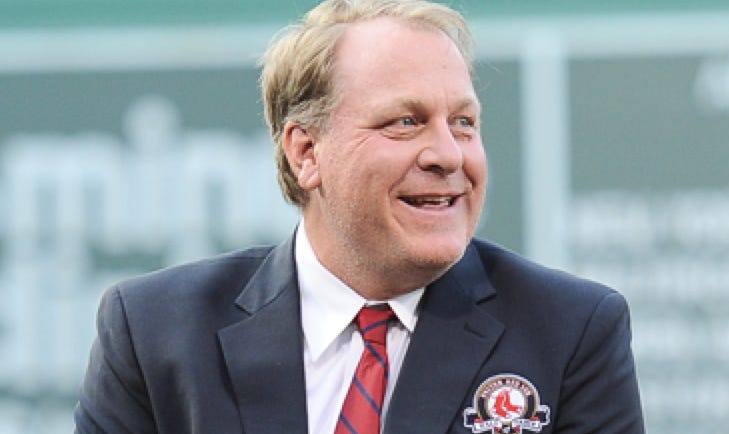 (Yahoo) — Schilling spent a good chunk of his Super Tuesday doing an hour-long radio interview with 610 Sports in Kansas City. If you give Schilling 60 minutes to talk about anything, there’s a good chance something will make someone cringe. Such is a reality of Curt Schilling with a live mic in front of him — or a keyboard, really, since it was his social media use that got him suspended from ESPN at the end of the 2015 season. He doesn’t apologize for it either. He’s actually kind of proud. That brings us to Tuesday’s interview in which Schilling devoted about eight minutes (starting near the 28-minute mark) to talking about Clinton, Republican frontrunner Donald Trump and the various things that scare him for the future of America. The interview, though, was at its most provocative when Schilling railed on Clinton. “If she’s allowed to get to the general election before she’s in prison I’ll be stunned and upset,” Schilling said. “Because I think she’s shown her true colors all along the way and I’ll ask you this: Do you see her being anything even remotely different than what we’ve had? I don’t care what her titles are,” Schilling continued after host Danny Parkins listed some of Clinton’s credentials. “She’s done nothing. She’s done absolutely nothing to further the success of the middle class. She jumps on the backs of people who she wants to be dependent on government. She needs these people to be dependent on her.” Parkins then asked Schilling whether he thought Clinton should go to jail: “I hope she does. If I’m gonna believe, and I don’t have any reason not to believe, that she gave classified information on hundreds if not thousands of emails on a public server after what happened to General Petraeus, she should be buried under a jail somewhere.”

So this is making the rounds today. Curt Schilling says Hillary Clinton should be “killed,” at least that’s how people are acting because he said she should be buried under a jail, like that’s not just a phrase people use to describe bad people or folks they don’t like. Look, does Clinton deserve to be in jail? I haven’t the faintest idea. They haven’t covered her emails on PTI or Always Sunny yet. But this whole “every time Curt Schilling says anything it’s a hot take” shit is so annoying. Perhaps I’m a bit biased, I’ll always love Curt Schilling, he brought an end to “The Curse” and therefore he can essentially do no wrong in my eyes. Curt will forever be the uncle I love but is a bit out there. Any crazy facebook post gets the “I’m not sure that’s accurate but you got me an awesome Christmas present once, so sure,” response from me. But this shit right here just isn’t that inflammatory. He doesn’t like Hillary Clinton, he’s a republican, big fucking deal. Stuff like this certainly doesn’t deserve coverage from Yahoo to Deadspin.