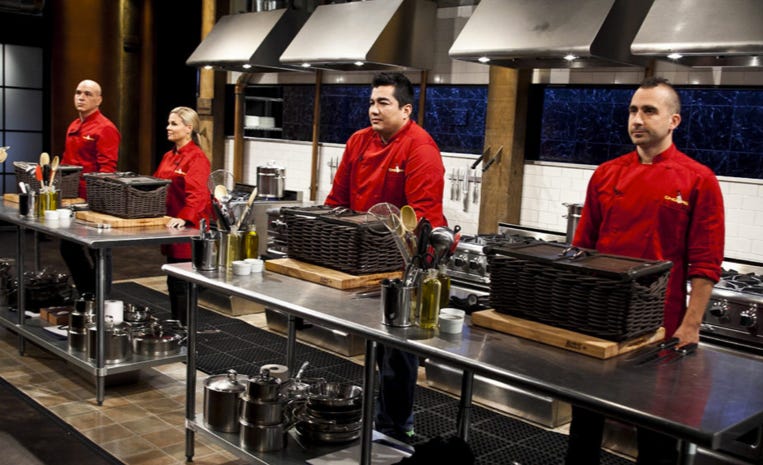 As everyone knows, I’m a huge Chopped fan. Huge. If Chopped is on television, I’m more than likely watching it. If Chopped isn’t on television and the Caps aren’t on, I’m probably catching up on DVR. It’s not just that it’s an entertaining show, it’s everything that goes into it. When the chefs on Chopped are good, they do some things that are absolutely mind blowing. The genius cooking that some people are capable of is simply astonishing to watch. If you haven’t gotten into Chopped yet, there’s something like…I don’t know…9,000 episodes in the back-catalog to get you started.

So with that being said, there’s one thing that makes me lose my mind more than anything that happens on that show, or any other show for that matter—-When a stupid ass motherfucker forgets a fucking ingredient. Case in point, this episode I was watching last night. After finishing watching the Caps beat the Pens, I flipped over to Food Network, as is tradition. And low and behold there were a few episodes on that I’ve never seen before. And let me tell you what I saw—-this one chef in her intro said she hates when she watches Chopped and chefs fuck up. She said you shouldn’t even be there if you can’t do the basics. I was like “yeah gurllll, go ahead gurllllll”…fully knowing this was foreshadowing at it’s finest. Fucking Shakespeare couldn’t have written foreshadowing that well. This bitch proceeds to not only forget an ingredient in the appetizer round, but then purposely didn’t plate an ingredient in the entree round because she fucked it up and didn’t have a plan B. YOU ALWAYS HAVE A PLAN B, WATCH THE SHOW ONE TIME FOR ME! And to make it even better, the only reason she didn’t get booted after the appetizer round was because…brace yourself…one of the ingredients was a particular type of egg, and another chef, for some ungodly, unbelievable reason, used a different type of egg from the Chopped fridge, instead of the eggs provided in the basket. My jaw hit the floor. I had never, in my many, many lonely Friday nights sitting on my couch watching Chopped by myself, seen a chef do something so stupid.

Look- you are given a basket of 4 ingredients. FOUR. You’re a professional chef and all you have to do is get 4 ingredients onto a plate. There is nothing that makes me yell at the TV more than when a chef forgets an ingredient on Chopped. Nothing. You have months to prepare for your appearance on Chopped. You generally know your basket is going to have a meat, something sweet, probably something spicy, and something random. I listen to FP do commentary on baseball games 162 times a year and that doesn’t bother me as much as when a chef leaves out an ingredient (if you’re not a Nats fan, believe me, this is a huge deal). And even worse—-when every other chef includes all 4, but the person who forgets one still moves on. I want to jump into my TV Pleasantville style and strangle the judges when they do that. Do not reward stupidity! I don’t care if one of the other chefs took a dump on the plate, as long as all 4 basket ingredients were mixed up in the shit, they move on.

I’m still holding out hope they do a Blogger episodes and I can live out my dream and compete in the Chopped kitchen. I’ve sent some emails about it, maybe this whole move to NY thing will help? A guy can dream. Hopefully my enemy Scott will be there. I want to give him plates of raw red onions until his head explodes.