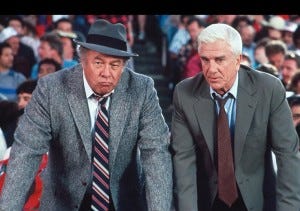 George Kennedy, the burly and beloved actor who served as an everyman bridge from baby boomers to their children, died yesterday at 91. “He passed Sunday morning, due to old age and some health issues,” his grandson Cory Schenkel said.

I’m not sure if Hollywood considers him a legend but he’s a legend in mine and my old man’s houses. Though he worked consistently over the last two decades as well as before his major breakthrough, his career is essentially bookended by two classic films 21 years apart that became cultural touchstones for very different reasons.

In 1967, Kennedy and his intimidating size were perfect as Paul Newman’s foe-turned-friend Dragline in the sublime “Cool Hand Luke”. The movie, about an unruly, devilishly handsome bad boy in a Southern prison camp, served as a great metaphor for rebelling against authority at a time of great upheaval in the United States when many Americans were doing just that in their own way. It’s also earned Kennedy his lone Oscar nomination for Best Supporting Actor, which he won. And he might have earned half of it in this classic scene.

Then in 1988, he played the straight man Ed Hocken to Leslie Nielsen’s bumbling Frank Drebin in the fantastic, hysterically funny “The Naked Gun”. The chemistry between the police partners gives the movie its heartbeat and Kennedy’s deadpan earnestness is as funny as Nielsen’s pratfalls. “Airplane!”, in which Nielsen played the doctor, set the standard for comedic parody in 1980 when the Zucker-Abrams-Zucker trio created one of the funniest movies ever put to film. And it still holds up 36 years later. So when “The Naked Gun” came out and felt like it maybe delivered just as many laughs as “Airplane!”, you knew it was an instant comedy classic. Even now, O.J. can’t ruin it. And Kennedy was a big reason why.

Even though he’ll be remembered fondly for the roles above, he also has an impressive IMDb page peppered with roles he imbued with his gruff decency. Like many of his peers in the ’70s, he jumped aboard the disaster flick train and played Joe Patroni in “Airport” and the increasingly ridiculous sequels. Ironically enough, “Airport” was the movie being spoofed in “Airplane!” by his future cinematic cop partner. If you wanna kill time on that site, look up some of the casts of those disaster flicks. Hollywood royalty doing late-in-life cash-ins.

Kennedy also had a couple of TV series flameout in the ’70s while appearing on everything from “Fantasy Island” to the priest in Chuck Norris’s “The Delta Force” before hitting pop culture paydirt once again. A little more info from the NYT…

Kennedy was born in New York in 1925. He started acting at the age of 2 when he joined a touring company production of “Bringing up Father.” Five years later, he became a disc jockey with a kids radio show.

He enlisted in the Army at 17 and served in World War II, opening the first Army Information Office that provided technical assistance to films and TV shows. Kennedy spent 16 years in the Army and left as a captain.

Kennedy wasn’t a big star but rather he had a regular guy appeal that made you always take note of him and think he’d be a good guy to have a beer with. And take note we did. They may be two of the most disparate films to be linked together but “Cool Hand Luke” and “The Naked Gun” are 20th century pieces of art that don’t happen without George Kennedy’s sizable contributions. Take care, Dragline. Hopefully Lucille is waiting for you.