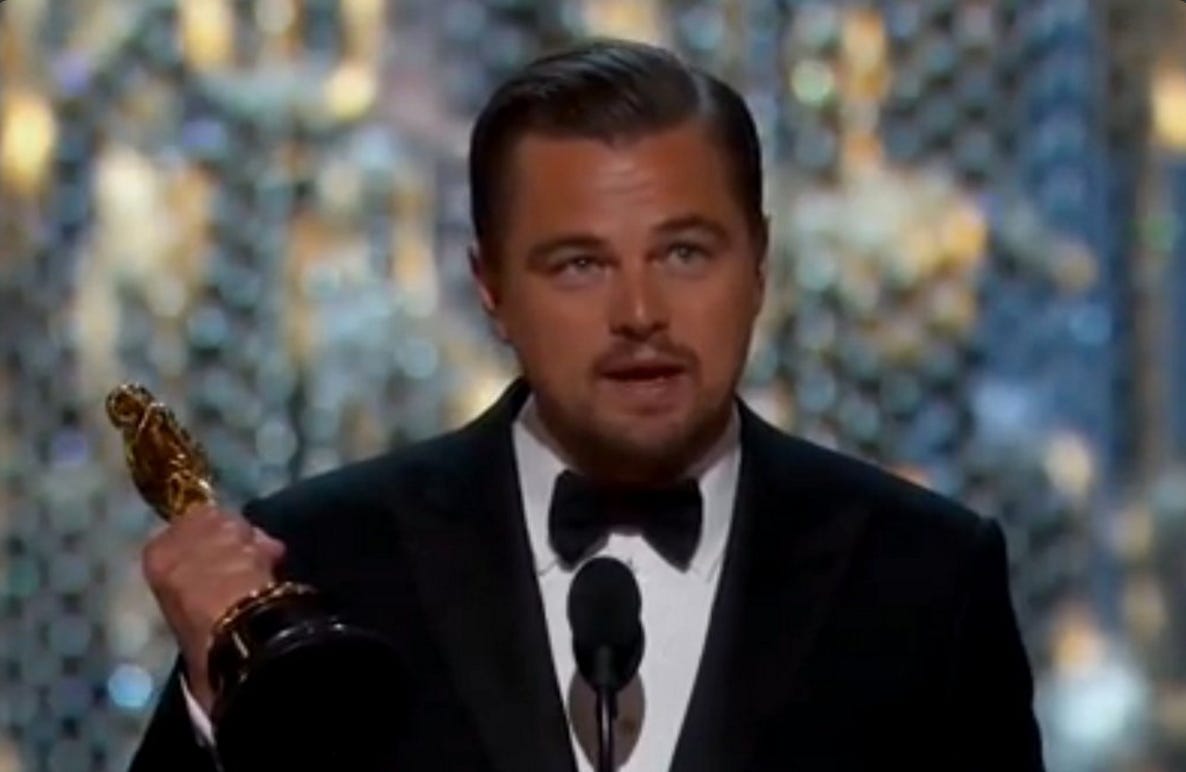 The Oscars. The longest, slowest, stuffiest, most boring awards show in the world. Its almost impossible to be as boring as the Oscars. Gather all of the most entertaining people in the world into one room and somehow it ends up being the worst 4 hours you watch. No musical performances like the Grammys. No body getting drunk like the Globes. Just a bunch of the Hollywood elite sniffing their own farts. This year was pretty much just about getting to Leonardo Dicaprio and the rest was just filler about black people and sexual abuse. It was a real fun show!

We began with Chris Rock’s monologue which made all the white people uncomfortable.

There was enough white guilt in that room to power the Civil Rights movement for the next hundred years. At one point Chris Rock actually got the entire crowd of rich white people to start giving money to little black girls:

It was all under the guise of selling girl scout cookies, but make no mistake, this was pretty much just White Hollywood paying reparations to black people.

The race stuff was a…black…cloud thats been hanging over the Oscars ever since the nominations came out. I think on the one hand its a little silly because most of the people upset are millionaires that play make believe for a living and a lot of the lack of nominations is really just a numbers thing, but on the other hand the white people outraged by black people being like “well this is a little fucked up” is just as silly. So its a precarious situation to navigate, but I think Chris Rock did a good job. The racial part of his monologue went on probably like 3 minutes too long and I wondered if we were going to talk about anything other than black people for the next 4 hours, but overall I thought he did a great job of politely poking fun at a touchy subject. I thought the sorority racist line summed it up best. “We like you Rhonda…you’re just not a Kappa.” That really is Hollywood with black people. They dont actually dislike them or intentionally discriminate but they’re like ehhhh, its easier if we just keep doing what we’ve always done. That was true and it was funny, much like Rock’s entire performance.

The best skit of the night would have been Chris Rock talking to black people about the Oscars, if Caleb hadnt done it, and done it better, 24 hours earlier:

I’m pretty sure this woman:

May have set the whole civil rights movement back a few decades.

Cmon now, people. Black folks are getting their own inside jokes at the Oscars. Enough with the discrimination talk.

And then after all the talk about diversity and inclusion and fixing the problem, Chris Rock just brought out a bunch of Asian kids and made a joke about them being nerds and child laborers:

Because lets be honest anybody being like “There were no Oscar nominations for Asians either!” can kick rocks. Nobody cares about Asian discrimination. Theres a bazillion of you out there and you always do whatever you want anyway, no matter how socially unacceptable, so it really is hard to muster up the racism sympathy for the Asians. White people, black people, Latinos, everyone, can appreciate a good old “Asians are good with numbers and/or work in sweat shops” joke. Well done, Chris Rock. Well done, Academy!

Oh and also we had multiple Suge Knight jokes:

Because after all that shit about how we need to come together as a people and everyone needs to live in harmony, nothing is funnier than hundreds of people laughing at a dude who has murdered many, many people – most recently a dude with his car. Good times, great oldies at the Oscars!

Anyway enough about the racism stuff. A big piece of Awards Shows are hot bitches. And last night that started and ended with Rachel McAdams: 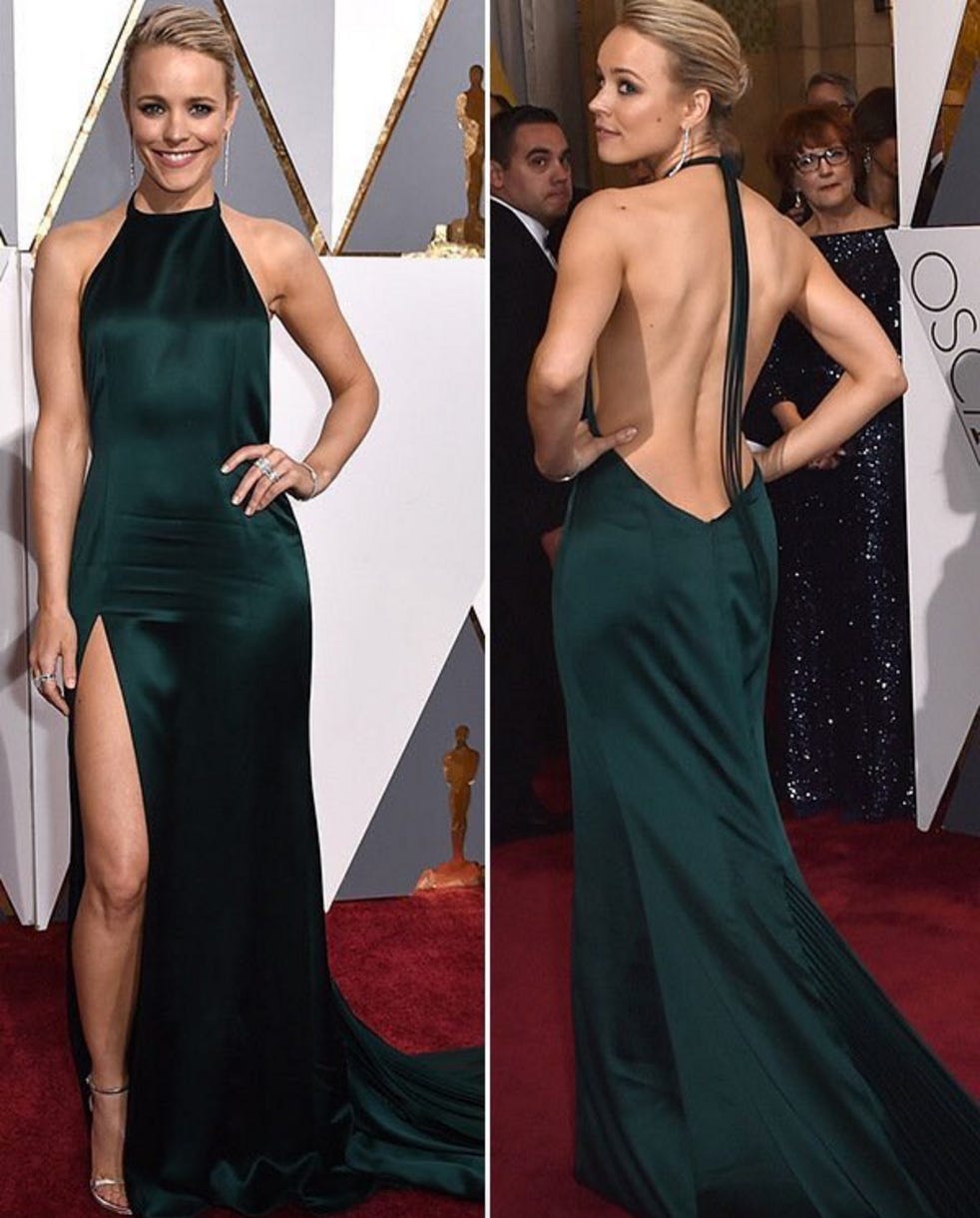 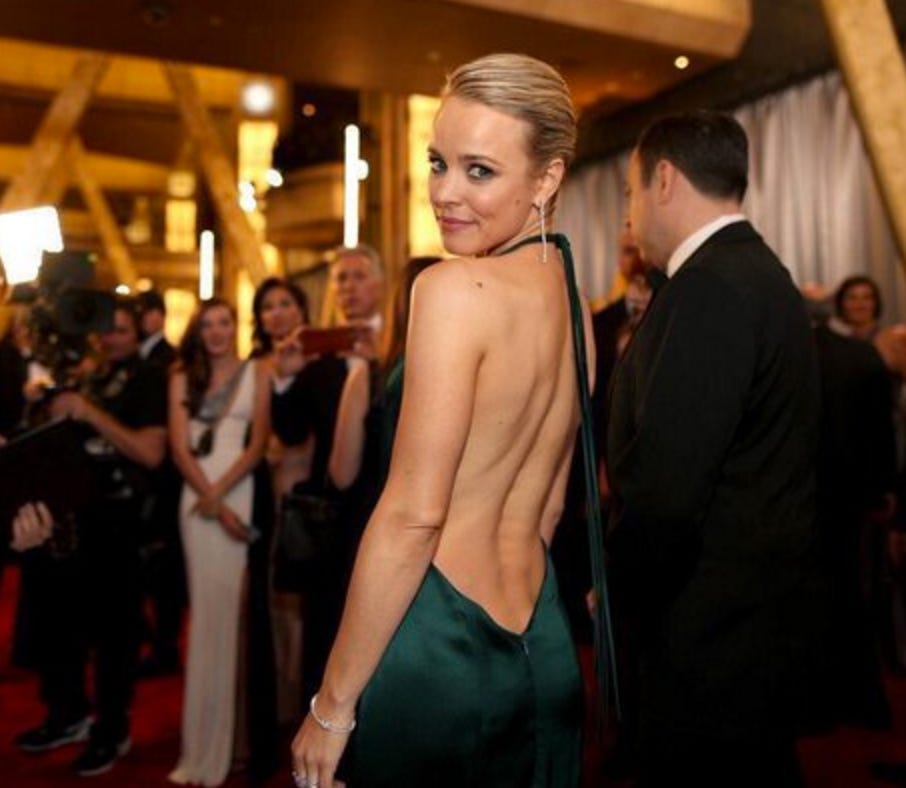 Slit up to her V, plunge down to her butt, just looking absolutely FIRE. Olivia Wilde brought the noise, Charlize Theron looked good, but the room is basically filled with people dressed as conservatively as possible at the Oscars. Rachel Mac set the place on fire with that skin looking sexy as fuck.

As for the actual awards themselves, Mad Max won like 500 times. Spotlight won Best Picture. The funniest moment of the entire night was Louis CK presenting the nominees for Best Documentary Short and making fun of how poor and insignificant they all are:

But at the end of the day this was about 3 people in 3 different categories. 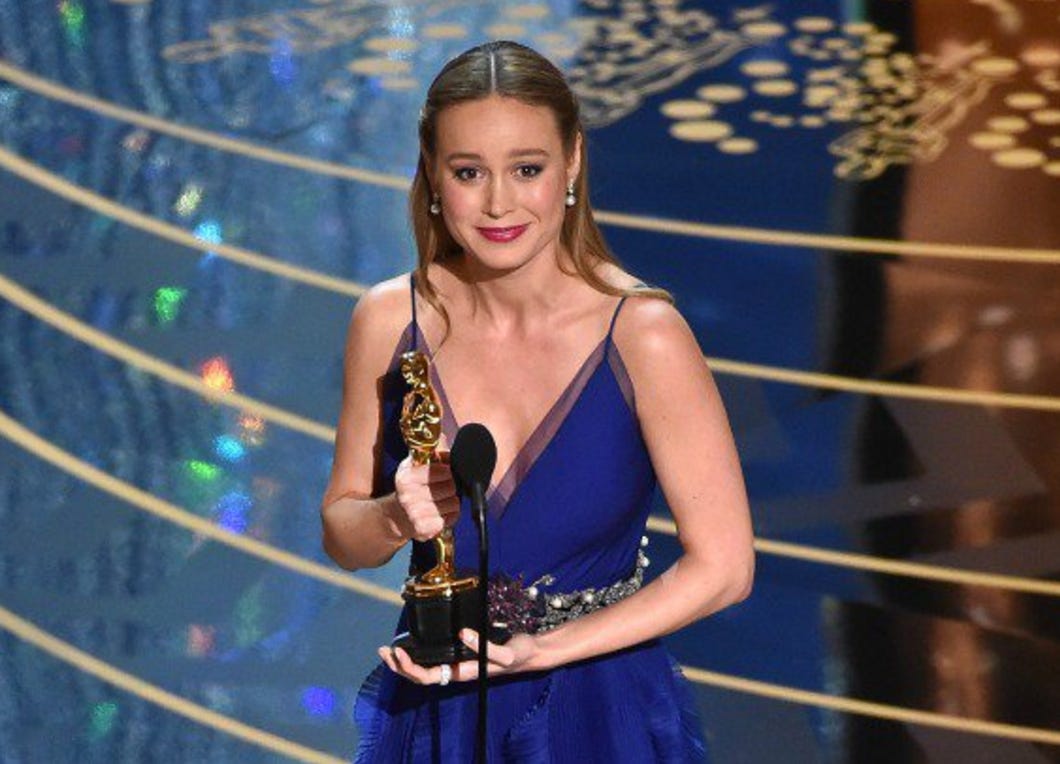 To borrow a term from the old guard of Barstool Sports, Brie is a total Potato Sack Smoke. The Girl Next Door type who was catapulted into super stardom with her performance in The Room. Every guy wishes they were that little dude who acted right alongside her: 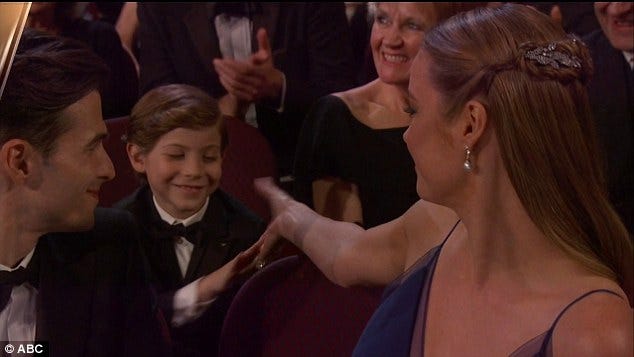 And we all hate her actual boyfriend:

2) Sylvester Stallone. This reaction when the Bridge of Spies guy won was heartbreaking:

Listen Creed was a fucking awesome movie but probably overhyped when it came to Oscars talk. Simply because movies like that dont usually win. Movies like Bridge of Spies with Tom Hanks and Steven Speilberg that like 25 people total saw win Oscars. Stallone was fucking awesome in that movie for anyone with a normal brain and heart who likes normal movies. That award should have been a Lifetime Achievement Award for Sly for the bazillions of people out there who loved him as Rocky and Rambo and John Spartan and shit. In hindsight there was probably no way he beat that guy who won or Tom Hardy but I got my hopes up and I think Sly did too.

Everyone saw it coming 2 million miles away. Everyone kind of agreed that Revenant wasnt all that great and that this wasnt even Leo’s best performance. But everyone just wanted to fast forward to this moment and see Leo finally get the trophy he deserved the 6 other times he was nominated. And then after fucking 25 years of waiting, Leo’s hippie ass gets up there and talks about Global Warming. Get outta here, Leo. Nobody wants to hear about climate change. Everyone wanted to see you take your dick out alongside that Oscar trophy and saw how much you deserved this after half a dozen snubs and living outside in the snow for like a year filming this shit. Nobody cares about the environment. Tell us you’re about to put that trophy inside of some model’s ass in San Tropez and drop the mic and bounce. “Fuck you Academy!” 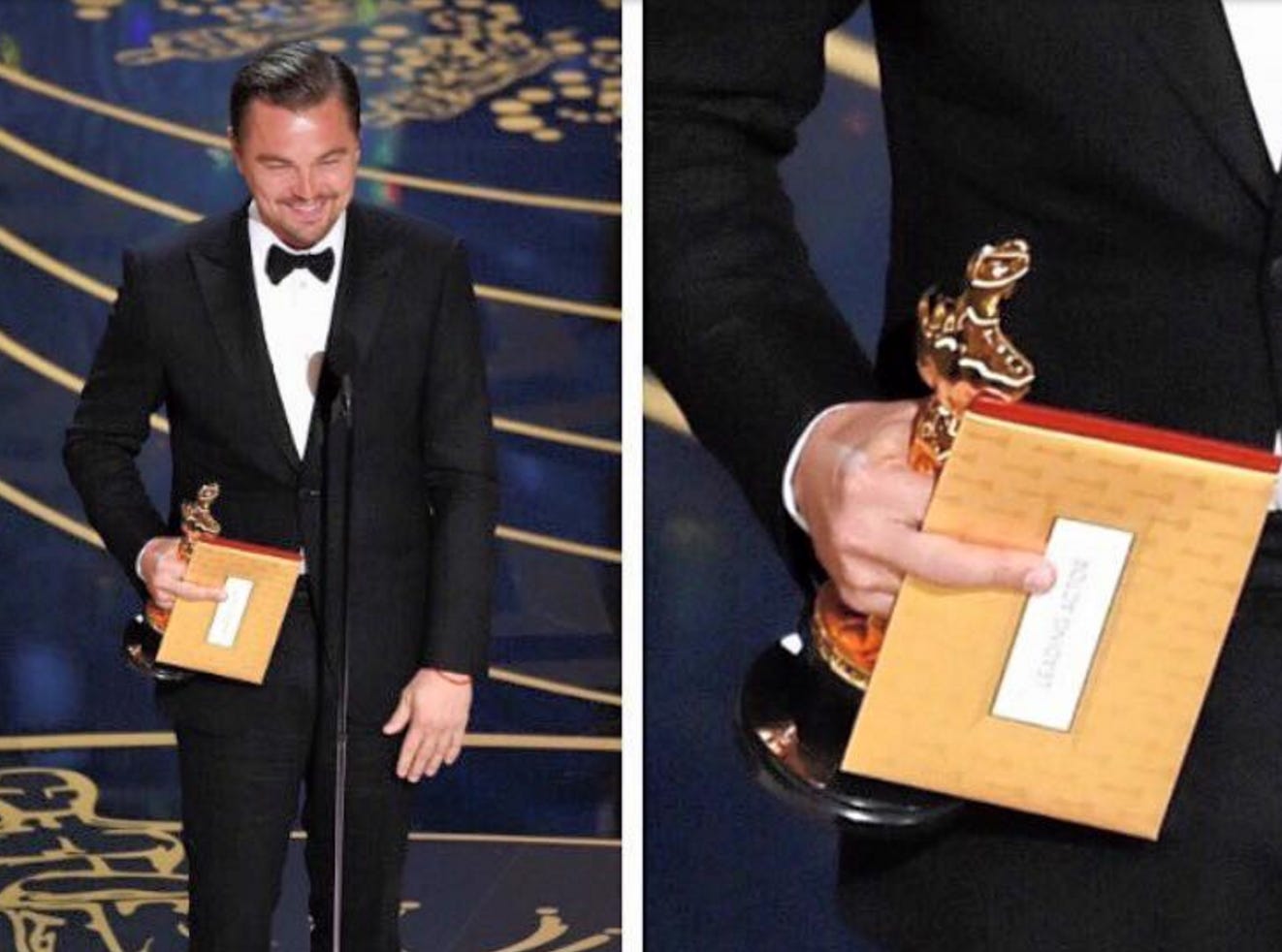 Cool and down to earth moment for Leo though as he got his trophy engraved:

“You do this every year? I wouldnt know”

And thats why people like Leo. He’s a brilliant actor and he spends more time inside of supermodel vagina than you do at your desk job but somehow he always comes off as a cool and normal dude. Glad to see him get the monkey off his back, even if it was for one of his lesser (I use the term very loosely) roles. I hope his next movie is some cheap ass stoner comedy with naked chicks everywhere and what not. Dude deserves to have some fun on a movie set for a change.

Alright this blog is about as long as the Oscars themselves. I guess I’ll see everyone again for the MTV Movie Awards. When Stallone wins like a thousand of those he’ll probably wanna kill himself.