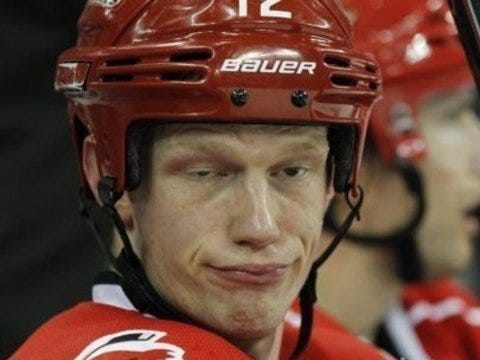 I argued against this trade all day today – mainly because of what the expected price tag could be. The Rangers said they wouldn’t include a first-rounder so names like Kreider & Hayes were kicked around. I couldn’t see how moving a currently-rostered young piece for a 31-year old on the decline made sense. I still have my reservations about Eric Staal and how he’ll fit in NY, but I’m HIGHLY relieved at what the Rangers ended up paying. Second-rounders still have value, sure, but it’d be tough to expect the Rangers to improve anywhere without parting with at least one. Aleksi Saarela is a legit prospect – but the key to any trade was for that name NOT to be Pavel Buchnevich or Brady Skjei. It’s not, so I’m happy. Carolina is also eating 50% of salary to make it work.
Now how does this trade actually help the Rangers? I’m not sure. Staal’s skill set is as a center where the Blueshirts are already set with Brassard & Stepan. I’d be a little surprised if Staal was targeted for a bottom-six role. So if he slides over to wing & fills out that last rotating spot in the top six, he’d assumedly bump Fast & strengthen their depth for sure. But he’d be playing a position where he won’t be as effective as he can be (although I’ll bet he’ll take plenty of draws as a guy who’s won well over 50% for years). His even-strength goals, assists & points per 60 have all declined every season since 2012-13. He’s got just 1 PPG despite almost 3 minutes of PP time per game. Hard to believe he’ll help there. He doesn’t kill penalties, is another left-handed shot & although he’s a big body he doesn’t throw it around that much unless you’re his little bro:

Staal has watched the NHL playoffs from his couch for the past 6 years so it’s hard to gauge what he’ll bring for the post-season. He’s a leader & a very responsible possession player, sure, but the fact is Eric Staal has shown absolutely nothing recently that predicts he’ll be the piece NY has been missing. The ONLY potential positive is that the promise of playoff hockey reinvigorates a former stud now exiting his prime. Maybe he clicks instantly with whoever his new linemates end up being. Something major has gotta change though for a guy with 2 goals in 2016 and 1 PP point since early December.
That’s a big “if” to mortgage any part of the future on even if it’s not a first-rounder or the pair of “untouchable” prospects. There have been rumors that the Rangers would also be interested in re-signing him after his contract ends this year which would scare me. Let’s not lock up another player into their mid-30’s please. We’ll see if that happens, but it’d make more sense as to why Jeff Gorton was willing to give up what he did if Staal’s not just a rental. For now, it’s up to the Carolina lifer to prove Gorton’s made the right move in his deadline debut. I’m just a part-time blogger, but I have my doubts.