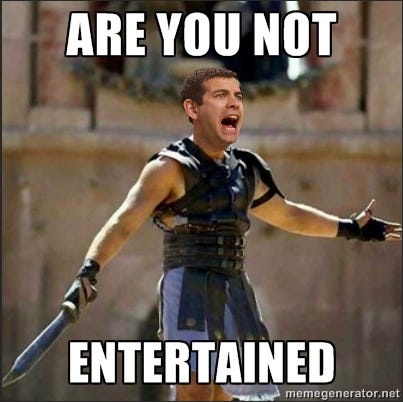 Are people having fun yet? Have you seen enough to start to believe in this team? After the rough first game post AS break, the Celtics have now won 3 of 4 (and barely lost to MN remember). Safe to say things have gotten back to how they were before the break and I’m not sure how you can’t love what you see.

Now I suppose this is where I’m told this game doesn’t really matter since Miami didn’t have Joe Johnson and Chris Bosh. That if the Heat had them, they kill they Celtics. Lol. Nevermind the fact that going into this game Miami was 3-1 without those two,  their only loss was to GS who isn’t terrible I hear. Let’s face reality shall we? In reality, the Celtics won the all important season series against MIA and both wins so far this season have come by double digits. Sorry to Heat fans (that makes me chuckle) but the Celtics are better than you. Period.

As things stand now, the Celtics (35-25) are 10 games over .500 for the first time since April 26, 2012. That’s crazy, but not all that surprising since thats right around the time when things started to get blown up. While for most of the NBA landscape this probably comes as a surprise, but not to you. Not to the loyal readers of this blog. We knew this was going to happen. We knew we had the talent and the coach and the system to have this sort of success. People just don’t want to listen. I’ll admit, it feels validating as fuck.

It also doesn’t hurt that there is now a little breathing room (2 games) from the Celtics and anyone else vying for that 3 seed. They’re doing it guys, they’re really doing it.

Or maybe my favorite play of his from the night, he does whatever it takes to make something happen. This one especially reminded me of basically the exact same thing he did in Denver. Winning plays.

Smart’s line was great: 15 points (5-9 shooting) 6 reb (3 offensive) 3 assists and was a bench high +12. He doesn’t do anything flashy, yet still makes an impact. That’s why I love him. His energy and effort level are off the charts, and he’s only getting better. Remember, he’s just 21.

– But let’s not forget what Evan Turner was able to do for this team. Without his second quarter, the Celts get blown out. Peak Evan Turner is such a solid basketball payer, that he basically did the impossible. He had me screaming for him to take every shot in that quarter. I couldn’t help it, he was fantastic.

To me, the reason Turner was able to have success simply comes down to where he scored from. 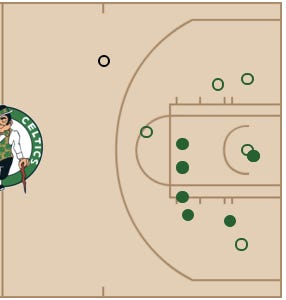 I’ve always said that if Turner can just get into that 15ft range, and doesn’t force the ball, he can be really effective. in fact, Turner shot 71% on unguarded shots yesterday. Miami had nobody who could keep him from his sweet spot, and he came through when the Celts needed someone to step up.

Here’s another fun fact. The Celtics are 19-1 when Turner ends a game higher than +3. So yeah, when he plays well, the Celtics play well, simple as that.

– How’s this for a pleasant surprise. Even with such an interior advantage in Whiteside, the Celtics actually won both the points in the paint battle (58-44) and the second chance points battle (22-16). Throw in the fastbreak edge (14-6) and you’d have no idea the Celts started this game half hungover. Just a great effort all around in an area where Miami probably had its biggest advantage.

– This shot by Jae Crowder. Holy smokes. #JustAGuy though…

– It’s a nice luxury to know that in a big spot, when you need your coach to come up with a bucket, Brad Stevens is who we get to turn to. This ATO play given the time and score was one of the biggest in the game. Probably more a breakdown on Miami than anything special by Boston, but still, great execution

– Jared Sullinger was probably the most relieved Celtic after the trade deadline passed and he’s certainly showing his appreciation. Another double double, his 12/12/4 was every bit as important as you think. Down the stretch of this game, Sully seemed to get every rebound which prevented Miami from multiple possessions, something the Celts have been known to struggle with. If you watch Sully play, he’s almost completely abandoned the three point shot (thank god) and he’s doing all of this in limited minutes. Just 24 for him yesterday.

– Don’t forget the defense! They finally help a team to under 100 points! They CAN do it! The second half of this game was a defensive clinic. The Heat shot just 35% in the half (1-8 from deep), and their 40 points were nine fewer than the first half. In fact, in the fourth quarter the Heat would score just 19 points on 35% shooting. The Celtics came out and took this game from Miami, and that’s what I love most.

– What, I told you I have a soft spot for bigs that run the floor.

– Rough night for Avery Bradley. His shot struggled, his passing was worse, he was slow to the 50/50 balls, and to top it all off he sprained his left ankle. In a weird way he was a team high +14, but it didn’t feel that way. Here’s to hoping his ankle isn’t anything serious and we can put this performance behind us.

– Ok, Ok, Isaiah struggled. I appreciated the chirps about how “see not a foundation player!” he was after judging him after one game, rather than you know, the 59 other’s he’s played. But I can be honest, had he scored 40 yesterday, that’s exactly what I would have done so I get it. He still had half his total in the fourth quarter so at least he showed up when it was time to put the game away. Chew on that. How’s that for a spinzone?

– It’s sort of crazy that Smart gets called so tightly. He’s not a rookie, yet it feels as though he is being officiated as one.

– Trying to stop Goran Dragic in that third quarter. The Celts did nothing to keep him out of the paint early, and once he made a few that opened up his outside shot. Admittedly, the Heat starting backcourt vastly outplayed ours.

– And really, all of the starters have had better games. But that’s the beauty of #depth. One night the starters score 83% of your points, the next, it’s the bench that saves the day.

– That entire first quarter. The Celtics were everything you don’t want your team to be. They were lazy, they took bad shots, they turned it over, and they played no defense. Some might say the early afternoon start had an impact, but I saw them score like 50 points against SAC in the first quarter of an afternoon game so I don’t buy it.

And with that, the focus turns to Utah. Big revenge game coming up on Monday, and I believe the Celts will be ready. As we creep closer and closer to the end of the season, playing well at home is going to be crucial. They’ve shown that their earlier struggles at home are now a thing of the past, and the Garden is becoming a tough place to play once again.

But please, tell me again how the Celts are a 7-8 seed at best and have no shot to win a round in the playoffs.