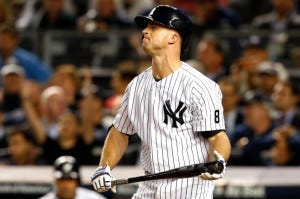 ”It’s gotten mostly better, but bone bruises can stay for a while so we’re just going to stagger him out,” Cashman said. ”I know he feels good, but we’re just going to take it slow because we can. The season is not upon us tomorrow. Just part of the safe route. Spring training is long enough.”

Gardner took part in defensive drills Thursday and advanced from dry swings over the past few weeks to hitting 25 balls apiece off a tee and soft toss. He will take a day off swinging the bat Friday.

This isn’t the way you want to start Spring Training for a team that will no doubt deal with injuries to an older lineup throughout the season. Many injuries will come and go but wrist problems have been pretty consistent for Brett and although Cashman is saying this is from the playoffs last year, it was an issue the whole 2nd half of the season. At 32 years old, Gardner has plenty of baseball ahead of him but a wrist injury that lingers for too long could make his very affordable contract, a burden. While we would rather see Gardner be totally healthy and return to his all-star form of the 1st half of 2015, we have other options that don’t look too bad.

With the trade of JR Murphy to the Twins we brought in Aaron Hicks to play the role of fourth outfielder. At 26 years old, Hicks hasn’t lit the world on fire but between Gardner’s wrist and Beltran’s age he should see regular playing time for the first time in his career. With that regularity in his day to day Hick’s should get the chance to show the talent that got him to the big leagues and made Cashman think he would be a good fit.

Besides Hicks, the Yankees announced that Refsnyder would see time at 3rd and in the outfield during camp. Ref was and outfielder before being moved to 2nd so the adjustment back should be easy. Ref is apparently a great athlete with an MLB ready bat but no position in the lineup was open for him (besides the glaring hole at 2nd last year) and there were questions about attitude. Hopefully the way he has handled the Castro trade has shown he is a team player and he will get the chance to show he’s a ball player that can contribute if needed.

Then there’s Aaron Judge, who is a 6’7″ 275 lb. monster that will be a key part of this franchise for a long time. After killing AA pitchers he got the call to AAA and struggled because of the adjustment. But with some more plate appearances under his belt in the early part of the season he should be ready for a call to The Bronx if injuries open up a spot on the roster.

A healthy Gardner is still the best option right now but if he isn’t ready to go everyday, we have plenty of guys that can plug in and deliver.