Holy shit was that perfect. The entire sequence from start to finish, magnifico!

From the “Oh My God, here he comes, here comes Kobe, this is my moment!” face.

To the “he’s reaching out his arms, he must want to hug me, better get myself ready to bring it in for the real thing” 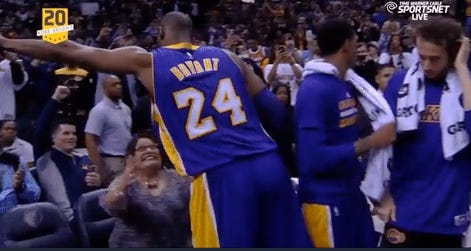 And then “oh shit, he probably just wants to hug me standing up, I better get on his level” 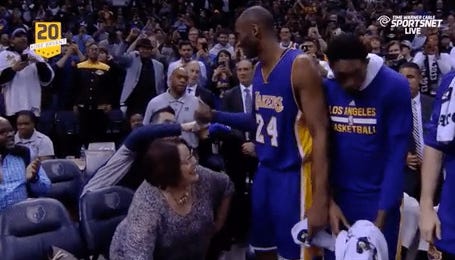 And the final “I’m just going to go for it because he’s weirdly sitting down even though I totally thought he wanted to hug me, Kobe hug me pleasseeeee”. 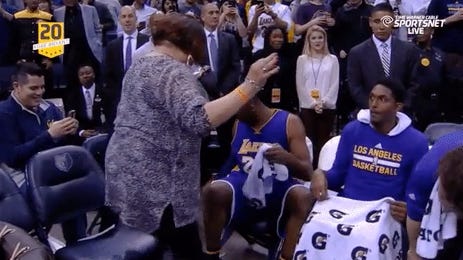 Perfection. This lady actually thought Kobe Bryant, one of the most famous people on planet earth was coming to give her a nice big hug. The delusion it takes to get to that point is remarkable. And the best part is she didn’t even look embarrassed after getting denied. It was almost like she was saying to herself “Oh that’s just my Kobe, he wasn’t in the mood this time, I’ll get him after the game, we’re tight like that”. Fucking Kobe fans, so weird.

The guys at the UC on Sunday night were the worst. I hate year long farewell tours for this exact reason. The Lakers SUCK, Kobe SUCKS, the team loses every single night. And you’re out there partying like they’re the best team in the world. Watching Kobe is depressing at this point. Stop following him around the country and demanding he jack threes that barely hit the rim. Just go out in peace. This is embarrassing for an all time great and exactly why I choose to forget the MJ Wizard years. Kobe leaving a weird taste in everyone’s mouth. He deserves better. Should have announced it with a month to go in the season.