Philly.com – It shows a young man, surrounded by a dozen other riders on an afternoon bus in Delaware County last week, shooting heroin into his arm.

Then he slips into a daze and collapses on the floor. Minutes later, police and paramedics bound aboard the bus, administer the drug Narcan, and revive the passenger…The video’s release also coincided with his department’s newest strategy on opioid abuse: arrests. 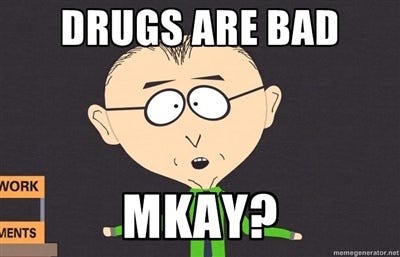 Now I know that I’m not in any position to be handing out life advice. There aren’t going to be any “Dear Jordie” posts any time soon. But I feel like in my 23 years of living, I’m pretty confident that I can hand out this quick tip without coming off like I think I know more than I actually do; don’t do heroin. Just don’t do it. Actually, don’t do any drugs at all. Weed isn’t necessarily a drug and the occasional use of coke on the weekend isn’t the worst. But outside of that, if somebody offers you a drug, just don’t do that shit. Or else you end up like this guy shooting heroin on a bus at 1 pm on a Tuesday, overdosing on a goddamn SEPTA, having to get revived by paramedics and then arrested for being a drug addict. I don’t know about any of you, but that doesn’t sound like a fun Tuesday afternoon to me. I’d much rather not briefly die on a bus that reeks of piss, vomit and failed dreams. I don’t want to tell you how to live your life but if you’re at the point in your addiction that you can’t even wait to get off the bus before you shoot up again, well chances are you’re not going to be living your life for much longer anyway.

So from now on if anybody ever offers you any heroin, just say that your good pal Jordie said he’d kick your ass if you ever doped. Friends helping friends. Oh, and one last thing.