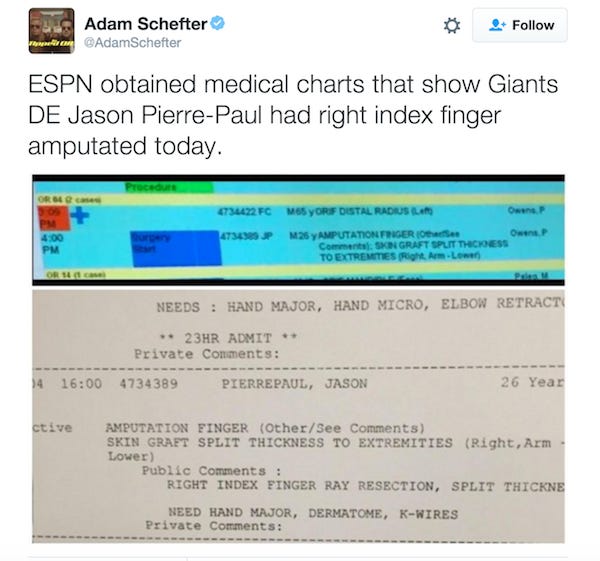 NY Daily News- Jason Pierre-Paul gave Adam Schefter and ESPN the finger in Florida state court Wednesday, filing a lawsuit that claims the sports network and its NFL reporter violated his privacy by posting medical records and photos of the Giants star’s mangled hand on Twitter. The lawsuit also claims Schefter violated Florida law by sharing Pierre-Paul’s medical charts with his nearly 4 million Twitter followers on July 8, days after the NFL player damaged the index finger on his right hand during a July 4 fireworks accident.

The lawsuit, which is seeking more than $15,000 in damages, says Schefter “improperly obtained” Pierre-Paul’s medical records from Jackson Memorial Hospital in Miami, where the defensive end was treated after the accident, and then cited them in a tweet that said Pierre-Paul’s finger had been amputated by doctors. “Schefter improperly obtained Plaintiff’s medical records from a hospital and then, out of a selfish desire to ‘break news,’ electronically blasted the records to approximately 4 million Twitter followers and made it available to anyone worldwide with Internet access,” the suit claims.

You had to figure that this was going to happen after only a matter of time. I mean even fake ass journalists like me immediately knew that tweet was probably against the law. That’s how you can gauge if something is especially wrong.  If Barstool and the Stoolies are immediately saying “uhhh, you shouldn’t be doing that”, it’s likely a bad idea.  And Schefter really can’t go with the Costanza “Was that wrong? Should I not have done that? I tell you, I gotta plead ignorance on this thing” defense.  If it fails the Barstool smell test, it stinks Adam.

That’s why being a blogger reacting to stories is so much better.  While Schefter is working whatever angle is necessary to get these records, we get to take the info and write jokes about it.  Sure he gets the little things like money, fame, and health insurance.  But we get…to have fun I guess?  And I don’t get the $15,000 price tag.  What the fuck is JPP going to buy with $15,000 that he couldn’t already get?  More fireworks?  Makes no damn sense, man.

And I have been staring at this Jon Heyman tweet for hours now and still can’t decide if he think that it’s a joke that JPP is suing Schefter or his actually tweet is just a joke.  It’s impossible to crack the thinking of any writer over 40 on Twitter.