Go ahead Shane! He got Twitter on Tuesday and is learning it like a pro. He’s only following 5 people- one being Jordans because he loves sneakers as much as he loves his family, 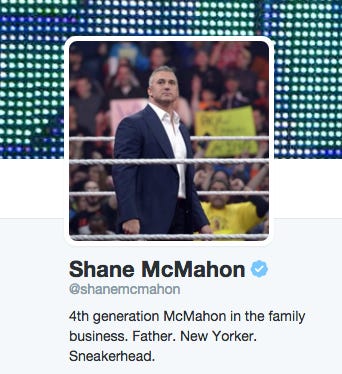 and he pulled off that video exactly how a middle aged man on Twitter for the first time would. I can’t wait to see how his Twitter game evolves.

And the fact that he’s training is great. Despite rumors that John Cena is going to step in for Shane because Shane is 46 years old, has three children, a shit ton of money, and hasn’t wrestled in a decade, it does appear that he’s serious about this. And he took to Twitter, which he just got, to attempt to show us his training. I love that he’s learning to use Twitter at the same time he’s training to step into Hell in a Cell with the Undertaker. If you aren’t rooting for Shane, you’re nuts.

This whole match is kinda sick because we know what Shane and Undertaker are capable of. We’ve seen Shane fall 50 feet from the Titantron on multiple occasions. We’ve seen Kurt Angle suplex him through glass panels. Is Shane going to go all out for this match? You gotta believe he will. He’s a showman’s showman. And most of all, he’s a McMahon. That family has it in their blood to go above and beyond. There is no line they won’t cross to put on a show.

I really need to book my hotel for Mania.