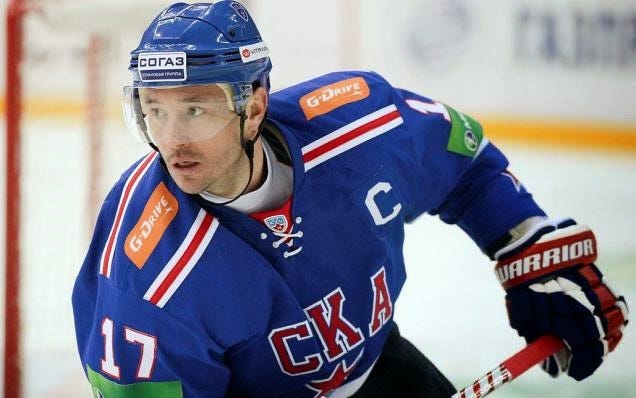 Ilya Kovalchuk has been the poster boy for lazy Russian hockey players for quite a few years now. After signing a 15-year $100 million contract with the New Jersey Devils (that was initially drawn up to be a 17-year $102 million) in 2010, Kovalchuk retired from the NHL in 2013 to go back home to play in Mother Russia. Pretty big cock sucker move to sign a contract for 15-years and then dip out after just 3 seasons. I know that Jeremy Roenick would agree with me there.

Well flash forward to 2016 and what do you now? Ilya Kovalchuk is still being a lazy Russian bastard who just laces up the skates to collect a paycheck. And with Kovalchuk’s SKA St. Petersburg in the KHL playoffs right now against Lokomotiv, it seems like even his own people are fed up with his shit at this point. Because after SKA lost the first game of the series, Kovalchuk (the captain of the team) was benched for game 2. Originally, most people just assumed this was going to be a one-game benching just to send a message to the cock sucker and the rest of the team to pick up their shit. But then this came out today.

via some Russian website – As the “SE”, Ilya Kovalchuk deprived of the captain’s stripes, and will not play in the third and fourth matches of the series with the “locomotive” that will take place on Thursday and Saturday in St. Petersburg. The further fate of the Russian national team striker SKA is still under question.

Stripped of his captaincy and will be sitting at least 3 of 4 of this playoff series. Why? Because he’s an asshole. That’s why. He’s the reason why it’s so hard to trust Russians in the NHL. It’s players like Kovalchuk and Radulov and Semin who give all the rest of them bad names. They’re all a bunch of shit heads who don’t care about winning, they just want their money so they can do whatever the hell it is that they do in desolate Russia. And the shitty thing is that there are Russians in this league that are incredibly fun to watch. Ovi, Kuznetsov, Datsyuk, Panarin, the list goes on. But it’s the Ilya Kovalchuk’s out there that ruin it for everybody else. It’s guys like that who make everybody want to root against Ovechkin to choke in the playoffs year after year. Because that’s the narrative that has been constructed for Russian players in the NHL. That they crush it in the regular season and then disappear when the playoffs start because they don’t have that North American heart and grit to get the job done. Is it fair? Maybe not. But that’s just what’s gonna happen when Ilya Kovalchuk is one of the main faces of Russian hockey.

As for Kovalchuk making a return to the NHL if his relationship with his Russian club is tarnished forever… don’t count on it. For a few reasons. 1) he stinks. He’s just not playing well enough right now for an NHL team to take a risk on him. He’s slow, his production has dropped off tremendously in 2016 and I doubt he’s been training hard enough. 2) He would need approval from all 30 NHL teams if he were to return this year because of the nature in which he retired from the league. Good luck with that happening. 3) He’d have to sit out of hockey for a full year if he wanted to return with just the Devil’s approval. He already sucks enough as is right now, just imagine how unproductive he’ll be after sitting out for an entire year.

So yeah, Ilya Kovalchuk. Once a cock sucker, always a cock sucker. Not that there’s anything wrong with that.