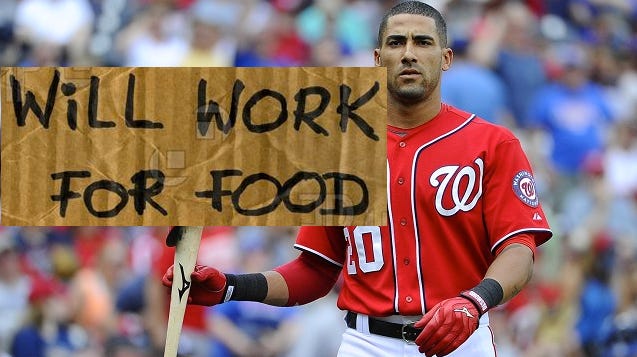 BI - Desmond is still lingering on the free agent market, and it appears his options are getting slim. Desmond had a disappointing 2015 that saw him hit .233 with 19 home runs, 62 RBIs, and just a .290 OBP — some of his worst numbers in his career. Furthermore, he struck out more frequently and saw his WAR drop from 3.8 in 2014 to 2.0. Nonetheless, Desmond, who had several productive seasons with the Nationals, opted to turn down the one-year, $15.8 million qualifying offer the Nationals extended to him. After making $11 million last season, Desmond thought he could get more as a free agent on the market. In 2013, Desmond also turned down a seven-year, $107 million extension from the Nationals. It was an interesting gamble for Desmond, and one he made perhaps thinking he could get other mega-offers from other teams when he hit free agency.

Quick question- do you think Ian Desmond regrets that whole “turning down over 107 million dollars of guaranteed money” thing right about now? I don’t feel bad for him 1) because he’s a multi-millionaire, and 2) he made the decision to gamble on himself and lost, but gollyyyyyyyy he went from having 107 million dollars staring him in the face to sitting at home during spring training at 30 years old. Quite the little difference if you ask me.

I’d like to make a rule of thumb real quick- if you’re an Ian Desmond, never turn down 100 million dollars. Not only if you ARE Ian Desmond, but also if you’re AN Ian Desmond. Everyone who reads this site is pretty much an Ian Desmond. Just a guy, not great, not terrible, just kinda a guy who every once in a while does something awesome and then rescinds to the mean. My new rule is if I’m ever offered 100 million dollars, I’m going to take it. Hindsight is always 20/20, which is why it’s important to make this rule and carve it into concrete now. Only guys like Zack Greinke are allowed to opt out of 3 years, 71 million dollars and then sign a bigger deal. Unfortunately for Ian Desmond, he is no Zack Greinke.

It sucks that he’s sitting at home, hoping a team is willing to sacrifice a first round draft pick in exchange for signing him. The fact teams trying to win right now don’t think he has more value than a first round pick, which in baseball is always a crapshoot, is downright depressing. But I guess they were paying attention to him dropping every popup, his yips, and his whole .233 average thing. He did get hot towards the end of the season, but it just wasn’t enough.

Unless they’re dicks, I don’t root against guys, and Ian Desmond was never a dick. So I obviously do hope he signs a nice 10 mil/year deal, has a good season, and then signs one last juicy contract. Would be a nice little feel good story about a guy who took a gamble on himself and lost big.

PS: Might be a good business idea to sell insurance policies on future contracts, a way for baseball players to hedge their bets against themselves. Is that a thing? Get Rosenhaus on the phone for me.