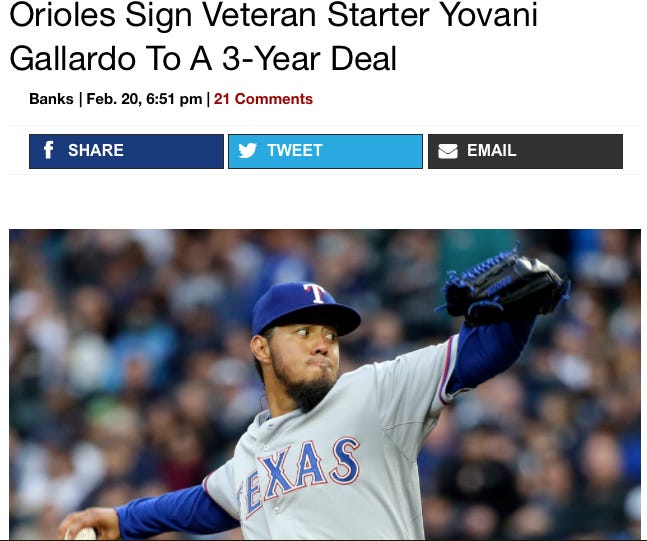 NOT SO FAST MY FRIENDS….

We all assume that once it’s announced a team signs a player, it’s a done deal. As Oriole fans know, that isn’t the truth. You always hear  “Player A has signed with Team A, pending physical”, those physicals are usually nothing to worry about, unless you are a player attempting to sign with the Baltimore Orioles. We all remember the Grant Balfour failed physical that actually benefited the Orioles a few years back, we gave them lots of shit for it, but it was clearly better that he failed that physical. And how does Nolan Reimold pass a physical every year, but no one else can?

The Orioles were all ready to officially announce the signing of Gallardo to a 3-year, $35 million deal at a press confrence, but something was spotted on the MRI that made the Orioles put the deal on hold for the time being. It is a bit concerning that the Orioles found something wrong with the shoulder of a guy who has started at least 30 games every year since 2009. However, it’s not like Gallardo has been overworked since he’s come into the league, he’s had a pretty normal work load since he came into the league, averaging a little over 190 innings a year since 2009.

This deal isn’t dead…yet, but there is work to be done. If the O’s weren’t giving up the 14th overall pick, I’m not sure that this would be a problem. They would be more likely to look past it, and cross that bridge when they get there. The draft pick is why they are so cautious about this, and obviously I have no problem with the O’s and their doctors doing their due diligence on a guy who they are giving away a top pick for. You have to check and make sure everything in the car works before you buy it, right? That is exactly what the Orioles are doing in this situation here. If they don’t sign him due to this, that’s fine, there’s no need to throw away a pick on a busted shoulder. But if they signed him and whatever showed up on the MRI was a big issue, everyone would flip.

The Orioles signed Dexter Fowler last night to patrol right field, so this team is obviously going for it and trying to win now, forfeiting their top 2 picks for Gallardo and Fowler. MASN’s Roch Kubatko reported that we won’t know the outcome of the MRI today, so this could take a few days.

The O’s pulling out of deals isn’t a new thing either. Albert Belle didn’t fail his physical, but that bad hip could be what caused Uncle Pete to be so cautious when it comes to injuries. Aaron Sele had a 4-year deal in place with the Birds back after the 1999 season, but the Orioles doctors red flagged his shoulder during his physical, and dropped the year total from 4 to 2 in the deal, saying he had less than 500 innings left in his shoulder. Sele signed with the Mariners and ended up pitching another 550 innings. Others like Jair Jurrjens and Jeromy Burnitz had trouble with their physicals, I’d rather the club be safe than sorry in these cases.

Still hoping that Gallardo’s shoulder turns out okay, and we can see him in Orange and Black for the next 3 seasons.