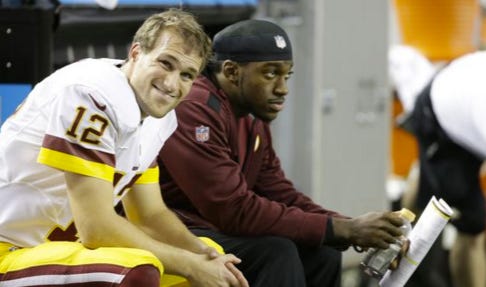 NFL - Robert Griffin III’s time with the Washington Redskins is just about up.

If there were any questions (there weren’t) about whether the team would change gears and keep RGIII, president Bruce Allen shut them down Tuesday during an interview with The Mighty 1090 in San Diego. “Well, no. I see Robert getting an opportunity with another team,” Allen said when asked if RGIII would be back. “We’ve heard from some teams that are interested. I think he’s going to have a choice of a couple teams that will let him excel in the future.”

“From the very beginning Robert has handled himself as a professional,” Allen said. “From when we first drafted him all the way through he’s been a good teammate and a good guy. I know some people on the outside always like to be critical, but his teammates like him, his coaches like him, he does have some special talents and we wish him well.” The Redskins have until March 9 to cut RGIII.

We’ve known it, we’ve thought about it, and now it’s confirmed. Robert Griffin III, the man brought in to resurrect the Redskins, will be cut, and cut soon. It is so bittersweet to see him go- Redskins fans will never forget his illustrious 2012 rookie season where he was running like a mad man, zipping the ball downfield with ease, and not just living up to, but exceeding all expectations. Took the Skins to the playoffs, only for his knee to fall apart like a Jenga tower. He never fully recovered, never got his confidence back, and then was benched all of last season in favor of Kirk Cousins.

If you’re a Redskins fan and don’t want to see RG3 succeeded you’re just an asshole. The kid works hard, means well, is great in the community, and has a ton of talent. It did not work here for him, but it doesn’t mean his career is over. As long as he isn’t in the NFC East or playing the Redskins, I’ll root for him. I want to see him do well. I won’t get mad if he bounces back and becomes a hall of famer, because he sure as shit isn’t going to do that in DC.

Now the Skins need to get Kirk under contract so we can officially move on from the RG3 era and start the King Kirk the GOAT era in DC.