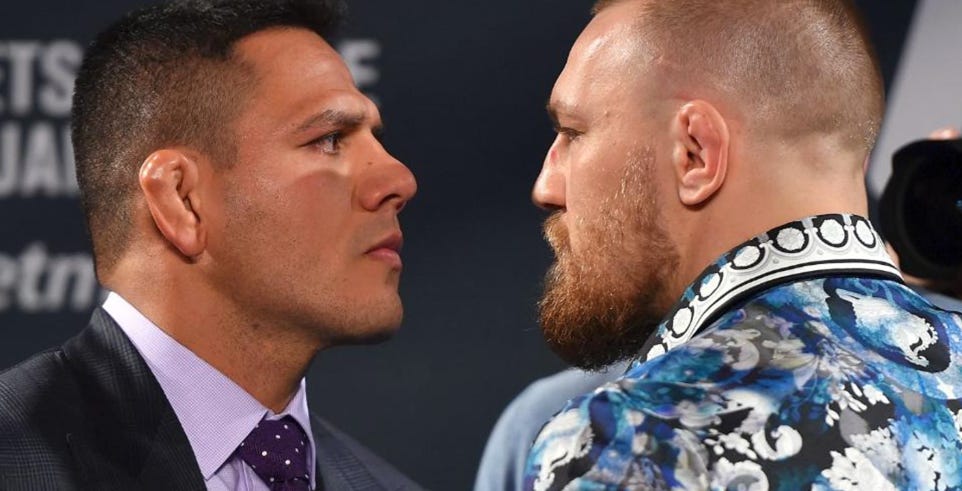 (Source) Another UFC superstar has suffered a significant injury. This one comes just 13 days before the main event fight from Las Vegas as lightweight champion Rafael dos Anjos has reportedly suffered a foot injury and will be forced out of his fight against featherweight champion Conor McGregor on March 5, according to Brazilian news outlet Globo.

It is the second time in three fights that McGregor’s opponent has suffered an injury in training, as former featherweight champ Jose Aldo was forced to pull out of last summer’s scheduled title fight. He eventually lost his belt to McGregor in November.

The UFC is yet to confirm dos Anjos’ injury and no announcement regarding the main event has been made. Women’s bantamweight champion Holly Holm and Miesha Tate are currently the co-main event for UFC 196.

As a new MMA guy (no I will not be a hardo wearing ill fitting Affliction shirts and white sunglasses while talking about arm bars, I just enjoy the sport and like watching the fights) this is devastating news. Conor McGregor is an absolute force right now, a wave you can’t get off, so for this fight to not happen just 13 days beforehand is brutal. I assume they’ll try to find a replacement right? UFC can’t have McGregor just not on the card anymore. What sucks is from everything I gathered this was going to be a great fight. The Vegas odds had both fighters under -200/+200 respectively. Good news is we’ll probably get an all time Conor McGregor rant out of this one, just watching his twitter feed right now, waiting for the fireworks to begin. If we can’t watch him beat people up, at least we can watch him go insane with his words.

MMA stoolies, they can find a replacement right? I won’t ever pretend to talk about shit I don’t know, I sure hope they can.