Tonight’s Nashville vs Montreal game went to 3-on-3 overtime and in that overtime, Predators forward Craig Smith had the game winning goal gift wrapped and put on a platter for him. But as you saw in the video above, he somehow managed to miss what was one of the easiest tap-ins in hockey history. In case you still can’t figure out how he managed to miss the back of the net here, take a closer look.

Silky smooth hands on that one and just like that, the nightmare was avoided. Preds get the win and Craig Smith gets himself off the hook. Until the next time, that is. Because Craig Smith is beginning to make a habit of this.

Last thing before we wrap up here because this will be very interesting to follow. 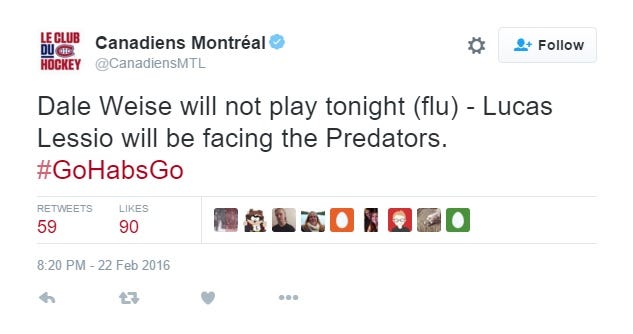 Dale Weise is going to be traded at some point over the next 6 days. Now I don’t think that the Montreal Canadiens would lie about him having the flu just to hide a trade. But all I’m saying is that I wouldn’t be too surprised to wake up at 3 this morning to Bob McKenzie breaking a Dale Weise trade. Just something to keep in mind.