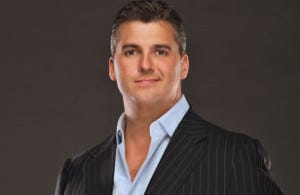 We’ve all been waiting for this day to come since May 4th, 2009 and our prayers have been answered… SHANE MCMAHON IS BACK!!! If you grew up watching the Attitude Era of WWF you loved Shane. He was the son of a millionaire who got to be a pro-wrestler and he pulled off the best stunts in the company. He jumped off the Titantron, got thrown through glass and jumped through tables like he was Mick Foley, not some rich kid from Greenwich, CT.

For almost 7 long years fans have been asking when Shane would come back. In recent years, with all the questionable characters on WWE, fans begged for his return. From 2010 to 2013 he was CEO of an On Demand company in China. Once he stepped down, the possibility of a return became real. But Shane never showed up and there were no real signs of him coming back… Until today.

This morning a Stoolie reached out and said he had a source at WWE who told him Shane was coming back tonight. With the WWE giving out an award in the name of his grandfather it seemed like a possibility. Then Brandon Stroud, who is pretty tied in, tweeted that he just got a spoiler so good he would “jump off the Titantron” but the tweet was quickly deleted. I reached out to Pete Gas of The Mean Street Posse. Pete is a Stoolie so I thought there was a chance, but Pete said he knows nothing and doesn’t see it being real. This is when I should’ve realized that the bonds formed on the mean streets of Greenwich shouldn’t be messed with.

From there I reached out to more people and found out that the social media team was told to be on “high alert” tonight and that the first segment had no script. When the WWE doesn’t have a script it means that something big is happening, like a cash-in or a surprise return that hasn’t been leaked. None of the dirt sheets across the web had this but I just knew Shane was coming back…

And now here he is!

Not only is he back but he is back to wrestle on the grandest stage of them all Wrestlemania 32 in Dallas, against THE UNDERTAKER IN A HELL IN A CELL!!!!