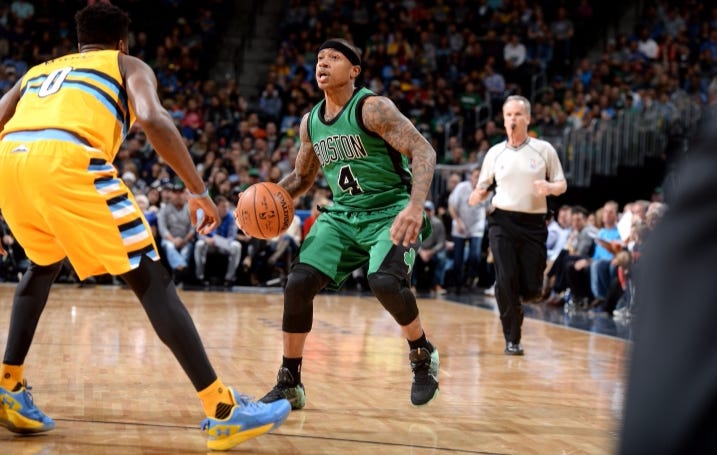 – Terrible food options. I don’t know if I’ve become spoiled since the Garden redid their food, but woof. $7.75 for one slice of small pizza? My Jewish ancestors cried for me when I paid it. Did you also know they keep the cap to your drink? Weird stuff.

– I will say this, the Pepsi Center demolishes the Garden when it comes to your seat. Whether you are in the balcony or the lower bowl, you get nice plush leather seats. Compare that to what we deal with at the Garden and it was like a vacation for your ass.

– They have their own DJ named DJ Bedz who I guess has been doing it for 13 years. He spins the 1s and 2s while the Nuggets warm up and basically all game which was annoying. I know it’s the low hanging fruit but DJ Bedz put me to sleep (I’ll see myself out)

In other unrelated news, I’m definitely in Denver. I can smell it in the air – even at an NBA game.

Now, the game. This was a much needed result after the debacle in Utah. Granted the Nuggets are a pretty bad team, but the 121 points the Celts scored were their second highest total in a non-OT game this season (128 vs SAC). Historically Denver has been a tough place for the Celtics to play (sound familiar?) and it’s crazy when you look at how improved they are against Western Conference teams on the road. If this isn’t encouraging, I dunno what is

Aight let’s get to it

– After struggling on the defensive end of the court for pretty much the entire month of February, one thing stood out to me right away. The Celtics communication on defense was so much better than it had been in Utah. They were switching multiple times a possession without fail. They did a great job of defending without fouling in the first quarter (just 3) and the Celts held Utah to just 17 points on 28% shooting. This defense created easy offense, and the Celts poured in a 35 point quarter and 18 point lead early.

– Biggest surprise of the night for me was the performance by Avery Bradley. On Friday, it’s no secret he struggled. His shot was off, his passing horrendous, and as a result the team stalled. After seeing him limp off the court in Utah there was serious doubt if he would even play on Sunday. What we got was a vintage Avery performance. Efficient shooting (8-15), a handful of threes, resulted in a solid 20 point performance that the Celts desperately needed from their longest tenured player.

– Overall yesterday was a bounce back effort in all aspects. The Celtics shooting splits were solid: 48%/31%/85%. Offensively they did a good job of not settling, and remained aggressive. In fact, they demolished the Nuggets in the paint, a 60-44 advantage. Throw in their 48-36 win on the glass, and this result shouldn’t be that surprising. This is the exact formula that has resulted in positive outcomes. Defend well, win the battle inside, and protect the glass.

– I simply couldn’t go much further without talking about Isaiah. What a fucking stud. Thomas made his presence felt right from the jump, and it was clear pretty early that Garry Harris Jr. had no shot whatsoever of staying in front of him. When Isaiah plays like this, I’m not sure anyone can slow him down defensively.

Isaiah Thomas with the teardrop layup high off the glass… AND 1! pic.twitter.com/4wW5HxY9L6

In fact, when the Celtics desperately needed their best player, he showed up. With around 7:30 left in the third quarter, the lead cut down to 7 (from 26), Isaiah got the ball off a miss and converted on an unstoppable floater for a bucket and a foul. I love this floater. LOVE. I said it when it happened and I’ll say it again. If Thomas can consistently have this shot in his arsenal, he’s truly unguardable.

– Huge tip of the cap to Jay King (@ByJayKing ), Adam Himmelsbach (@AdamHimmelsbach ), Gary Washburn (@GwashburnGlobe), Chris Forsberg (@ESPNForsberg), Marc D’Amico (@Marc_DAmico), and Amanda Pflugrad (@Amanda_Pflugrad). Where they were stationed was close to my section and jesus man I dunno how they do it. It’s basically impossible for me to tweet when I’m in the arena and these dudes were grindin. Make sure you read their stuff.

– The nice part about this win, was it was a complete team effort. First unit played great at times, then the bench held serve for moments. When the second unit shows up, it makes things so much easier. The play of both Smart and Turner was a nice rebound from Friday, when both struggled.

First, I’m almost running out of ways to fall in love with what Marcus Smart does for this team. His versatility allows for so many things. His willingness to defend bigger players, and do it effectively, is such a weapon. We saw him take Porzingis out of the game, and yesterday his ability to switch onto Danilo Gallinari made an impact. He got a little trigger happy from deep, as he tends to do once he makes a few, but he makes winning plays over and over again.

Whether its taking a charge, keeping a rebound alive, or coming up with a steal (he had 4), I think the best way to describe Marcus is you know when he’s on the court. You know how Jeff Green always seemed to disappear during a game? Well this is what the exact opposite of that looks like.

Now, it’s time to give Turner credit. He carried the second unit, and he did it the right way. Sure maybe he turned it over four times, but he more than made up for it.

Evan Turner shows off his handles and his dance moves en route to the hoop: pic.twitter.com/VEtLW6LRm4

Those are pretty legit moves. With Turner, if he can continue to have this sort of offensive attack, get to his midrange spot he can be a really impactful player. It’s no surprise that in the games in which he plays well, the Celtics play well.

– I see you Sully. You think he’s happy he didn’t get traded? After getting abused by Utah’s frontline, this was a nice bounce back effort from him. If you remember, when the Celtics played the Nuggets in Boston, they had a good amount of success with the pick and pop with Olynyk. We saw that right away with Isaiah/Sully in the first quarter with similar results. I’ll take 16/11/5 with good percentages any day of the week.

– Early candidate for play of the year. If someone asks you to sum up how the Celtics are winning games this year, show them this. Sums everything up perfectly (MARCUS!)

C’s showing incredible hustle and determination! Check it out: pic.twitter.com/325UftYKaS

– Fouls, just so many fouls. In the bonus early in three of the four quarters, it’s just getting ridiculous. There’s being aggressive, and then there’s being stupid.

– Marcus Smart’s acting. Did he deserve that tech? Probably not. But everyone knows you weren’t initially “pointing to your teammate”. Again, bullshit tech, but come on now.

– While they made up for it, the Celtics were plagued yet again by another slow start to open the third. Their offense stalled, everyone basically stood around, and they were simply flat. A 10-3 start to the quarter will do that to ya.

– Guess we’re still going to have to wait to see Jordan Mickey get real minutes. I just want to find out if he’s Fab Melo or not, is that OK??

– I suppose letting a 26 point lead get down to 5 qualifies. The Celtics had an opportunity to put this game away (you’d think that 26 would be enough but lol) and instead their fouling kept Denver in it. Their 12 FTs in the second kept them within striking distance heading into the half, and their quick start in the third made it a dogfight. Credit the Celtics mental toughness for responding but shit man.

– While I like them, I can understand the outcry for the traditional road uniforms and not the ones we got yesterday. Seems like the Celts haven’t worn them in forever, and they are absolute fire.

At the end of the day, the Celts continue life for one more day as the 3 seed and just as I predicted on Saturday, responded well. Things get no easier as they are right back at it tonight in Minnesota, who is rested. The Celts blew them out just before Christmas at the Garden, but I’m not convinced this is going to be that same cakewalk. For the time being rejoice, because things appear to be back on track.