The Nationals may not be dealing with preseason story lines like the Yankees‘ domestic violence acquisitions or the Red Sox‘s 400 pound 3rd baseman but that isn’t to say that they’ve got a boring spring training coming up. With questions about sustaining success, the team’s revamped ‘pen, Pap, and new manager Dusty Baker abound, I made a lineup of the 9 biggest. Let me know what you think on twitter Follow @SAlaskaBarstool

1) Batting leadoff, which Scherzer and Strasburg are we getting? Max Scherzer was my favorite for NL Cy Young at the All Star Break but the wheels fell off into a 3.72 2nd half ERA. That’s right, as bad as Scherzer was at points in the 2nd half, he was still pretty good and his 11.7 K/9 after the break paced the National League. Scherzer’s dominant end to the season (2.49 ERA in September and October, capped off with a 17 K no-no) makes me confident that we’ll get the extremely elite Scherzer rather than the just ‘good’ Scherzer. Stephen Strasburg is entering his walk year and, while his full season results for 2015 aren’t very ace-like, he dominated after returning from the disabled list in August. In his final 66 innings, he put up video game stats of a 1.90 ERA, with 92 strikeouts and just 8 walks. Strasburg won’t be that good over the course of the full season but I’m confident that 2016 is the year he becomes a full-time ace and the Nationals should do everything in their power to lock him up before he breaks out. 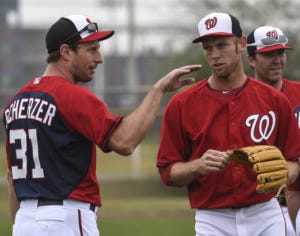 2) Bryce Harper’s play after his historic 2015 is the next big storyline and its possible that he plays even better. Harper is a generational talent and I really wouldn’t put anything out of the realm of production possibilities. Harper definitely has the talent to cut down on strikeouts and, if he does, that .330 average could realistically look like a .350. This is 2016’s MVP and I would support the Lerners spending 500 million on a 12 or 13 year deal for the sexy stud.

3) Revamped ‘pen: The Nationals pen really let them down towards the end of the season but, while the team didn’t make a ton of major moves over the course of the offseason, Mike Rizzo really renovated the ‘pen. Aaron Laffey, Nick Masset, Yusmeiro Petit, Shawn Kelley, Olly Perez, Sean Burnett, Burke Badenhop, and Trevor Gott were all added to the team’s spring training roster. Shawn Kelley (2.45 ERA and great peripherals), Yusmeiro Petit (A quality emergency starter and middle reliever), Oliver Perez (held lefties to a .194/.242/.290), and 23 year old Trevor Gott (3.02 ERA) are all virtual locks for the Major League roster. While I am not as high on Gott as most, there is no way that this pen is as bad as it was at times last year (unless Dusty Baker gets in the way but more on that later). 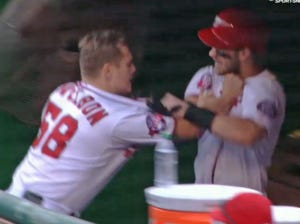 4) How could we have a storylines blog without Jonathan Papelbon. I never thought that Jonathan Papelbon would be traded this offseason and its starting to look like I’ll be right. Papelbon is a loose canon and an asshole but he can still pitch (his ERA was above 3.00 just once in his career) and if the Nationals can find a way to assuage his ego, he will be a pretty skilled relief pitcher. Harper and Pap are saying all of the right things but even if they still don’t get along, this isn’t the end of the world. If Papelbon continues to produce as he has in the past, this problem will be pretty minor but, if his skill starts to slip then expect a lot more chatter about how much of a pain this guy can be.