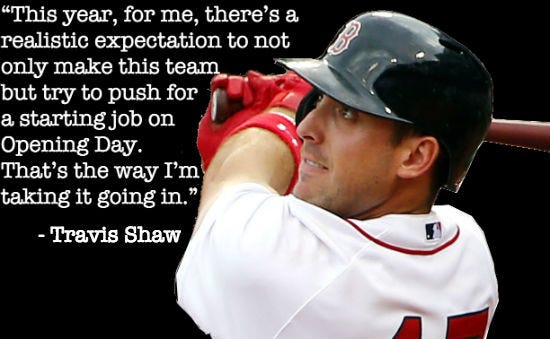 Jared wrote about Travis Shaw’s attitude coming into spring training and his desire to win the first base job earlier this week. Right off the bat (get it?), I agreed with everything he said. It’s a great attitude for an impossible situation and if things break poorly for Hanley, it means that Shaw will be ready to step into the lineup.

The blog also reminded me of Jared and Pete’s debate on Section 10 a couple weeks back about how long the Sox should give Hanley at first base this season. If we’re being honest, the whole discussion was a little depressing:

The question posed either directly or implicitly in both the blog and the podcast, is how long does Hanley get to prove himself as a Major League first basemen?

I know he was hurt last year. I know that they were contact injuries. Regardless, he played 38 of 48 possible games from July 1st until the time his season ended on August 26th and in that time he put up a .193/.223/.333 slash line while striking out once every 4.4 at-bats. In that same timeframe, Travis Shaw played in 24 games: he hit .345/.385/.655 with seven homers to start his reign as, to borrow a phrase, the Mayor of Ding Dong City.

Am I saying that Travis Shaw can sustain those numbers? Of course not. Do I think Shaw should be handed the first base job? Also no. I understand that the Sox are basically trying to hide Hanley somewhere in the field this season until he can become a full-time DH.

Beyond the financial obligations weighing on that decision, that makes sense to me baseball-wise. Hanley is an up-and-down player season-to-season, but in a league where the designated hitter is increasingly a versatile bench player or a regular who needs a day off from the field, having a hitter like Hanley only worrying about crushing baseballs from 2017 to 2019 is a potentially huge advantage.

But I expect the Red Sox to compete for a World Series title in 2016. They have a top-2 pitcher in the division as their ace, a top-3 bullpen in baseball, two of the brightest young stars in the game in Mookie and Xander, and the old guard of Pedroia and Ortiz back and healthy. The Sox can’t let a positionless malcontent screw that up because he might be good in the next few years. Especially when they have a player in Travis Shaw who might be the better option from the jump.

Shaw played 65 games at the MLB level last season, the first 65 of his career. Let’s play a game with that: One of these sets of numbers are Travis Shaw’s 2014; the other four are the first 65 games in a single season (i.e.: no 45 game call-up combined with the start of a new season) of Freddie Freeman, Adrian Gonzalez, Anthony Rizzo, Mark Teixeira and Joey Votto’s careers:

Got all your guesses lined up? Think you know which players have combined for 16 all-star nods, an MVP and 12 top-10 MVP finishes including three times in the top-three?

Needless to say, he fits in with that group’s performance in this 65-game sample size quite well. The group line was .272/.337/.460 and Shaw’s was .274/.331/.491. That said, I’m not really so interested in judging his 2015 performance. We know he was great when he got a shot last season. But now that we have a bit of context in the form of some comparisons that pretty closely match how he started his career, we can try to look at what Shaw might do going forward. Here’s how those those other 5 fared in their follow up season standardized to 650 plate appearances:

Each member of that sample group outside of Rizzo improved his OPS in the first year after their initial 65-game season. Even in Rizzo’s regression, he was on a nearly 22 home run per 650 plate appearances pace to go along with nearly 40 more extra base hits. On the other end of the spectrum, both Votto and Teixeira put up All Star, if not MVP, caliber numbers and both of them did, in fact, earn a handful of MVP votes.

Looking at Shaw’s 2015 performance and how similar players have trended as they get more playing time in year-two, it’s easy to say that the Sox should plug him in at first immediately, and it’s a reasonable enough case to make given the circumstances. If rather than projecting forward we look back to before last year, however, there’s reason to be skeptical that Shaw will follow in the footsteps of Freeman, Votto, Rizzo, Gonzalez and Teixeira.

Simplest of all, Shaw was older last year than each member of the comparison group was in their first 65-game Major League season. True enough, Shaw was still only 25, but Votto at 24 was the only guy within a year of that. Moreover, Freeman, Votto, Rizzo, Gonzalez and Teixeira all had far more impressive numbers in the minors and during brief call-ups the two years prior to their initial 65-game season (again, standardized to 650 plate appearances):

Shaw’s .251/.348/.436 line pales in comparison to the average .299/.376/.512 of the other five players. In fact, the only categories in which Shaw did not post the worst numbers of the group were home runs (ahead of Freeman), walks (led the group), and strikeouts (Rizzo was almost 15% worse). In short, there was a reason Shaw wasn’t on any prospect radar going into 2015 and why he didn’t get any real shot at the MLB level until his age-25 season.

That doesn’t mean that he just happened to have a lucky 65 games in 2015. 248 plate appearances isn’t a ton, but it’s also not nothing and he performed extremely well during those chances. It does mean, however, there’s a likelihood that even if he doesn’t regress, he won’t match the same trajectory as the other five players. Baseball-reference and FanGraphs each publish player projections before the season and each of them predict just that for Shaw:

Those numbers are a small step back, but they aren’t anything to sneeze at either. Put it this way: if I told you Hanley would hit 25 homers with another 30 doubles and post an OPS of .778 while playing serviceable defense at first base, would you take it? Because that’s what we could reasonably expect out of a full season of Travis Shaw.

One thing, though: from what we’ve seen so far, Travis Shaw plays a more than serviceable first base. Among first basemen who played at least 450 innings in 2015 (Shaw was at first for 456.1 innings), Shaw’s Ultimate Zone Rating* per 150 Games (UZR/150), led baseball at 12.7; the only other player in double figures was Brandon belt at 10.7 while third-place finisher Mitch Moreland managed a figure just over half of Shaw’s at 6.4.

*Per FanGraphs: “UZR puts a run value to defense, attempting to quantify how many runs a player saved or gave up through their fielding prowess (or lack thereof).”*

The only better seasons at first base in terms of UZR/150 in the last five years are two players in our comparison group: Adrian Gonzalez and Mark Teixeira who have combined for five Gold Gloves (whatever those are worth to you). Also of note, Hanley’s highest single-season UZR/150 at one position was 1.1…at shortstop…in 2008. Even if Hanley can make himself into a non-disastrous first basemen, he’s never been a particularly good fielder despite all his tools.

With all these facts weighing on Red Sox management, the question is where the inflection point is for the Hanley/Shaw flip. Jared is right in his blog: even if Shaw looks like Teddy fucking Ballgame during Spring Training he probably won’t be starting on opening day.

I understand the desire to make Hanley work. Hell, I hope he works. But the reality is that he’s 32-years-old, learning a new position and coming off his worst season ever. Travis Shaw had a 65-game campaign that fits in nicely with some of the best first basemen in the league as they started their careers and makes a strong case as the best first baseman on a team that has an expectation to win the World Series.