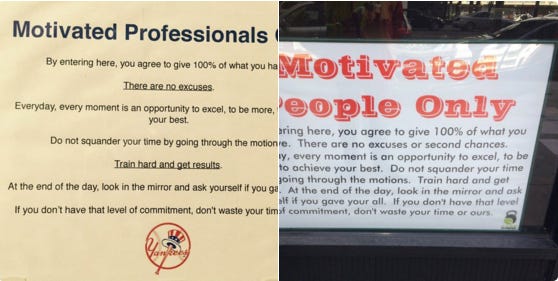 I’m accused of being a homer a lot, and I am, but this is a terrible look. Being a Yankee fan if great because of the winning but at the same time is tough because everyone hates you. The world says you buy your teams and you don’t have real fans, but you can throw 27 championships in their face. But is someone says “Your team steals their motivation from a sign in a crossfit gym” I have no comeback.

To me there are 5 sports groups that get a ton of hate. Yankees fans, Patriots fans, Laker fans, Cowboys fans and crossfit people. The first 4 have championships that they can wave in peoples faces, even though I don’t believe real Laker fans exist since no one is from LA, but crossfit people should be hated. No one from the other groups tells you that you should join up with them because we don’t want outsiders to come in. Crossfit people though, never shut the fuck up about how great it is and how you should try it or just how much better off they are than you, because they haven’t eaten half a funfetti cake in the last 2 nights. It’s a cult.

Tell me my team is full of guys on steroids, great! Tell me they’re too old and overpaid, don’t care! Tell me they’ve priced out the common fan killed the resale market, it was a smart business move. But tell me that they are stealing quotes from signs in crossfit gym windows and I am a ship without a sail.

This honestly may be the worst thing the Yankees have ever done.