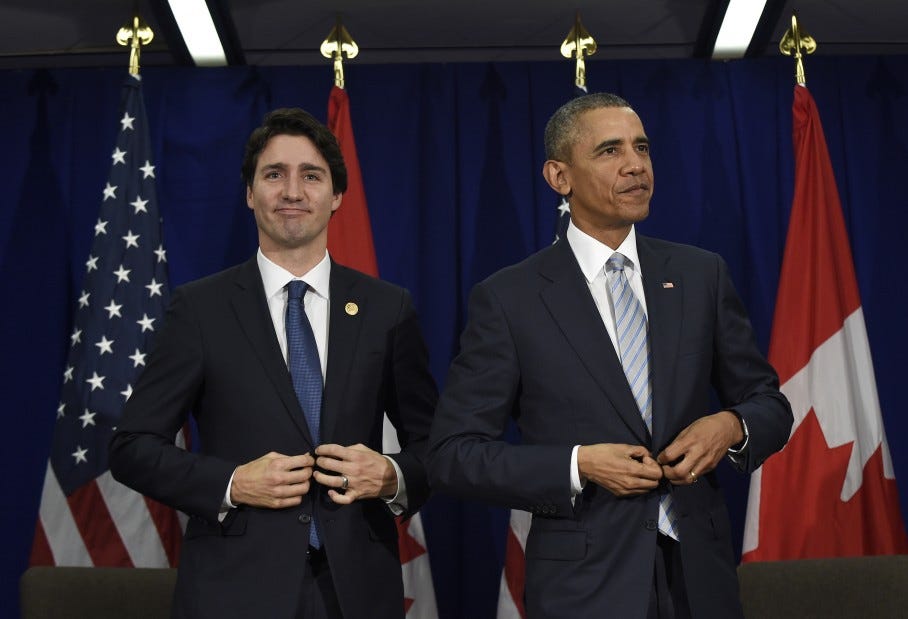 The 2015 Stanley Cup champion Chicago Blackhawks were honored (again) at the White House yesterday. Chief wrote up a recap blog on that event right here. And while Barry O was up there yammering on about god knows what, he mentioned how the Chicago Blackhawks used to suck major dick before he became President. And then he said he’d like a day with the Cup because he has “a steak dinner with Canada coming up, so we may just leave it in the middle of the room”. Pretty solid chip from the Commander in Chief, especially considering no Canadian team has won the Stanley Cup since ’93. But I guess the fancy new hot Canadian Prime Minister Justin Trudeau wasn’t going to take the chirp lightly and fired back one of his own. 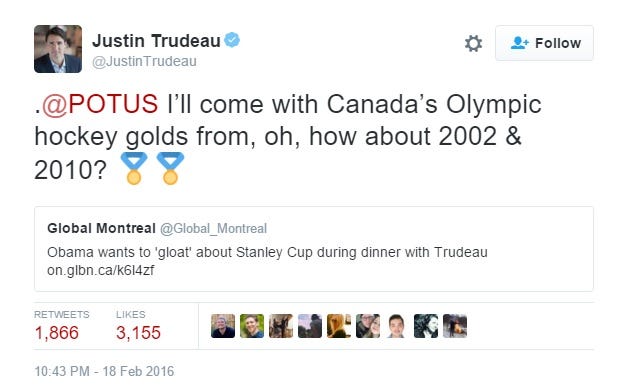 That handsome son of a fucking bitch. As you should remember, the 2002 and 2010 gold medals are significant here because that’s when those maple syrup guzzling, over-polite bastards beat the USA in the finals. You know, when this shit happened?

One of the worst moments in my life. Actually, the only moment in my life that was worse was just a few months later when Patrick Kane scored a similar goal in overtime to win that first Stanley Cup for the Blackhawks over the Flyers. But yeah, here comes that jabroni Justin Trudeau just tea-bagging hockey fans all across America. Well I’ll be damned if we let this happen with zero repercussions. So I think the only thing that has to happen now is that Barack Obama and Justin Trudeau need to settle this with a good old fashion hockey fight. Let’s go to the tale of the tape. 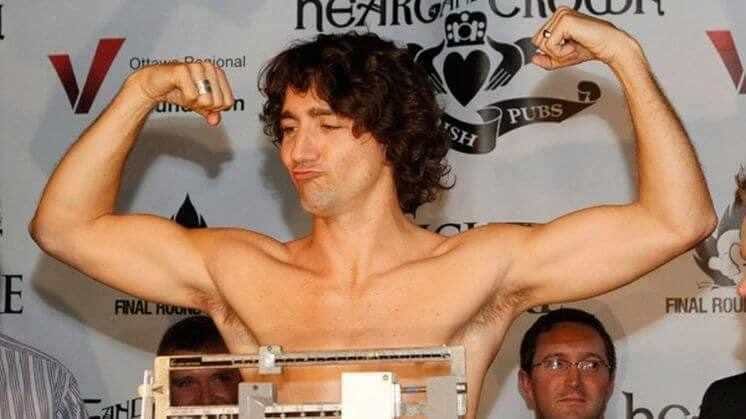 Okay so maybe Trudeau has some boxing experience. And maybe a hockey fight is more to his advantage as he probably grew up on the ice being a Canadian. But Obama is from the streets of Chicago. He’s seen some shit in his life and when push comes to shove, he can probably throw some hands. It’s either that or we go to actual war with Canada and I still have a little love for those moose-riding bastards up North and I really wouldn’t want to see that happen. So let’s set up a hockey fight between Obama and Trudeau. We can make it a charity event. And all proceeds will go toward raising the Canadian dollar because come on, guys, your dollar fucking stinks right now. It’s a little embarrassing. You’re like cold Mexico at this point.

Sidenote: Nothing I hate more than when people bring up the argument that “oh but half the players on every roster are Canadian, blah blah blah, yada yada yada”. Yeah, I get it. There are a ton of Canadians on every American Stanley Cup winning team. But guess what, bitches? They decided to come to America. They decided to get paid in American money. They live here, they work here, they are ours now. If you don’t want your top talent leaving the nation, well then maybe go make a league of your own. Because at the rate the Canadian NHL teams are going right now, we may reach 30+ years before the Stanley Cup makes its way back up North.