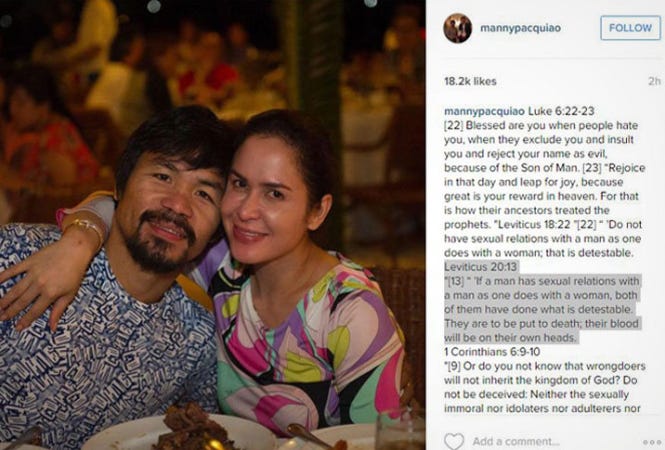 Well we talk about people being spineless these days, always succumbing to the pressure of public opinion, and when we talk about those people I’m pretty sure we are not talking about Manny Pacquiao. All time double down here. Whole world against you, whole world thinks you’re a homophobe moron for calling gay people subhuman? Well just throw up a nice family picture displaying a normal hetero relationship and a quick bible verse saying all gay people should be murdered. That’s how you push those chips into the middle, Manny. And really when it comes down to it you can’t be mad at Manny right? It’s just a quote? Are we not allowed to quote things anymore? It’s not like Manny said death to gays, the bible did. Manny just thinks it and would totally act upon those thoughts and murder some gay people if he was allowed to. Again, not like he said it. Lighten up, people.

When Magic takes time out of his day to stop heaping praise on literally every object on this planet to tell you that he hates your guts, you know you’re probably a scumbag.