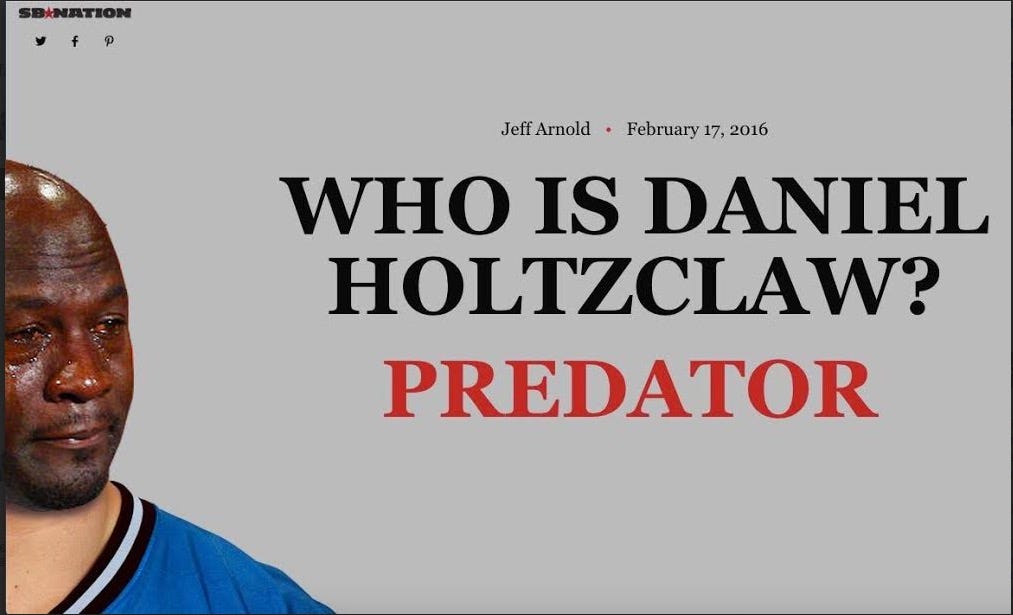 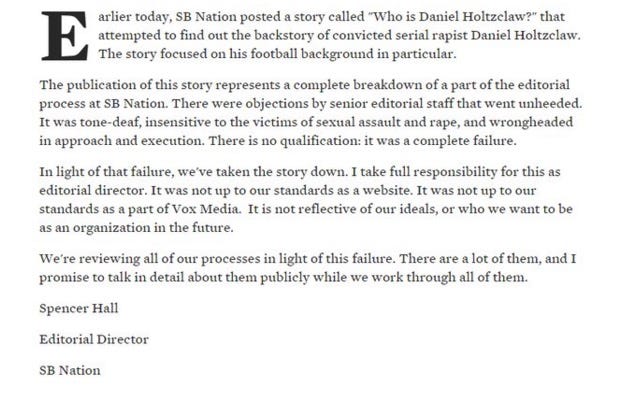 Several hours after SB Nation published a 12,000-word, highly-sympathetic profile of former Oklahoma City police officer Daniel Holtzclaw, a serial rapist who was sentenced to 263 years in prison last month for raping 8 women — all of whom were African American — while on duty, the article was removed and replaced with a note from the popular sports website’s editorial director.

“The publication of this story represents a complete breakdown of a part of the editorial process at SB Nation,” Spencer Hall wrote. “… In light of that failure, we’ve taken the story down.”

According to Hall’s note, the article was an attempt look at 29-year-old Daniel Holtzclaw’s backstory, particularly his career playing college football. But the piece turned out “tone-deaf, insensitive to the victims of sexual assault and rape, and wrongheaded in approach and execution,” Hall wrote.

“There is no qualification: it was a complete failure,” he added.

…Citing Holtzclaw’s family, lawyer, former teammates, a psychiatrist and Holtzclaw himself, the article suggests that the disgraced former police officer may have been innocent, or may have been driven to commit his crimes by brain injuries, a sexual disorder or disappointment that he was never drafted by a professional football team.

…the majority of interviews are with people who believe that Holtzclaw is innocent — or, at least, have trouble squaring the man convicted of sexual violence specifically targeted at some of society’s most vulnerable with the person they thought they knew.

…even after just a few hours online, “Who is Daniel Holtzclaw” has been roundly condemned as an example of how not to write about a convicted serial rapist.

Link to the cached article: Who Is Daniel Holtzclaw?

(Answer, that you might not think is made clear by the article: A guy convicted on 18 charges of rape, sexual battery, forcible oral sodomy and other charges)

What a horrible turn of events for SB Nation. Been working for years to solidify their spot atop the Ivory Tower of the blog landscape, looking down on the basement dwellers of the internet from high up on their pedestal, weaponizing their social media accounts without provocation every chance they got to tell us how disgusting we are. 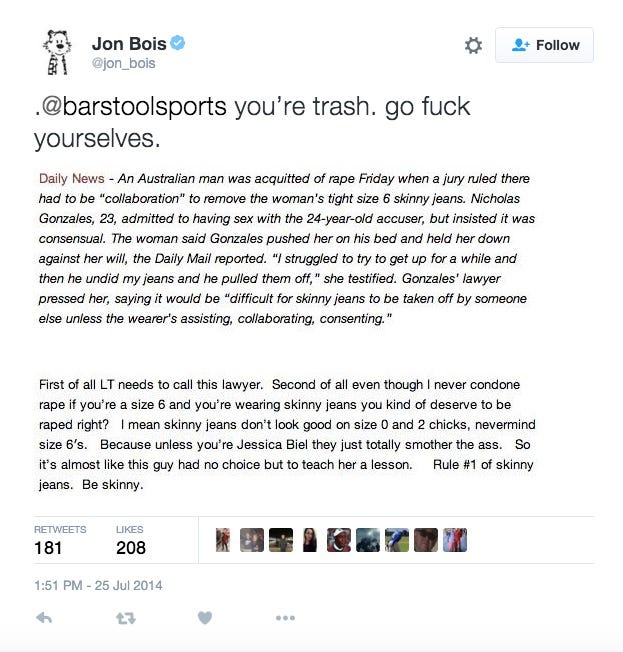 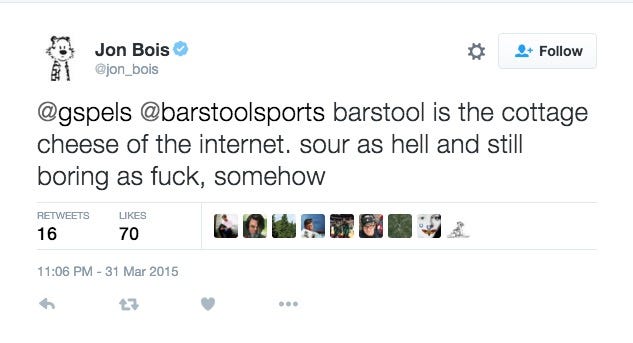 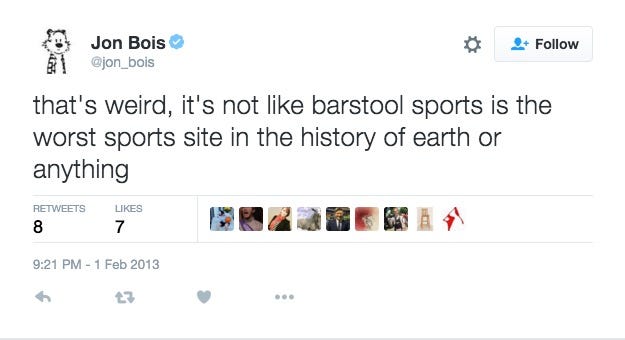 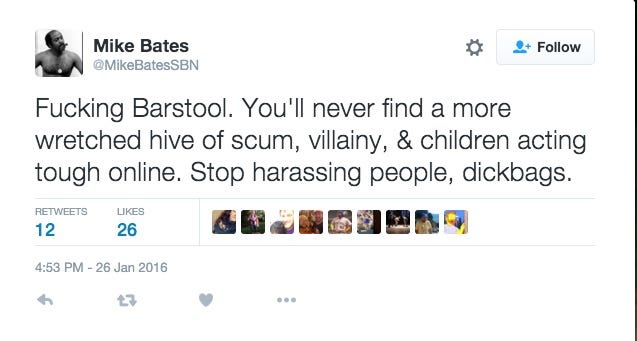 And now, poof. All gone. I mean when Deadspin puts out a hit piece on you…you know you fucked up. Your Moral Authority crown is officially removed. The throne is vacated. Every self righteous barb full of smugness and superiority that you toss around now rings hollow after paragraphs like this.

Now I know what you’re thinking. One writer doesn’t represent an entire site. Which I totally agree with. A lot of us here, myself included, like a bunch of the SB Nation guys and have good professional relationships with them, and I know for a fact they don’t support convicted rapists. But it’s weird, because one line of one blog from one writer has defined Barstool Sports.com for the past 6 years I’ve been here.

And lately it’s not even our writers that define us – it’s a handful of our millions of fans and followers who go overboard on Twitter. Internet commenters and anonymous Tweeters representing a company – never seen it happen literally anywhere except Barstool.

You also may be thinking two wrongs don’t make a right. Just because SB Nation fucked up doesn’t make Barstool any better. Ok. You’re probably right. Difference is that nobody here cares. Nobody here has ever called out another site repeatedly, over and over and over again, for being offensive or pushing the limits. And I can assure you 1,000% that nobody here refers to themselves as a “journalist.” We’re a humor site. We try to make people laugh. We don’t think we’re morally superior to literally anyone – just funnier.

Sometimes people think we go too far. Maybe some of our jokes have offended you. Maybe you think rape jokes are never, ever ok no matter what the context, and it makes you hate Barstool and never click on our site again. That’s fine. What you really can’t do though is take one line out of the context of a sarcastic satirical blog on a humor site and declare “Barstool supports rape” – unless, of course, you’re SB Nation, who I’m surprised hasn’t made a screenshot of the skinny jeans blog the background of their website by this point.

I would argue that a dead serious 12,000 word longform sympathizing with and humanizing a man convicted in a court of law of raping and sodomizing 8 women is a worse misstep than my boss’s sarcastic one liner 5 years ago. But what do I know. I’m just a dumbass Barstool blogger.

This article by Ryan Durling from way back during Howitzergate. 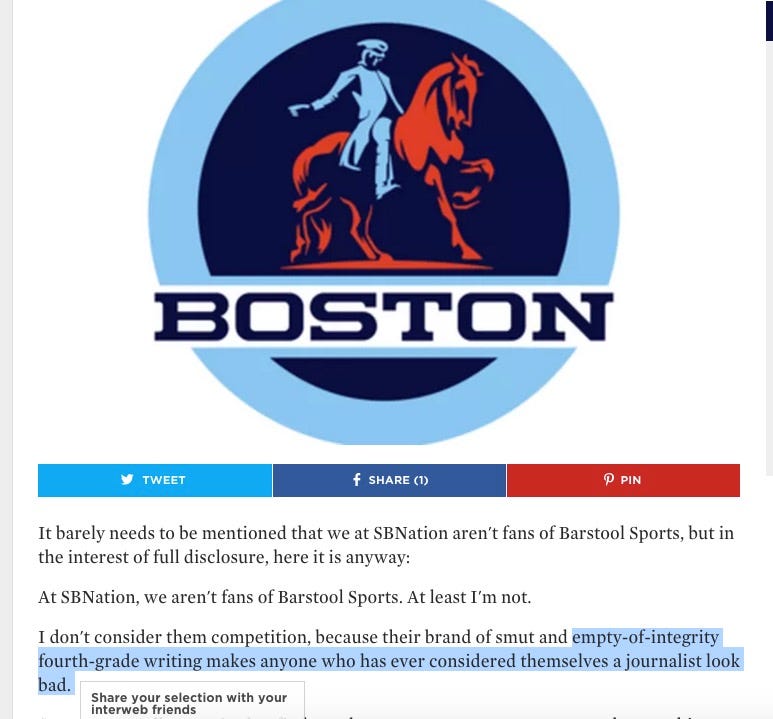 Turns out Graduate-level-thesis-quality writing can also make journalists look bad, when it’s a love letter to a rapist.

Oh and my favorite part. 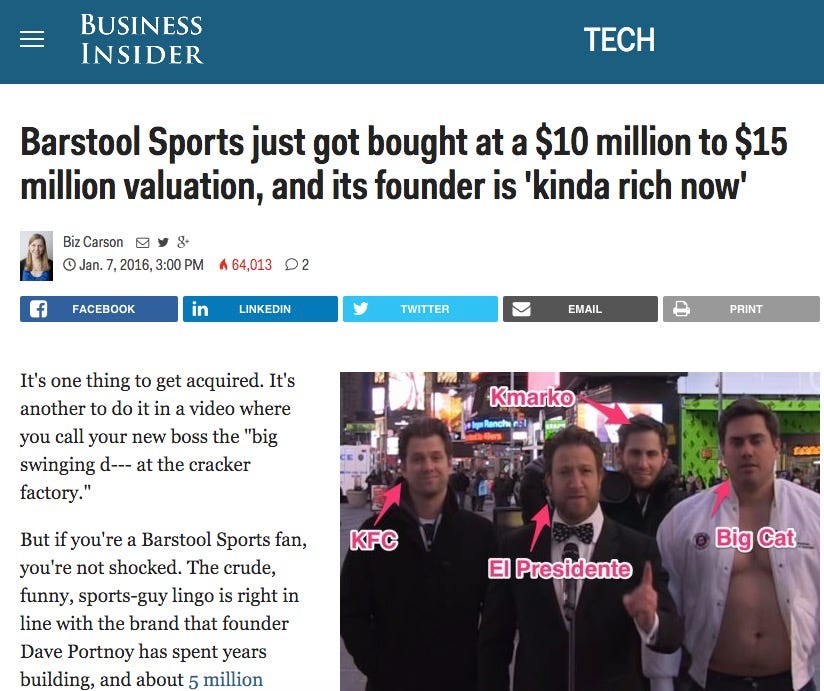