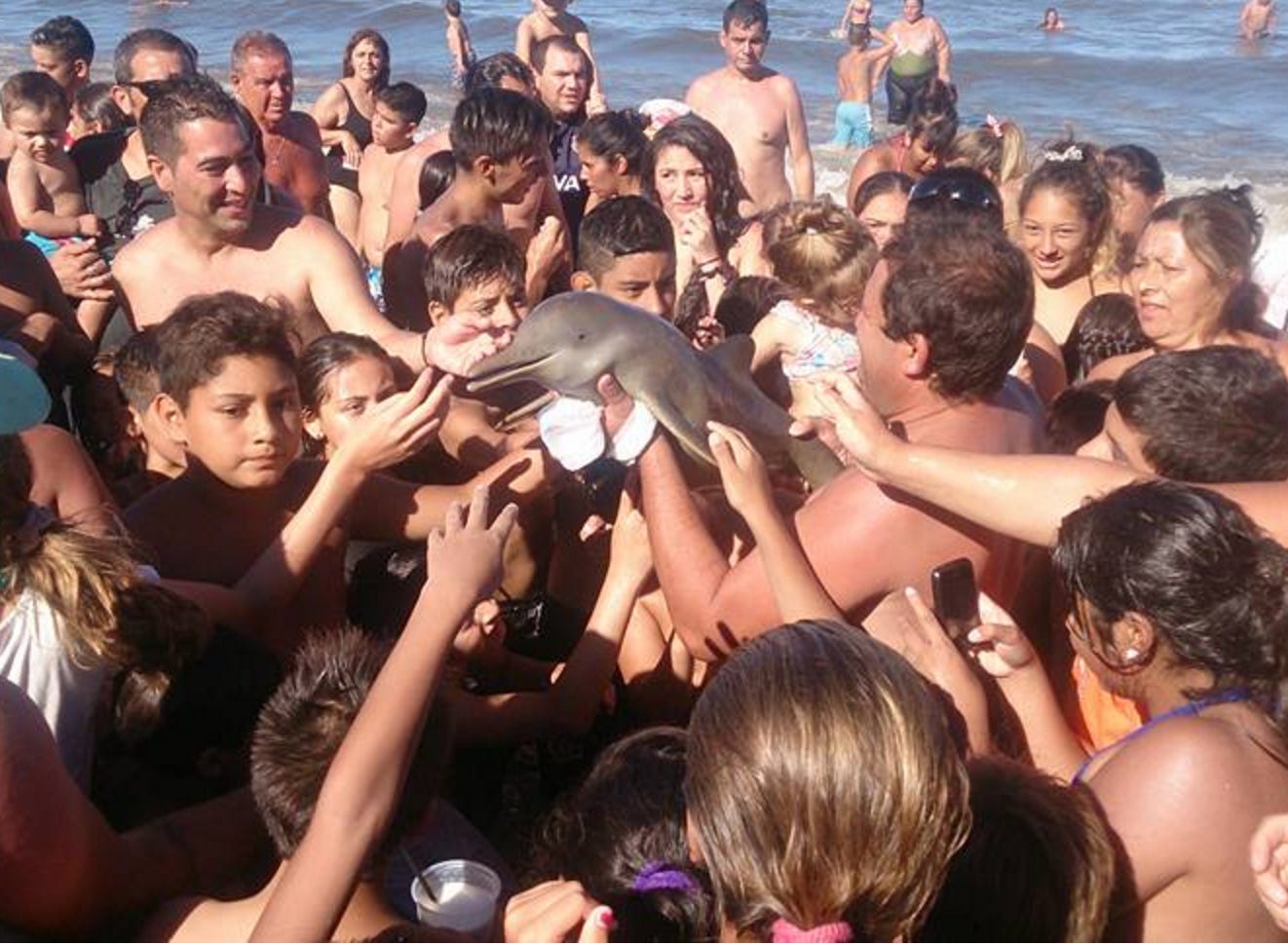 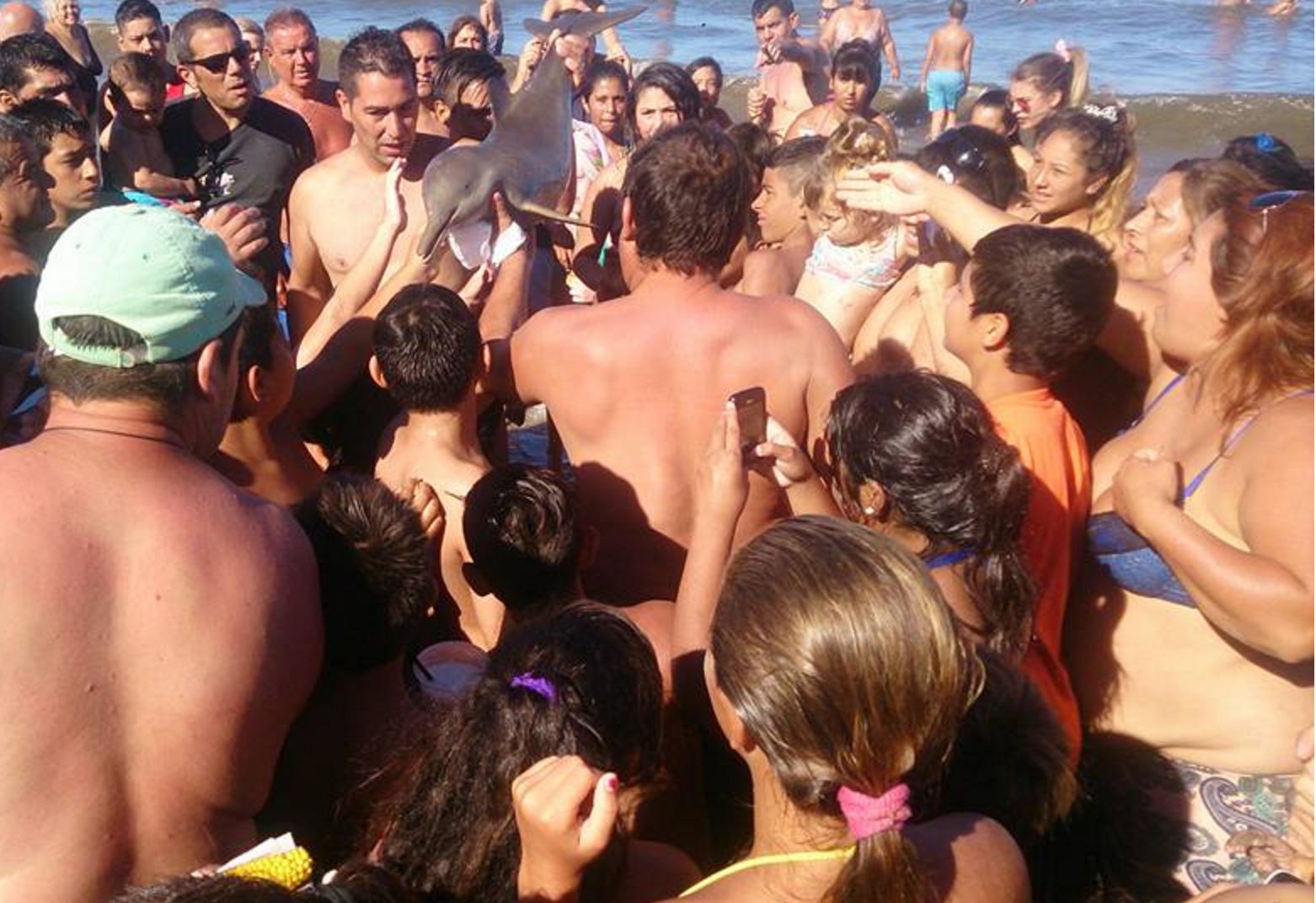 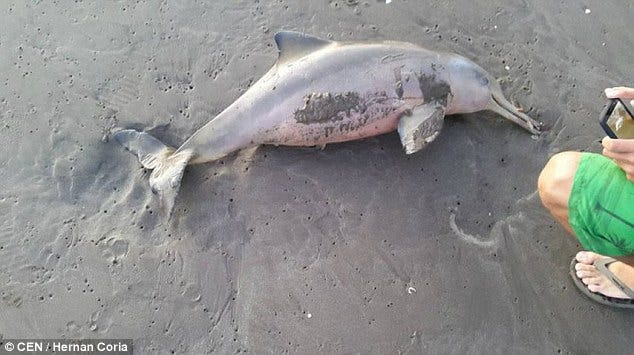 Daily Mail – A young dolphin has died of suspected dehydration after being paraded around like a trophy and stroked by a crowd of sunbathers who then abandoned it on the sand. The group of people huddled around the mammal taking selfies after it was found on the Argentine beach resort of Santa Teresita in the north-eastern Buenos Aires Province.  Dozens of people crowded round to look at the squirming calf as they strained to touch it, and have their photos taken with it.  The La Plata dolphin – also known as the Franciscana dolphin can live to be twenty years old. The last tragic images show the body, abandoned on the sand, as people continue to take pictures.  The episode has caused the Wildlife Foundation in Argentina to emit a public reminder about the vulnerable species, which only present off the coast of Argentina, Uruguay and Brazil. ‘The Franciscana, like other species, cannot remain for much time outside of the water, it has thick fatty skin which gives it heat and means that taking it out of the water rapidly causes it to dehydrate and die’, they said.  ‘This occasion serves to inform the public about the urgent necessity to return these dolphins to the sea as soon as possible if they find them on the shore. It is fundamental that people help to rescue these animals, because every Franciscana counts now’, they finished. There are only around 30,000 examples thought to be left in the world.

Well I dont want to be dramatic here but we need to declare war on Argentina. The last thing I want is for this country to be embroiled in an unnecessary war but sometimes the evil in this world leaves you no choice. Like did we want thousands and thousands of people to die in World War 2? No. But Hitler was slaughtering millions of people and we had to do something. Thats how I feel about Argentina and these dumb ass motherfuckers who pulled a baby dolphin out of the water and let it fucking die. I cant even tell you how much it makes my blood boil looking at that fat dumpster reaching over the crowd of people trying to pet it. We should leave that whale on the beach and let her fucking starve to death. Every last one of them should be round up and suffocated to death.

So here’s your ultimatum, Argentina. You gather up all the people who were on that beach – women and children included – and you hand them over to America for us to slaughter them in cold blood, OR, we declare total war on your country. Military, civilians. Everyone. Make right by this baby dolphin and his family or we will wipe Argentina off the face of the earth. You have 15 minutes to respond.

PS – In like 500 years when dolphins have evolved and are smarter than us and take over the planet, we will look back and pinpoint this moment as when dolphin-human relations soured. Well done Argentina. You dont even realize it because you’re too busy taking selfies with dead animals like a bunch of mouth breathing retards, but you just doomed the human race.