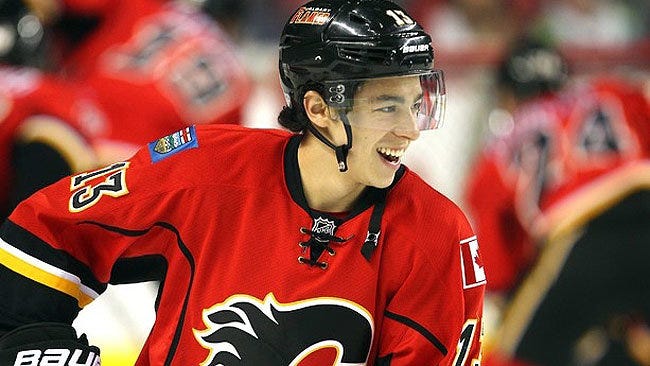 The World Cup of Hockey is coming up this September in Toronto. A lot of people feel a lot of different ways about it. Personally, I’m excited as heck about it since I’m a firm believer that any hockey is better than no hockey. Also, I like to embrace any chance we get to watch THE United Sates of America compete for world domination in anything. But one of the things to look forward to the most at this event is the North American 23&Under team that will be comprised of the best players from both USA and Canada that don’t turn 24 until after October 1st. Here’s a projected lineup for what that team could look like via ESPN’s Craig Custance.

The goalies will most likely be John Gibson from Anaheim and Connor Hellebyuk from Winnipeg. And when you look at this projected lineup, you can tell that the NHL is going to be in some great hands for the next decade or so. When you look at this lineup you see a shit ton of speed, you see a shit ton of skill and you see, most importantly, a shit ton of creativity. I get that having a team that combines USA and Canada kind of takes away from the World Cup aspect of this tournament, but the event’s main objective is to grow the game. That’s why ESPN has the rights to broadcasting it. And if you want to grow the game, these are the guys who are going to lead the way. They’re young, they’re exciting to watch and they represent the new age of the game. Before you had the North American brand of hockey and you had the European brand of hockey. But the game is trending in a way that brings the best of both brands together as one. And that’s pretty much exactly what this team represents. There’s a little bit of everything going on here and they’re a perfect selling point for the league.

Now I just need to know what kind of jersey they’ll be going with. Personally, I think there needs to be an inter-squad scrimmage to determine if the jersey more closely resembles an American sweater or a Canadian one. Also, this team is going to fuck. Like a lot. A bunch of young kids with no wives and no kids staying in one of the biggest hockey cities in the world? Pretty sure their dicks will all be working overtime. Must be nice. Guys who will probably fuck the most in Toronto: Ekblad (have you seen his hair?), Galchenyuk (quiet guy but he’s definitely into freaks), and then Gaudreau and Monahan might try to double team somebody since they seem to not like doing anything alone.

We can get a little more World Cup of Hockey coverage going as we get closer to the tournament if people want. In the meantime, let the NHL on ESPN theme get you pumped up for a tournament that is still 7 months away.