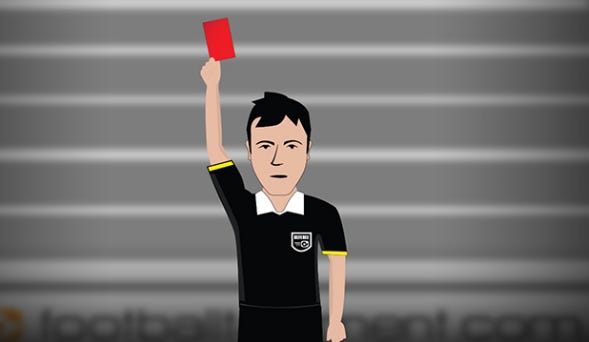 (Source) Police in Argentina are searching for a footballer who is said to have shot and killed a referee after being sent off in a match played in the Córdoba province.

According to local reports, the player retrieved a gun from his bag after being shown a red card, returned to the pitch and shot 48-year-old César Flores dead.

A police source told the Efe news agency: “It all happened during the football match. We don’t know [exactly what took place], but it appears the player was angry, fetched a gun and killed him.”

Soooo why the fuck does anyone ref soccer in South America? I think it’s right behind coal miners and crab fisherman for most dangerous job on the planet. The crazy thing about this story isn’t that it happened, it’s that I didn’t even blink when I saw it. I actually had to check to make sure I wasn’t reblogging someone from a month ago. Refs are public enemy number 1 once you get south of the border. So the question we now find ourself asking is, shouldn’t they let refs carry guns too? I’m not a gun guy, I’m not a more guns equal more safety person, but in this specific case I feel like refs should get to pack heat. At the bare minimum put a sniper ref on the roof for security. Like the extra ref who sits at the scorers table and can sub in if one of the refs gets injured. Only this guy is just there to make sure the ref stays alive and doesn’t get murdered on the field. Did I just fix South American soccer? I think I did. Make it a half soccer game, half gun fight at the OK Corral. I’d pay to watch that shit any day of the week.

Bet the ref in the Oregon State game last month feels like a real pussy now.