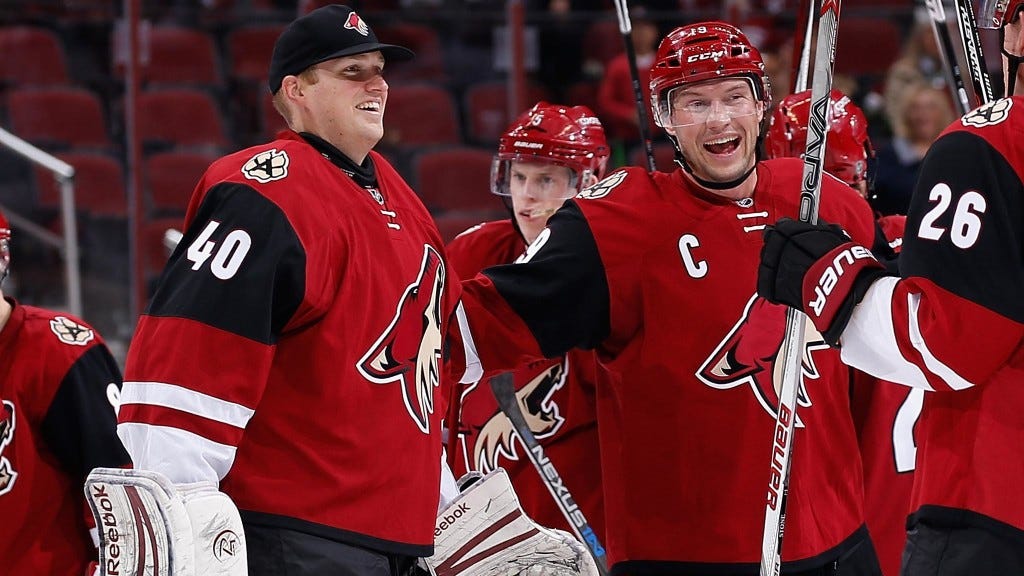 NHL – Nathan Schoenfeld got the chance to serve as Arizona Coyotes backup goalie against the Montreal Canadiens on Monday after Anders Lindback sustained a lower-body injury during an off-ice activity prior to warmups.

With starter Louis Domingue the only healthy goaltender on their roster, the Coyotes called on Schoenfeld, who played for Arizona State University’s club team and more recently in a local men’s league.

“This was incredible,” Schoenfeld said after the Coyotes’ 6-2 win. “It’s going to take a little while for it to soak in that this all really happened. Five weeks ago, my wife delivered twin boys, and tonight I’m on the bench as the backup goalie in an NHL game. Pretty good year so far.”

I’m a huge sucker for emergency goalie stories. And how can you not be? Nathan Schoenfeld is me. Nathan Schoenfeld is you. A guy who grew up playing the game and loved the shit out of it. The only problem is that he was never good enough to make an actual career out of it. Then one day a Swede gets hurt and next thing you know, he’s sitting on an NHL bench as a back up playing against one of the most historic teams in the league. A one-in-a-lifetime kind of experience. He gets to suit up in the jersey. He gets to go out for warm ups. He gets to open the door for guys getting on and off the ice. He gets to wear the hat on the bench. That’s what we like to call living the dream and Nathan Schoenfeld got that. The guy just had a set of twin boys. Well guess what he gets to tell them now whenever he wants to? That their dad once suited up for an NHL game. Not many other people in this world get to tell their kids that, but Nathan Schoenfeld does. He was also the MVP of the night.

I’d b very interested to know if Schoenfeld took off his pads and jersey yet. I’d milk that experience for all it’s worth. But I will say this, however. I’d love for just one time to see one of these emergency back ups to actually have to get between the pipes during a game and completely steal the show. To go from an emergency back up to a starting goaltender in the NHL. Maybe I’ll actually just write a movie about it because there aren’t enough hockey movies out there. But it would be great to see one of these guys step in and just rob a guy like PK Subban or Max Pacioretty out there. With how fucking atrocious the Habs have been over the past couple months, I’m sure it wouldn’t have been that farfetched.

And while we’re on the topic of emergency goalies…