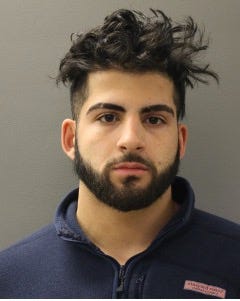 QU Chronicle – Sophomore Nicholas Pappas was arrested Friday after Hamden police found weapons in his car, according to a police press release.

Police say they received a complaint about a social media post that featured the student off campus firing a handgun into the ground. The Chronicle obtained a video from a student’s Snapchat story, which shows Pappas driving a car and shooting a firearm out the window while someone else was filming. In the four-second video, Pappas is seen driving by houses when he fires the weapon.

The complaint led the police to search Pappas’ car and they found four weapons: a police baton, an automatic switchblade knife and two pairs of brass knuckles. Officers arrested Pappas on Jan. 29 at police headquarters.

The university issued Pappas a suspension, according to Vice President for Public Affairs Lynn Bushnell.

It becomes clearer and clearer every day – social media is the next step in the evolution of Darwinism. Give everyone a Twitter, Instagram and Snapchat account, then wait for the dumbest among us to ruin themselves with it. Natural Selection at its finest. Weeding the most braindead classmates out of the college gene pool one viral post at a time.

For example – blasting out a video of you shooting a gun during a joyride to your Snapchat Story.

Immediately getting stopped and searched by the police who find the gun, police baton, automatic switchblade and two pairs of brass knuckles. Not sure what the list of possible consequences you had in your head was, but it had to cross your mind “getting arrested and suspended and expelled any day now” had to be up there right?