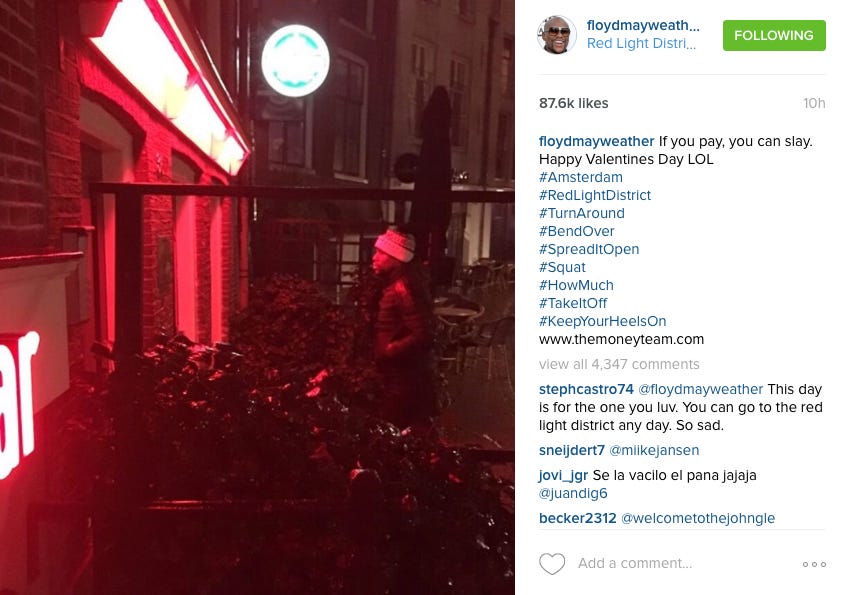 Not that Floyd was having an problems before he visited the red light district, but the point stands, If you want to feel sorry for yourself, go for it, just remember a little money can get you to the #TakeItOff #SpreadItOpen #BendOver #Squat portion of the evening. Floyd is living proof.

The main point of this blog (you look like that Valentine’s Day topical journalism hook?) was to say how awesome it must be to be so rich you truly don’t care what anyone else thinks of you. Floyd Mayweather by all accounts is a huge scumbag, a dude who has hit multiple women, but if you ask him if he cares there’s no way he does. He’s so rich and in his in own world that any type of backlash from anything is the last thing he will ever think about. Must be incredible. To be like yeah, I’m going to throw out an picture telling some hookers to #SpreadItOpen on Instagram and anyone who says shit won’t even reach my ears or brain. It just won’t. Living in a blissfully ignorant world where Floyd is not only rich, but actually thinks he’s a good person  and has never done anything wrong. Probably helps to be illiterate so part of your ignorance is the fact that you literally can not read the hate written about you, but still, living in that type of bubble must be unbelievable.

Chances Steph Castro was recently dumped by her boyfriend because he wanted to keep fucking strange? 10,000%