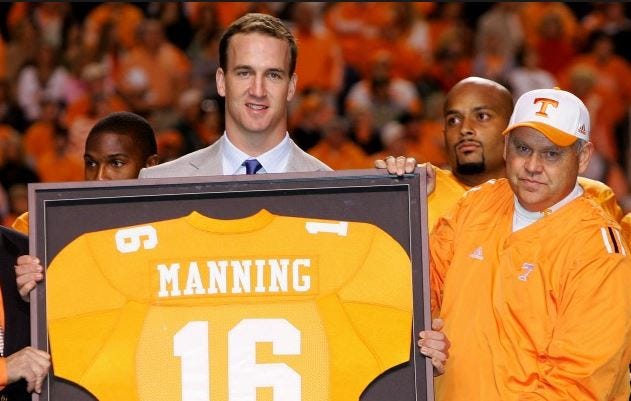 Tennessean.com – A sweeping lawsuit filed by six former female students against the University of Tennessee last week argues its athletics department has long condoned a “hostile sexual environment” stretching back to the mid-1990s, citing nearly a dozen instances of former student athletes accused of sexual assault — including NFL star Peyton Manning. The allegation that Manning sexually assaulted a female athletics trainer while in college was first reported in 2003, but on Saturday a widely shared New York Daily News column about the alleged incident and a subsequent lawsuit filed by the trainer drew widespread attention on social media.

The UT lawsuit filed last week calls out an alleged 1996 incident in which Manning, a UT football player, was accused of placing his naked genitals on the face of the female trainer while she was examining him. Manning has denied the allegations and said he was “mooning” a fellow athlete. The trainer, Dr. Jamie Naughright, later sued Manning after he described her in a book as “vulgar mouthed.”

The lawsuit says “in 1996, (then) Jamie Whited, the first female associate trainer in UT’s history, reported an incident to the Sexual Assault Crisis Center in Knoxville alleging UT football player Peyton Manning had, in brief, ‘sat on her face’ while she was assessing the extent of an injury. The incident was settled in 1997 … conditioned on the victim leaving her job at the university.” The UT lawsuit cites a USA Today article from 2003 about the woman’s subsequent lawsuit against Manning for his reference to her in his book.

I’m actually sort of excited to see how this plays out. Because if there is one thing we’ve learned about the Manning Mafia it’s that they will go to extreme lengths to silence any opposition. Oh Peyton dragged his balls on a female trainers face? Lets discredit her and say she loves getting fucked by black dudes. (Yes Archie really said that) Let’s say he was just mooning his buddy and the female trainers face just happened to get in the way of his dick even though there are like 10 witnesses that say he teabagged her.  Oh Peyton got busted using HGH? Lets discredit Al Jazeera and send fake cops to Charlie Sly’s house to intimidate them. Let’s make Peyton’s wife take the fall. There is literally no level the Mannings won’t stoop to in order to keep their all American image intact and the endorsement deals rolling in. So this should be interesting to see how this plays out. Yes it’s 20 years too late, but I guess better late than never.

PS – This is a prime difference between Peyton and Brady. You think Brady would ever have to trick a chick into touching his dick? You think any female on earth would ever sue Tom Brady for dropping his genitals on her head out of the blue? That’s like every little girl’s wet dream. But Peyton is so ugly and has such a noodle arm he had to pull the old “my ankle hurts, boom here is my dick in your face trick” to hook up in college. Pathetic.

Double PS – How about this hot take from our boy Clay Travis at Fox Sports?

“So twenty years ago Peyton Manning — as part of a locker room prank — pulled off a mooning and teabagging combo on a trainer. It was juvenile and dumb and the trainer eventually included the allegation as part of a sexual harassment suit she filed against Tennessee. But it speaks to Peyton Manning’s image that this is the absolute worst thing anyone can find that he has done in nearly twenty years in the public eye, a locker room prank gone awry. And that some people in the Internet’s outrage brigade are aghast over this behavior twenty years after the fact. My God, a mooning and a teabagging in a locker room!”

Listen I agree making this headline news 20 years after the fact is pretty weird.  But let’s not act like this was just a good natured locker room prank that went awry.  Peyton shoved his cock in a female trainers face.  He teabagged a chick who wanted nothing to do with it and then smeared her name when she reported it.  To quote Billy Madison….That’s assault brotha