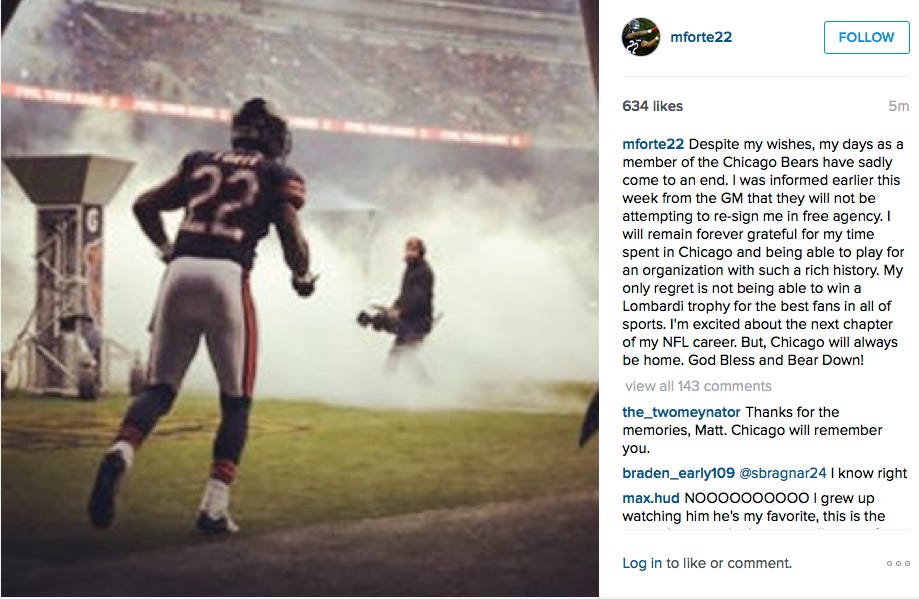 This is one of those times where your team does the right thing, keeps the future and rebuilding of the roster in mind, but it still sucks. Matt Forte was a great Bear on some really shitty Bear teams. He was Mr dependable year in and year out. He missed 8 games total in 8 seasons. That’s incredible for a running back. In that time he was basically guaranteed to be around 1,000 yards rushing, 500 yards receiving, and 8-10 touchdowns. A guy you could count on to do the right thing both on and off the field. And that’s the part that hurts, Matt Forte was one of those guys you enjoyed rooting for. In a cynical world where most guys are just playing for the paycheck Matt Forte made it seem like he truly cared about the fanbase in Chicago. I know that sounds sappy and it probably is, but it’s the truth. That connection between player and fans doesn’t happen every day in 2016. So best of luck to Matt, thank you for being a fun guy to watch on Sunday, and I hope you win some football games somewhere else because you deserved to play for better teams than some of the ones the Bears trotted out in recent memory. Just don’t you fucking dare sign with the Packers.
On a sidenote I love that Ryan Pace got in front of this. I know some people may say why not just give him a low ball offer? Why not see if he’d take a discount? Well look at how Emery handled Urlacher. Low ball offer, insulted him, everyone hated each other and the team basically turned a legend away and created a ton of bad blood. Forte wasn’t going to take a steep pay cut nor should he. The Bears aren’t in a place to be paying 30 year old running backs big money. They’re not 1 player away, they’re about 20 players away, so tying up resources in a guy like Forte makes zero sense when you theoretically have a replacement in Langford (not saying he’s as good as Matt Forte). I’m guessing Ryan Pace saw what the Bears could pay him given their current predicament with the roster having so little talent and decided better to not even slap a guy like Matt in the face. Take care of it this way rather than draw everything out and create a sour taste in everyone’s mouth. Respect all sides in this one. It looks like our Front Office could be, dare I say, growing up? Handling things the right way, pinch me, this can’t be real.