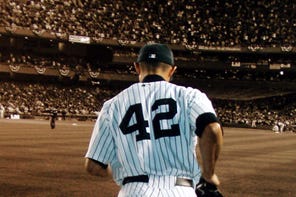 But perhaps the biggest date on the calendar is Sunday, August 14, when the Yankees will dedicate a plaque to legendary closer Mariano Rivera in Monument Park before taking on the Tampa Bay Rays.

Rivera retired after the 2013 season, finishing his career as baseball’s all-time leader in saves, with 652. He won five World Series titles with the Yankees.

In recent years The Yankees have been criticized for giving everyone who ever played for the team a plaque in Monument Park, but this one will be the most deserved honor in a while. Last year it was Bernie, Jorge and Andy that got plaques, and while I do think they all deserved the honor, Mariano Rivera is a no doubt first ballot hall of fame entry, so the plaque is a no brainer.

As for the rest of the promotional schedule: 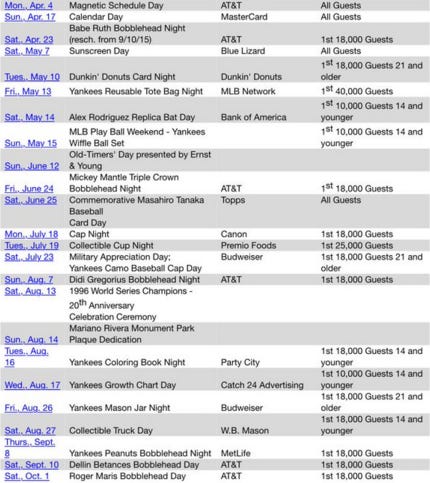 This isn’t a bad lineup of giveaways. The Ruth, Maris and Mantle bobbleheads are going to be packed houses early because bobbleheads are the Beanie Babies the 21st century and everyone thinks they’re going to be worth a ton some day. I just home that Pogs make a comeback first because I have a whole 1995 Yankees set.

The big get though will be May 14th when I am roaming around the stadium offering kids 12 and under $20 for their A-Rod bat. The man is 27 home runs from tying Babe Ruth on the all-time home run list, so expect a big crowd to turn out against the lowly White Sox.

PS: August 26th is going to quickly turn into “break that mason jar you just got” night at Billy’s. Make sure you get one this year because I don’t see this promo coming back.