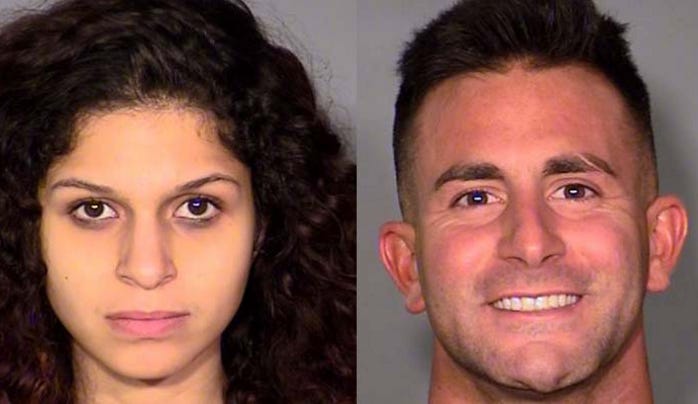 ABC 13 - What happens in Vegas doesn’t always stay in Vegas. Philip Panzica, 27, of Houston said he and his girlfriend visited Sin City on Friday. Panzica said the two got into an argument and he left. “I was just walking down the strip,” said Philip Panzica. As he wondered, he met 21-year-old Chloe Scordianos. He said he had one too many margaritas and then they made their way to the observation wheel. It looks like a ferris wheel. It’s called the High Roller. It contains glass cabins so people can see out. Panzica said the two went into one of the glass cabins and one thing led to another.  “I probably shouldn’t have done that. We acted pretty childish about it, but we were in Vegas,” said Panzica.

According to police, Panzica removed his clothes and Scordiano’s dress. Since the cabins are glass, others can see inside. It happened in the daylight around 3:45. Investigators say video surveillance captured the act. The two were arrested for sex acts in public. The officer says the two told him, they were just having a good time and didn’t think anyone would notice. Since then, Panzica says he and his girlfriend have made up and are trying to work things out. “I forgave her. She forgave me. She bailed me out of jail, $3,000 later.”

YES! YES! YES! What great news! This story is awesome! You recall yesterday’s blog where it was first reported these two love birds getting freaky deaky on the Vegas High Roller. I wrote that you don’t arrest them for doing that- it’s Vegas, baby! I’d be more shocked if people got drunk and didn’t fuck on the High Roller. Turns out it was actually the middle of the day, but whatever. Semantics. Now great news comes today that the guy was cheating on his girlfriend by fucking a stranger he met on the strip on a ferris wheel. It doesn’t get much more Vegas than that.

So let us recap this man’s life: He brings his girlfriend to Vegas. They get in a fight because OF COURSE THEY DO. Sidenote: I want to know the % of young couples that go to Vegas together that end up getting in fights/breaking up. 80%? Some people just can’t handle Vegas…especially those annoying couples who all they do is drink and fight and then make up and ruin everyone’s night. We all have that couple that we know but barely hang out with because they fight nonstop. Well plop them down in Vegas with free drinks inside and 80 ounces of frozen marg outside, and yep, shit is going to go down. So anyway, this dude and his girlfriend get in a fight. He walks away. He meets a 21 year old on the strip. They drink together. They get on a ferris wheel at 3:45 in the afternoon and fuck. They get arrested. Man’s girlfriend bails him out of jail, apologizes TO HIM, and they’re all good! It’s all gravy, baby! Fascinating story. Have to assume he was yelling at her for cheating on him and that was his way of getting back. Seems like a healthy, happy, ready to start a family relationship. Just so glad they worked it out and now can go bang each other on the ferris wheel, how they always dreamt it would be.