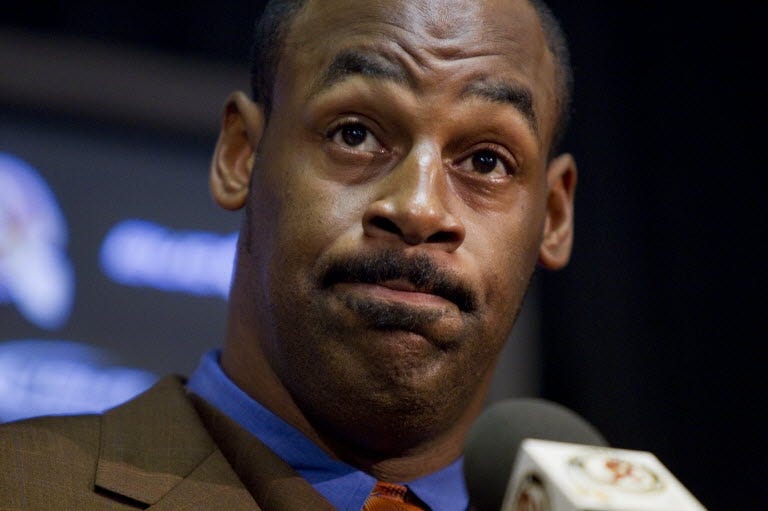 “My favorite sandwich, as I say ‘sammich’ — that’s the hood talk — is bologna and cheese, with mayo. Put that in the microwave for 10 seconds. Eat that.”

EW. Is this a common thing? Because it’s fucking sicking to mankind. Billions of years of evolution to become the top of the food chain and here a millionaire is resorting to microwaving bologna and mayo for his favorite meal. I’d rather eat a 5-year-old Arby’s sandwich that was baked in the Dutch Oven of Andre The Giant than whatever Donovan McNabb ingests regularly. Maybe if he laid off of a couple thousand of those “Sammich’s” during his later years he’d still be playing the game at a mediocre level.

Actually, anything that’s already queasy to the stomach that meets the microwave shouldn’t be legal. We all tried a shot called a Urine Sample back in the hey day – Mix Natty Ice with gin and microwave it for 10 sec. Let me tell you this, heating up then consuming Natty Ice should be recognized by the UN as a crime against humanity. And yet this shot is quite possibly the only time where the taste of only straight Gin is welcomed with open arms. If you young whippersnappers want to try these shots you also might as well take your pants off beforehand because you’re going to lose them in less then an hour anyways.

Other “Highlights” from the greatest QB in Eagles history’s AMA:

Did he puke in the Super Bowl?

“No, I didn’t puke. It’s unfortunate that we still talk about this 11 years after playing in the Super Bowl. But, no. That did not happen and hopefully we can stop talking about it. Once again, go watch the game tape.”

I defend him on that. He didn’t yack. He did, however, combined with Andy Reid’s prowess run the 2nd slowest urgent 2-min drill in NFL history. The 1st now belongs to Doug Pederson in this year’s playoffs. The definition of insanity…

Can the Super Bowl end in a tie?

“Hahaha. Nice one. We’re still bringing up the tie. I wasn’t the only one who didn’t know. That was a regular season game, sillies.

Goddamn right we’re still bringing up the tie comment. Even money he still doesn’t know. But props for typing out the plural form of “Silly”. Donovan must have only had 8 drinks that morning before the AMA started.

First “welcome to the NFL” moment?

“My first “welcome to the NFL” moment was when my name was called at Radio City Music Hall in New York. I was drafted by the Philadelphia Eagles and I was booed.

Still despise those “Dirty 30″ Angelo Cataldi teabagging assfucks who did this and added to Philly’s bad rep. Yeah, let’s draft Ricky Williams even though we have Doug Pederson as the only QB and Duce Staley just rushed for 1K+. Brilliant job you dicks.

“He was a mentor to me. Doug ended up being the backup for Brett Favre for I think 8 to 9 years, so I got a little tutoring, so to speak, in the West Coast offense, how to be a professional quarterback, how to prepare, different approaches, what Brett did (good and bad) and I tried to add that, obviously, to my preparation each and every day.

Now, Doug has been on the journey now of being a high school coach, quality control guy, quarterback coach, offensive coordinator and now a head coach. I think what he brings is a fresh mind, a different approach. Andy Reid has kinda tutored him throughout this process, and we’ll see what he can do on his own.”

Some fucking “Journey” he lists there. Nothing against Doug, but nobody goes from HS coach to the big leagues unless his wife is best friends with an NFL head coach’s wife. True story.

What about the current Eagles team?

“The current Eagles team, I think they’re talented. Doug Pederson coming in has a fresh mind, a fresh attitude, gonna change the culture over there in Philadelphia, so it will be interesting to see how they are able to get back on track. Will they be able to? I believe so. How fast will they be able to? We’ll see. Maybe it will be next year, maybe it will be in two years, but I think everyone should be patient and just give them a chance.”

Yup, let’s be patient and wait another 56 years for a championship.

How many calories a day would he consume during the season?

“While you’re playing, you’re constantly sweating and constantly burning calories, so we probably eat about 3,000, maybe 4,000 a day.

It’s just that we’ve all been there when we’re younger and we’re constantly sweating and losing weight. When you get older, it seems like you can’t lose a pound. So, to count up how many calories we’re eating, if you’re participating in sports, probably around 3-4,000.”