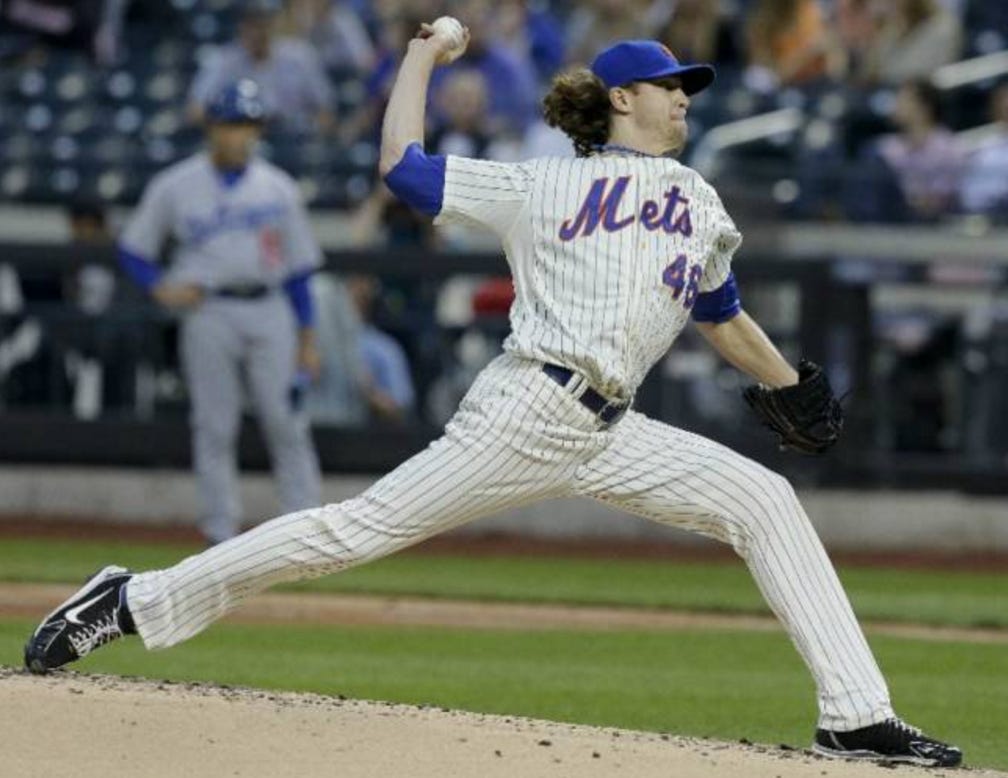 ESPN New York – Jacob deGrom appears the logical starting pitcher for the New York Mets to sign to a long-term deal. And apparently deGrom believes that as well. “I’m a little bit older, so I might be more willing to do something like that,” deGrom, 27, told the New York Post. “You just have to look at what is fair so both sides get a decent deal. It’s something I’d have to look into and make sure I agree with it. …I haven’t thought that much about it and I have to talk to my agents and stuff and look at the numbers and decide what was favorable.” General manager Sandy Alderson implied last week that no extension talks were currently taking place with any young Mets players. Still, deGrom makes the most sense among the starting pitchers. Matt Harvey appears unlikely to sign a long-term deal before reaching free agency after the 2018 season, since he seems most interested in maximizing dollars rather than security. And Steven Matz and Noah Syndergaard are under the Mets’ control for six more years before reaching free agency, so there’s really no incentive to do something now. Syndergaard should be a Super Two, so his salary first starts escalating through arbitration for the 2018 season. DeGrom has one year, 139 days of service time. So he is under the Mets’ control for five seasons, through 2020. A deal covering at least six years would make sense, since it would buy at least one year of deGrom’s free agency while giving him a nice security blanket should an injury occur or his career otherwise gets sidetracked.

I feel like Mets fans saw this headline and this quote today and got all excited. Like this was the first piece of the puzzle the Mets needed to be able to keep these arms as long as possible. Truth be told when you look at the numbers, its really not that great of an idea for the Mets. There’s a reason deGrom says he’s open to it. He’s the oldest of the bunch and the Mets control him until 2020. He’s arb eligible in 2018 as a 30 year old. Thats not exactly an enviable position to be in. The Mets already own him throughout what are probably the best years of his career, and for the duration of this World Series window. Giving him a long term contract to lock him down for maybe a year or two of free agency at the age of like 32-33 isnt some sort of financial break that sets this team up for years to come. They’re probably doing deGrom a favor.

Now, I’m not opposed to it. I like the notion of making deGrom a long term Met and I like the idea of setting a precedent that we want to keep these pitchers together as long as possible. Maybe set an example and some of the younger arms follow. But dollars and cents wise I dont think this is as big of a deal as Mets fans want it to be. If Matt Harvey wants to sign something long term, now we’re cookin with gas. It wont happen, but I’m saying thats the sort of long term deal to get excited about. If Noah Syndergaard wanted to go the Evan Longoria route and sign a team friendly 6 year deal, now we’re talking about freeing up money to maintain this rotation.

But Jake deGrom’s age and contract status just doesnt allow that. Maybe save a few bucks buying out the arbitration years. Save a few over one year of free agency or something but thats about it. Doesnt even really matter, by 2020 they’re all wearing a ring so who cares at that point.