You know what Brian Windhorst is to Lebron James? Well I like to think that that’s what I am to Bagel Bites. I think of myself as the *premiere* Bagel Bites writer on the internet. And with that title, I’ve recently come into some insider information that Bagel Bites just recently started producing Buffalo Chicken Bagel Bites and plan on hopefully releasing them at some point this year. So consider this a Barstool Exclusive.

Now if you remember from a year or so ago, we settled the great debate between Bagel Bites and Pizza Rolls. You can read the blog here but I think everyone would agree that Bagel Bites wins in a landslide. One of the only knocks that you could possibly have on Bagel Bites is just that they don’t have the same level of variety as Pizza Rolls. For the longest time you had your regular, you had your pepperoni, and you had your sausage and pepperoni. Then they decided to change up the game a little and come out with Breakfast Bagel Bites last April. That still doesn’t even come close to Pizza Rolls amount of flavors which include Buffalo Chicken, Jalapeno Popper, cheese, chicken parm, meatball marinara, pepperoni, sausage, supreme and triple meat. But why does Pizza Rolls offer so many flavors? Well because they know they have an inferior product. They know they had to do something to close the gap between them and Bagel Bites so these gimmicks were their only hope. That is, of course, until now.
Bagel Bites could have nothing but their original flavor and still reign supreme over Pizza Rolls any day of the week. But when you mess with the bull, you get the horns. And right now, Pizza Rolls are about to take that horn right up that little asshole of theirs. You wanna start throwing around all these crazy flavors? Well two can play that game, bitches. So if anything, I guess I owe a bit of gratitude to Pizza Rolls. Because without them trying to get cocky with all their flavors, maybe I’d never live to see the day that Buffalo Chicken Bagel Bites were a real thing.
Sidenote: Buffalo Chicken is my 2nd favorite pizza. Obviously plain is the OG and always deserves that #1 spot in the power rankings but Buff Chick is a close 2. After that, I think I have to go with Hawiian. I know that’s going to upset a lot of Pizza Traditionalists out there but if you can’t enjoy a nice Hawaiian pizza every now and then, you just hate to have fun. I’ll admit that bacon & pineapple is a little better than ham & pineapple but still, they both kick ass. Also, never underestimate the powers of a nice slice of white. I’m not saying that white should ever be anybody’s go-to slice, but like twice a year with a tall glass of birch beer? Fuck yes.
Double Sidenote: Chicken Parm Sliders. Take two Bagel Bites as the buns, chicken tender in the middle, Mountain Dew Code Red and have yourself a day. 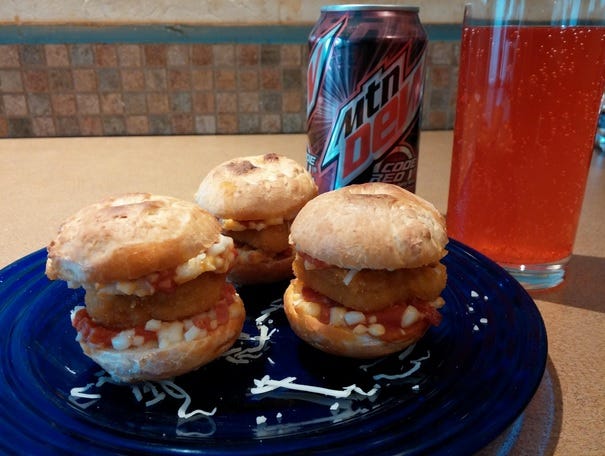