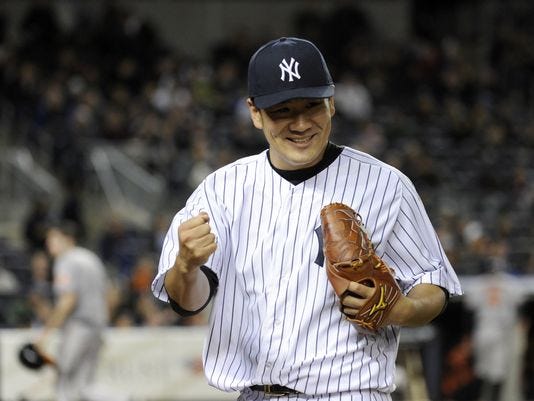 MLB – Yankees right-hander Masahiro Tanaka threw off a mound Tuesday, his first time doing so since having arthroscopic surgery to remove a bone spur in his right elbow in October, according to pitching coach Larry Rothschild.

Rothschild told The Associated Press that Tanaka’s throwing session took place in New York and that Tanaka’s rehab is on schedule. The Yankees have said that the injury dates back to when the 27-year-old pitched in Japan.

“From what I’ve been told, his throwing program was right on target,” Rothschild said, according to The New York Post. “He’s on schedule to have a normal Spring Training and season. We’ll have to monitor his rest and his elbow, but that goes for a lot of guys.”

In the grand scheme of Tanaka’s elbow, getting a bone spur removed was a minor concern, but still a concern heading into Spring Training. The starting rotation is the biggest concern heading into 2016, with a majority of the rotation having spent time on the DL in 2015. While there is a three headed monster at the back of the bullpen, without quality starts our lineup won’t have enough firepower to carry an ineffective rotation.

Last year we were just happy when Tanaka could take the mound, but his line of 12-7 with a 3.51 ERA in 24 starts left a good amount to be desired. The hope is that with a cleaned up elbow, even with the tear still there, Tanaka will show flashes of his 2014 self. Between the adjustment to pitching every 5 days instead of once a week and trying to make sure his arm doesn’t fall off, the transition to the MLB has been less than ideal but 2016 presents an opportunity to turn things around.

My biggest concern for this rotation is that there is no clear stopper if we go on a losing streak. In Boston they have Price, in Queens they have everyone, but in The Bronx it’s not clear who would be the guy to step up and turn things around. If healthy, all of our starters have the ability to be that guy but also have obstacles in the way. CC is coming back from personal and health issues over the last few years, so while I see him being effective, asking him to be the stopper is probably a stretch. Severino and Eovaldi are still young and figuring out their stuff, so they will play big factors in this season but probably aren’t ready to carry that load. Pineda can be the best player on the field or his own worst enemy. He’s a body language guy that can let a game get away if he makes one mistake because he compounds that with more mistakes. That leaves us with Tanaka.

I’ve laid out everything working against Tanaka over the past 2 years but heading into year 3 of his time in New York, he is 27 years old and making $22mil a year. Between the fans realizing this and his own sense of pride I look for Tanaka to go all out to establish himself as the ace of this team and that all starts with a strong Spring Training and heading into cam ready to go.