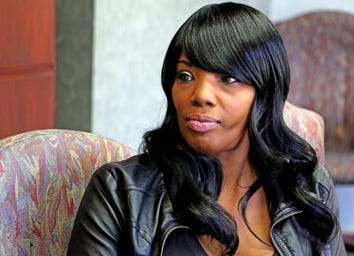 [KSR] Powell said that she dealt with Andre McGee until McGee left Louisville for the University of Missouri-Kansas City, after which she dealt with “Coach Mike,” who had some very interesting demands for her.

Katina Powell, the main hooker and the centerpiece of the situation at Louisville did her first interview in quite some time yesterday. She sat down with Matt Jones of KSR at an undisclosed location for safety reasons and delivered the greatest quote we’ll see in 2016.

“He was just telling me the type of girls that he wanted. He wanted white girls with big butts and big breasts and girls that could squirt to the ceiling and you know, things like that.”

SQUIRT TO THE CEILING. That’s just something you can’t unsee or unhear. Also, what an order by ‘Coach Mike’ the person who took over setting up the hooker parties (I guess they are parties?) after Andre McGee left. Real specific if you ask me. Squirt in general? Nah, not good enough. Squirt and hit Montrezl Harrell in the head? Not enough juice. Hit the fucking ceiling with bodily fluids and now we’re talking.

What I took away from the interview the most though? This a pretty serious situation that is FAR from over, especially if most of these allegations are true. Powell specifically named players like Harrell, Russ Smith, Chris Smith, Chane Behanan among others as people who were always at these events. On top of that she says at least seven to eight members of the 2013 title team were involved in this. Will they have to vacate victories from that season including the title? I doubt it. But, it will lead to a minimum of scholarship violations.

Now, when you watch the interview you notice the guy with her is her lawyer. So, while some of these answers are rehearsed and prepared by her lawyer, you can easily tell there’s validity in her statements. But, what really stuck out to me was when Jones and Powell were discussing if the scandal leads to Pitino’s departure.

The quick ‘no comment’ after the ‘I wouldn’t’ seems like there’s still something there which I’ve touched on last week regarding the tension between Pitino and Louisville’s President.

All in all it’s an interesting interview. Just remember the next time you have a request just ask for a girl that can squirt to the ceiling.