Great moment here. I don’t think there’s anyone on the planet, Milan Lucic included, who would argue with the fact that a change was needed, both for Milan and the Boston Bruins. It was time for everyone to go their separate ways. But goddamn if Lucic wasn’t a great Bruin. Even last year, as he went the team went. Which, to be honest, was the problem, as he was off more nights than he was on.

But from his first year here, when Lucic’s motor was running there was a different energy in the building and with the team. Someone on Twitter asked me what my favorite Lucic moment was and I think everyone’s has to be the Komisarek fight… 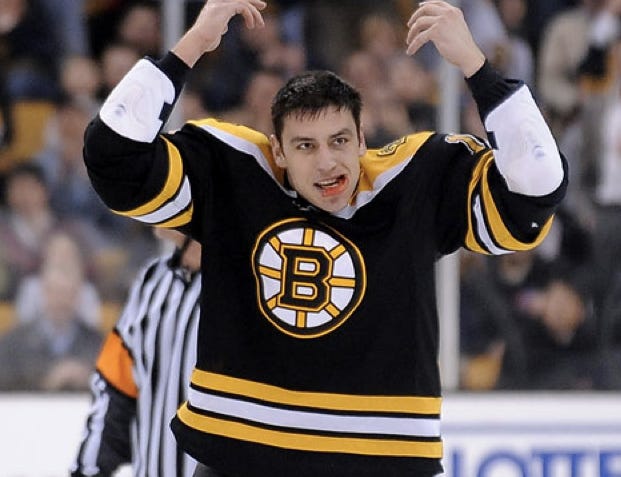 It was a great fight, but more than that it was a significant moment for the organization. The Bs decimated the Canadiens that game and this was the cherry on top. I’ll always remember that fight as the return of the Big Bad Bruins. The ass kicking of Komisarek followed by the taunting afterwards and riling up the crowd? Yeah that was an, “Oh boy, we’ve got a live one” moment.

Taking the Canadiens to game 7 as an 8 seed and after going down 3-1 the season before was big. But I feel like this was the official turn. When the Bs decided, “You’re not so bad. We’re back, you French fucks.” Milan Lucic had so much to do with that culture, the culture that eventually punched the Canucks in the mouth and won the Stanley Cup in 2011. For that, I’ll be forever grateful.

If you haven’t read Looch’s letter to Boston on The Player’s Tribune yet, here it is. Quite the read, made my nipples hard a time or two and my eyes well up a few others.