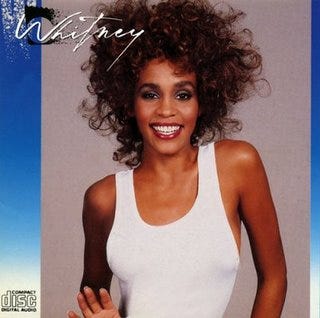 Whitney Elizabeth Houston – (8/9/63 – 2/11/12 ) was the definition of “wasted talent” as my piasan Lorenzo the bus driver says. Cranked out hits over the years, but never truly reached her full potential. I still say she’s the greatest female talent to ever do it..bar none. Celine may have had a better voice, but never put up the pop hits the girl from Jersey did. Taylor Swift may go down to sell 93 kajillion pop hits but doesn’t have the voice to kill a ballad. Mariah’s up there but doesn’t have the body of work. Whitney is kind of like the scene in He Got Game when the agent Dom Pagnotti is telling Jesus Shuttlesworth, “That’s like having speed and power in the NBA.”  Whitney had the pop appeal and the power ballad voice that was unmatched.

I personally associate Whitney with club music. A few years after her singles got remixed into absolute club bangers was about the time I started hitting “teen nights” at Avalon (the old Limelight), Exit, Deko, and a few other places I’m sure once I hear the name I’ll remember. East coast big city kids and clubbing went hand and hand , and when you talk club music you had to talk about Whitney. The teen nights turned into a regular affair in the city and down the shore in the summer. Whitney bumping every time. Over the years, I’ve scooped up her greatest hits CD, a few t-shirts, and spent more money in the jukebox at homecoming than any normal guy should to hear her songs. But like Whitney…we all have our demons. Over time I have also learned to appreciate her voice in the early point of her career as the best to ever do it.

Here’s my top list of her songs, I dare you to not sing along ….  first the Ballad section (somewhat in order) :

Like watching Doc Gooden on the mound for the first time… huge stage and just stepped right up and dominated. Letterman was the GOAT of late night, and Whitney used it to her advantage. Listen to that voice. Damn you Bobby Brown.

I won’t tell you (or my company) how many minutes I spent searching for a graduation slideshow set to this song, but I finally settled on this. 5 Kindergarten Graduations in my family, 5 slideshows of pictures in and around school of all the kids in the class set to Whitney belting out “teach them well and lettttttttt them lead the way.” Each time the parents bawling their eyes out to the pictures only to be disappointed/pissed they took a day off/ livid they pay tuition  10 minutes later when the teachers decided to had the kids sing some stupid song like “This Land is Your Land” that the parents already helped us learn 400 times that year. Good times. Seriously- can’t hear that song without thinking of kindergarten graudation.

Fun Fact : At my own Kindergarten graduation a kid received perfect attendance award for Pre-K and Kindergarten and wasn’t there to accept the award.  My Grandfather’s favorite graduation story of all time.

Two legends at the top of their games just killing it. Beautiful song…beautiful lyrics. Can’t say I’ve ever seen Prince of Egypt movie in my life though.

Considered the greatest rendition of all time, and it’s so far ahead of everyone else most people can’t tell you which one would even be MENTIONED to top it. Played before Super Bowl XXV (Go Giants !) After researching it a bit, I found out  Bob Best, the Super Bowl’s pregame show producer since the early 1980s, was ordered four days before the game to call Houston’s father and ask if she would record another version. As they feared her recorded version was “too flamboyant for wartime”. Luckily, Whitney’s answer was no.

The NFL was dead wrong in their worries as Liz Smith from Newsday stated  “a magnificent rendition.” Entertainment Weekly‘s Jess Cagle : “Her timing couldn’t be better: patriotism, thanks to the Iraqi war, is high, and Francis Scott Key’s 1814 ode to the flag is about to celebrate its 60th anniversary as our national anthem. The Gulf war fervor has turned Houston’s performance into an unlikely, overnight pop hit.”  It would go on to debut at #32 on the Billboard top 100.

This song has been played at essentially ever Little League game I’ve ever played in and I’m sure most of you reading this can same the same. Goes to the old motto, “if it ain’t broke don’t fix it.”  Why play anything but the best ? I stand behind my claim that in 2021 for the 30th anniversary they need to just play Whitney’s version on a video board at the Super Bowl. Anything else is a disappointment.

Tradition down the shore at D’Jais is Whitney’s version is played at the strike of midnight on The Fourth Of July. Proving that Whitney is the only thing that can tame the animals on the dance floor to honor the country, even if only for 3 minutes . Shout out to my guy Fun Anthony for the video.

OHHHHH!!!!!!!  You thought I would forget Whitney ran the made for TV game back in the day ?!?!?!?! No chance. Before Grease and Peter Pan whatever other crap they throw out there now. Whitney was out killing it on ABC as the Fairy Godmother.

The only thing I write on my prenups is that this song will be our first dance. Give me 4 minutes dancing in each other’s arms to the greatest love ballad of all time to start the marriage and I’m certain it won’t fail.

She said that in an interview to MTV’s John Norris and I know she meant it. She may not have recorded them originally as club bangers, but I feel like that was her code to the DJ’s of America to start working. Either way, her songs have been remixed into classics. Here’s a list of my favorites :

The farewell tour if you will… released in 2000. One last banger for the clubs. Thanks Whitney.

Not her best work… but still a pretty solid track.

Quick story on this one : Had to get a ride from my friend Sal to a Graduation party, he told me meet at his house early in the morning. His mother cooked us breakfast, this song was on in the background. She starts singing just as I do. Turns out she was as big fan even saw her in concert a few times. Tried to convince her to give me the ticket stub she said ” Not a f’ing chance, now eat your eggs.” In fairness I would have framed the thing too.

Jonathan Peters ROCKING  at Roseland Ballroom just how I like it. Was a tough decision between this and number 2. Ultimately made this #3 because overall, the lyrics are a notch down and it didn’t bump as hard as :

Best version is below. I lose all respect for clubs if they don’t play the entire 9 minutes Thunderpuss Remix version. Nothing like drenching sweat through your v-neck  after frolicking and belting out “I’M GONNA MAKE IT ANYWAY !!!” Lasting the 9 minutes truly separates the veterans from the rookies .

No remix needed, although you can find plenty if you want. Just give me her best song and the ultimate everyone dances to song of all time. Block parties, weddings, clubs, you name it.

True story : My friends call me all the time and after 5 seconds of muffled noise I make out “the heat with somebody” and immediately laugh/dance/ have a good day.  When I miss the call they leave it as a voicemail. I listen to them on tough days.

We will never see another female artist quite like Whitney, nor will another’s music mean more to the club scene then hers did. In all seriousness- shame she never got her life together or shake her demons. The world would have enjoyed her music much longer than it was able to. Rip Whitney