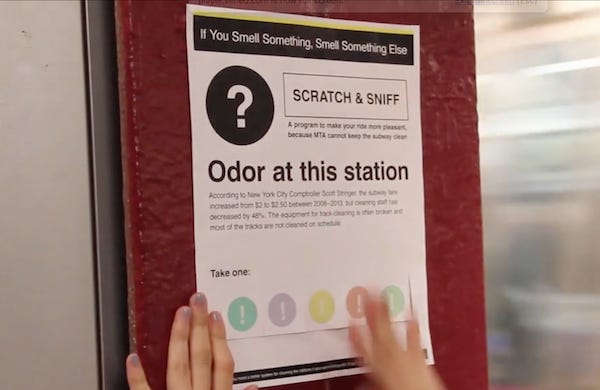 Gothamist- If you haven’t fully embraced the scent of the New York City subway system, then you’re not a real New Yorker. But if your delicate olfactory system is offended by the smells that have developed on the platforms over the years, then this art student has something for you.
SVA’s Angela Kim has created a scratch n’ sniff sign and placed it in various locations underground, telling passersby: “If you smell something, smell something else.” (A clever nod to the MTA’s “If you see something, say something” warning.) The scents can be pulled off like tabs on a Dan Smith flyer, and provide scents like vanilla, lavender, orchid, magnolia and tuberose.  According to Untapped Cities, she’ll be posting them all over throughout the month, and they’ve already been placed in Canal Street, Union Square, and Herald Square stations.

If you are going to ride the subway, you have to earn it.  It is not a place for vanilla, lavender, or orchid.  It is a place where you close your eyes, do everything in your power not to smell anything, try to avoid touching anyone or anything in that underground labyrinth from hell, and turn your the volume up in your headphones as loud as possible not to listen to your podcast/music but to avoid hearing yoursurroundings.  And of course you do not eat anything underground in the subway.  That air is basically poison.  If you open your mouth for even a second, you are getting so many rat pubes and recycled air that was once Homeless Person Smell.  Opening your mouth in the subway is like touching hot lava or stepping on a crack as a kid.  It’s not something that is actually going to harm you.  But you should go out of your way to avoid doing it.

That being said, scratch and sniff technology has always fascinated me.  Adult coloring books were the big Christmas gift for girls this year.  I think scratch and sniff books are the next big thing.  Maybe the infamous Barstool book can be scratch and sniff when it gets released (jk, nobody wants to smell what blogging life smells like).