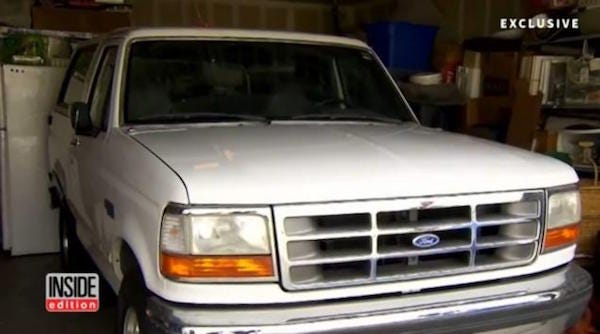 Inside Edition- For more than 20 years, the whereabouts of the white Ford Bronco from O.J. Simpson’s low-speed chase remained a mystery. Until now.

INSIDE EDITION has tracked down the vehicle Simpson was in when he and Al Cowlings led police on a chase following the murders of his wife, Nicole Brown Simpson, and her friend, Ronald Goldman, in 1994. Over the years, there has been speculation about where the 1993 Ford Bronco is kept. INSIDE EDITION can now confirm that it is housed in prime condition in a garage in Central California.

The owner, whose name will be revealed on Tuesday’s show, says he’s only put around 20 miles on the car since having it, but he invited INSIDE EDITION’s Jim Moret along for a drive. The owner said he bought the car as an investment and he’s now trying to preserve everything original from it – even going as far as keeping the tires in the trunk and taking the gas out to store it in a gas can. “It’s iconic,” he said. “It’s part of history.”

O.J. Simpson. The white Ford Bronco. Inside Edition. All we need is some pogs and the Knicks to be contenders for it to actually be the mid-90s again.

I have to give it to the guy that owns the white Bronco. He was biding his time, waiting for the perfect moment to strike, like Lois Einhorn during Super Bowl week (another timeless treasure from 1994). The People v. O.J. Simpson appears to be a hit. Tonight’s episode is the white Bronco chase. There is no telling what the resale value could be with a well place Kim Kardashian tweet about her dad or Kanye verse about the car. And having Inside Edition report about it adds the perfect amount of nostalgia to it. Strike while the iron is hot is the key to business. I guarantee Rav 4 sales plummeted after Jesus Walks dropped. But God knows what incredible market could form for this one-of-a-kind piece of American history. Just an incredible conversation starter. “Wanna see the car that stopped the world for a few hours and where O.J. almost blew his brains out?” Sure beats the hell out of some boring 2016 SUV with better gas mileage.

And I cannot WAIT for tonight’s episode of The People v. O.J. Simpson. I said last week I am excited to see who plays Sam Cassell. But as a Knicks fan, I also can’t wait to see who plays Patrick Ewing. They have to mention Game 5 of the NBA Finals, right? It made it all 50% more surreal. Or they could do this, which would be tremendous: